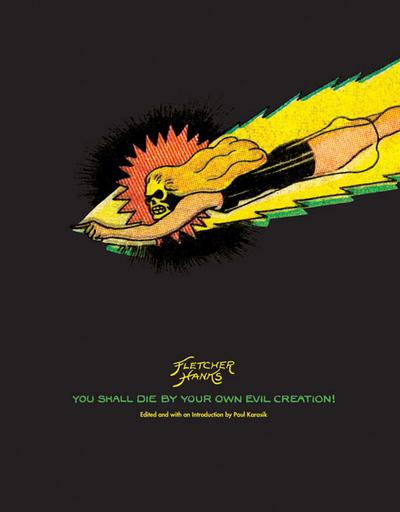 With I Shall Destroy All the Civilized Planets an Eisner Award winning success, curator Paul Karasik’s second Fletcher Hanks collection gathers the remaining strips produced during his flurry of activity between 1939 and 1941.

Hanks’ era was the start of comics as we know them in the USA. There were no rules, and often no sense, and this is another jaw-dropping selection consistently prompting wonder at exactly what Hanks was channelling to produce them. How did he come up with a name like the Super Fiend of the Lost Planet? Or Rip-The-Blood? And what would make anyone consider them suitable? That’s the essence of his unique sensibilities in stories covering multiple genres under many aliases. He was Barclay Flagg, Hank Christy, Lance Ferguson, Chris Fletcher, Henry Fletcher, Bob Jordan, Carlson Merrick, Charles Netcher and C.C. Starr, but his mountain-jawed men are instantly recognisable under any name.

With the exception of unintentionally hilarious stories about hulking lumberjack Big Red, as 1940 turns into 1941 almost everything Hanks produces is influenced by the awareness of war in the real world. Saboteurs and fifth columnist even make their way into the jungle adventures of Fantomah, and the assorted alien tyrants Stardust and Space Smith face are intent on conquering entire planets or destroying them. In Hanks’ world America’s enemies have millions of troops and thousands of hidden planes set to launch against the USA at a moment’s notice. Thankfully, in Africa at least, Fantomah is able to send every jungle lion flying into the sky to savage would-be invaders arriving by parachute.

There’s an incredible energy to the stories, with Hanks applying an old testament sense of justice throughout. When “Super Spy” Yank Wilson spots a group of known saboteurs enter a building he blows it up. The pacing is incredible. In one sequence Martian reptiles land by Earth’s biggest cities, rampaging through with gas guns to subdue the population, march humanity to rockets fired from space guns and send everyone into space. Hanks dashes that off in six panels. He’s equally economical with his art. Stardust on panel is viewed from what would be a distance of a few miles as he lays about invading space fleets numbering half a dozen craft, often reduced to black outlines. That exemplifies another odd aspect of Hanks’ approach. Beyond the grotesque distortions he passes off as people, he’s one of the few artists, even working at the dawn of comics, where it’s often almost impossible to get the gist of what’s happening from the art alone. He uses abstracted pictures of planets, planes or cannons while the captions tell the story.

From any logical point of view the stories are insane. A sock to the jaw of any alien usually sends their entire race into retreat. Stardust hears the Super Fiend of the Lost Planet saying civilisation must be destroyed, but doesn’t bother intervening as every inhabitant of Mars is burned to death, only putting an end to the Super Fiend’s plans when he threatens Earth. Of course, the lack of logic is what makes them such a delight generations later.

Karasik’s enthusiasm in bringing Hanks to a wider audience is much appreciated, but it’s possible to overdose. Hanks is so bizarre, so disconnected with what we know as comics, that any half dozen of his stories provide his essence. For the really committed, however, his entire output is available in hardcover as Turn Loose the Death Rays and Kill Them All!