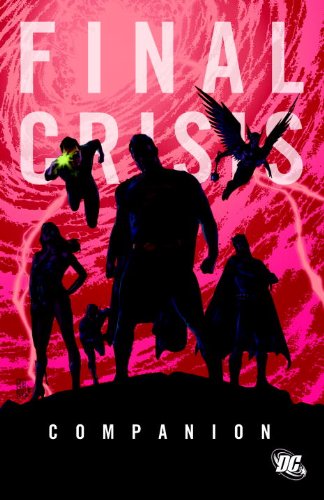 The sheer scope and density of Final Crisis made it inevitable that more stories would be told to explain aspects of the plot. Final Crisis: Companion collects some of those tie-ins, and a few extras that shed more light on events.

First up is ‘Director’s Cut’ containing the plain pencil work of J.G. Jones with a separate script by Grant Morrison for the first section of Final Crisis, providing insight into the creative process. Additional commentary between Morrison and Jones on their efforts is banal and a bit too self-congratulatory.

‘Balancing Act’ covers the development of Libra, his role in events and how he has come to work for Darkseid, penned by his creator Len Wein with artwork by Tony Shasteen. Wein elaborates on the character by using Libra’s flashback narrative, while Shasteen’s art is redolent of Libra’s first appearance in 1974. Final Crisis was only Libra’s third appearance so it seems fitting that Wein re-tell his story, but it’s only satisfactory rather than outstanding.

Similarly satisfactory is ‘Resist’, a tale from the perspective of Mr Terrific, Snapper Carr and Cheetah as the remnants of government agency Checkmate resist the anti-life equation, written by Greg Rucka and Eric Trautman. Ryan Sook and Marco Rudy keep the the story looking apocalyptic and dystopian with dark reds and blues as a lens through which events are viewed. In very much the same way as the last third of Final Crisis begins to lose traction, so does this. It introduces co-ordination of the final counter attacks in Crisis, and the Omac role in the resistance, but is inconsistent, lacks cohesion and there’s no certainty as to where this fits.

By far the best contribution is ‘Requiem: Caretakers of Mars’ by Peter J. Tomasi, and pencilled by Doug Mahnke, detailing the murder of Martian Manhunter J’onn J’onzz. The story is moving in its written and artistic detail, his murder both brutal and harrowing. There is a shocking fiendish ecstasy in rogues delivering all their wrath on a long-standing enemy, but J’onn’s true potential is magnificently showcased as he fights back in a desperate bid for survival. It’s also a very succinct and tender origin story of the Martian Manhunter, deftly covering his history and major moments in DC Comics since 1955 by telling it in flashback through a telepathic link with five old friends from his days in the Justice League.

The other stories explain some key points in Final Crisis but ‘Requiem’ adds depth, while also explaining finer plot points in Justice League of America: When World’s Collide and kick-starting future JLA events. J’onn J’onzz was more than a colourful addition to the JLA, he was its soul and if the way his death was told in Final Crisis felt shocking but unsatisfactory then this more than makes up for it.