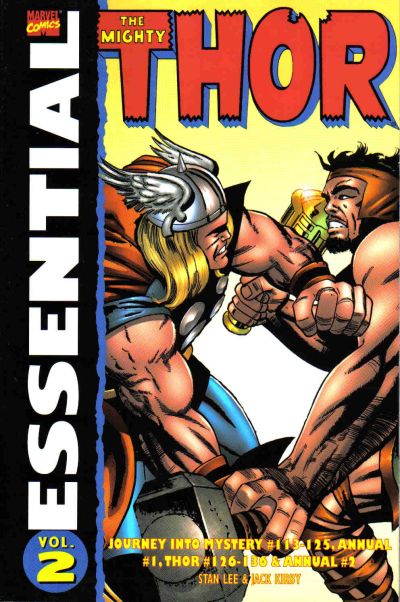 There’s a strong case to be made for this selection of material being the best possible collection of Jack Kirby’s Thor if restricted to a run of consecutive issues. The caveats are that it’s black and white, and more importantly the use of poor quality copies for production purposes results in several pages toward the end of the book so muddied as to fall well below any reasonable expectation of inclusion.

The comics reprinted span 1965 to 1967 and the reason this is a stronger collection than page after page of Kirby at his best on Thor (see Essential Thor 3 or 5) is because this content charts the phenomenal growth of Jack Kirby both as artist and plotter. While the opening stories aren’t as cramped as those in volume 1, Kirby’s still restricting full page illustrations to the splash page, the stories are still set primarily on Earth, and when he does look in on Asgard there’s little splendour beyond the costumes and pageantry. The scenery is basic. By the end of the book there are consistent breathtaking illustrations of surroundings befitting the living quarters of Gods, and much more in the way of stunning art. Kirby experiments with surrealism when encountering Ego, the Living Planet, with photo collage to depict the wonder of space, with the super-advanced technology of the Colonizers and even throws in a wonderful full page of the planet devouring Galactus as a cameo. The artistic progress is breathtaking.

Thor’s plots progress at a similar pace. By the end of the book there’s no longer a writer and artist division in the credits, with Kirby credited alongside Lee in far less specific terms. Due to the poor and contradictory memories of both creators its not possible to establish the exact point at which Kirby’s plotting input exceeded that of Lee, but it would appear to be relatively early here. To discount Lee’s contribution too much, though, is making a mistake. He supplied a light, sardonic touch to the dialogue without undermining Kirby’s ambitious intent, and the stories are better for it. They’re not better for Vince Colletta replacing Chic Stone’s far more refined inking of Kirby’s pencils a third of the way through this collection. Not only does the poor reproduction in places far more affect Colletta’s finer lines, he also leeches power from Kirby’s pencils. It’s very obvious when comparing facial features by different inkers.

This collection also sees Thor moving from his first incarnation of appearing primarily on Earth, to adventures based more in Asgard, then in space as the wonder increases almost by the page. Not to downplay all the Earth adventures however. The introduction of Hercules isn’t great, but a second meeting in the then present day is fantastic. Hercules plays to Lee’s writing strengths, and is tremendous fun while he’s around.

A few stories aren’t great such as bizarre kidnapping of Jane Foster, and the Absorbing Man initially outstaying his welcome, but over the long term all plot developments are positive. Loki’s villainy had become repetitive, and he’s sidelined. Jane Foster’s presence had become a hindrance, so she’s featured less, then written out, and when the ‘Tales of Asgard’ back-ups run into a dead end, they’re quickly reconfigured. By the end of the book we have Thor as consistently, jaw-droppingly thrilling.

The material is also available in colour spanning the first and second volumes of The Mighty Thor Omnibus, as Marvel Masterworks Thor, mostly volumes 4 and 5, and the early material features in the Epic Collection When Titans Clash.