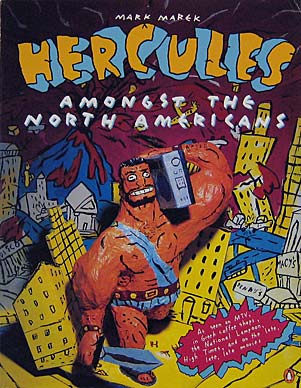 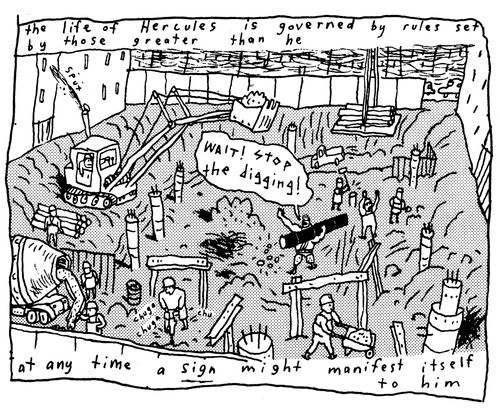 Toying with the bathos of anachronism, Mark Marek deposits ancient Greek demi-God Hercules in 1980s New York for a series of daft encounters with the modern world. The pompous mythologising captions play well as Hercules flexes his mighty sinews to prise open the doors of a subway train, consults rat entrails to divine favourable conditions for financial investment or shows his appreciation for a fine meal by vomiting into a large vase. No, this isn’t subtle humour, but it’s very funny. Some strips appeared in National Lampoon, but they could equally be placed in the UK’s Viz Comic.

A joke that plays particularly well is Hercules regularly failing to find fulfilment with modern day women. One fruitless night of revelry at the lap dancing club ends at the porn cinema, his approximation of the golden fleece fails to impress, and his eventual marriage is a disaster. Another repeated gag is the series of ill-suited jobs Hercules requires to pay his rent. The most obvious solution, the building site, is short-lived due to his habit of divining ill-augur from random collections of stones.  Rescuing a maiden from a corporation hastens the end of his messenger career, and perhaps switchboard operator was not a good choice to begin with.

Marek’s deliberately crude, distorted and scratchy art won’t hold universal appeal, but there’s something tremendously liberating about it, and the exaggerated flatness throughout brings to mind ancient Greek decorative murals. It’s a point Marek underscores with a page of faux amphora illustrations.

As the online asking price is now ludicrously high for a relatively slim book, isn’t about time it was reprinted?