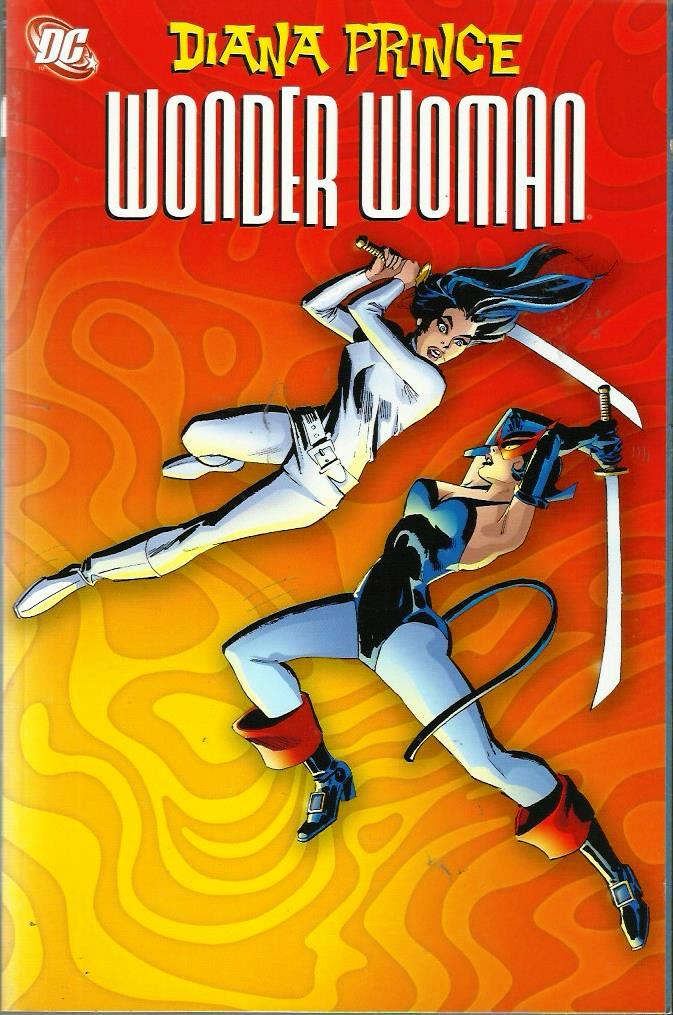 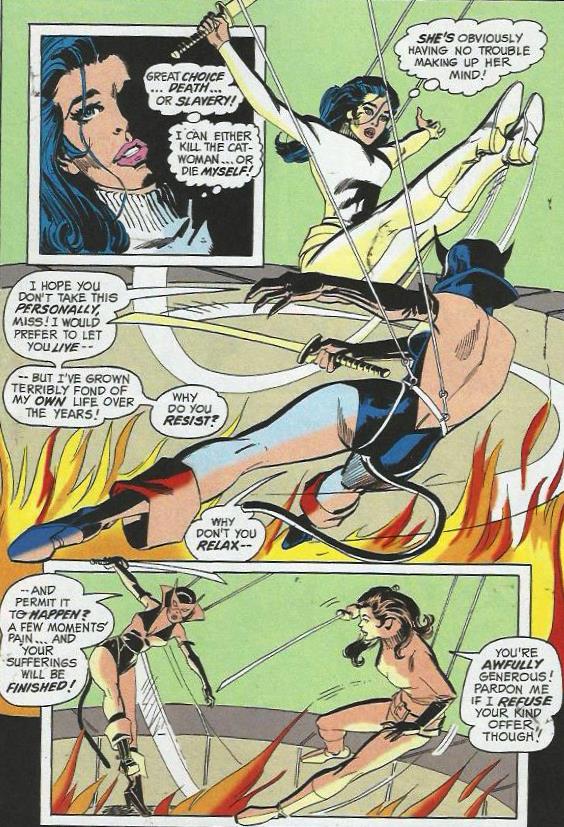 This is the final volume collecting the ‘New’ Wonder Woman – in which our heroine lost her super-powers and had to find her way as a highly-skilled mortal adventuress. Denny O’Neil, having co-scripted earlier issues, stepped up as writer, after the abrupt departure of Mike Sekowsky, who had been writer, artist and editor for the previous couple of years. In fairness, the quality is not only maintained, but improved from the previous rather bland third volume. Diana becomes embroiled with a bodyguarding gig, which results in her being ensnared once again by Dr. Cyber, now blaming Diana for her disfigurement and seeking a new, unmarred body to house Cyber’s evil brain – and who better than her dearest enemy?

From there, in the bait and switch tradition established by Sekowsky, we turn from terrestrial crime to high fantasy, as Diana, Ching, the Catwoman, and luckless investigator Jonny Double travel to another realm and meet Fritz Lieber’s creations Fafhrd and the Grey Mouser. This was a back-door pilot for the latter duo’s own series in Sword Of Sorcery that nevertheless stands on its own as a rollicking adventure tale.

After an opening entry from Don Heck, most of this run was drawn, rather beautifully, by Dick Giordano, who had previously inked most of the Sekowsky issues, and who was clearly putting his best Modesty Blaise gloss on the series.

After yet another fatuous cross-over from Brave & Bold – this one perpetrated by ‘Barking’ Bob Haney, and surely the most inept Wonder Woman team-up of all, the new writer on the regular series, Samuel R. Delaney, took the series in a direction that showed considerable, if unfulfilled, promise.

Although the issue, as originally released, attracted criticism – straplined as “A Special Women’s Lib Issue”, its cover presented a bound, gagged, and definitely un-liberated young lady with hooters front and centre. It was nonetheless an intelligent and thoughtful presentation of some of the dilemmas facing working women at the time, and it would have been interesting to see where Delaney would have taken the series.  Unfortunately, that was not to be.

The prospect of a media tie-in – and, it is rumoured, some influence by Gloria Steinem, editor of Ms. magazine, who expressed outrage at the idea of a de-powered Wonder Woman without, one suspects, actually reading any of the stories – caused DC to abort the ‘New’ Wonder Woman. To be realistic, they wouldn’t have done so if the series’ sales hadn’t been slipping anyway. With the cliffhanger of Delaney’s debut issue ignored, the next issue a sniper struck down Ching and sent Diana into amnesiac shock, and she, presumably reacting like a salmon returning to its spawning ground, found her way back to Paradise Island (now inexplicably back on Earth), where Queen Hippolyta re-programmed her with super-powers. It makes no more sense if you’re actually reading it. This bodge job was the work of Robert Kanigher, the man who, scant years previously, had driven the title to the edge of cancellation, and looked intent on doing it all over again. With ugly, scratchy art by an uninterested Don Heck, it was a sad coda to a generally exciting and inventive run for one of comics’ longest-serving characters.