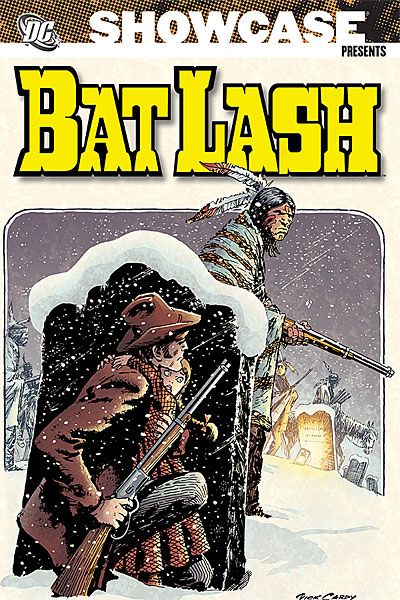 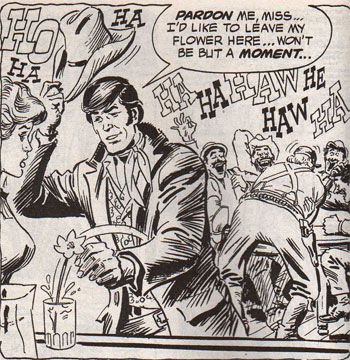 From the late 1960s to the mid-1970s DC’s editorial policy was positively eccentric, in hindsight very much of the throw it against the wall and see what sticks nature. This was an era when sales departments sold what they were given rather than dictating what sold, which encouraged free expression and produced some delights. One was Bat Lash, and in the absence of a lavish full colour reprint volume like they have in Italy, this pulp paper collection is a good value gathering of an excellent strip.

Western hero Bat Lash is a study in contrasts. As effete as they come, he’s a serial womaniser. He claims to despise violence, yet is a quicker draw and better shot than anyone he encounters. There’s an ongoing debate as to his creation, but the similarities in tone to the early 1960s TV show Maverick are unmistakable. It’s Nick Cardy who illustrates most of the material here, and is credited with writing the third story, and he remains woefully under-rated. His pages are stunningly designed and stunningly realised, his characters equally stunning, and his exaggerated comedy just the right side of over-egging.

Most of the material here originates from 1968-1969. According to an editorial page in one of the original issues they’re plotted by Sergio Aragonés from suggestions supplied by Editorial Director Carmine Infantino and scripted by Denny O’Neil. Most of their stories start with Bat Lash having to escape from a woman or their partner, then wandering away into trouble elsewhere. He’s a self-centred, loveable scoundrel, whose better nature bubbles to the surface when his conscience is pricked. Yes, it’s slapstick, but very well plotted and drawn slapstick that holds its charm almost fifty years later. Among the oddities are Aragonés himself starring as a rogue in the sixth tale (and referenced in the second), and Cardy frequently including a pair of characters resembling Laurel and Hardy. The comedy elements are dropped altogether for the final two chapters by Aragonés and O’Neil which delve into Lash’s tragic background, explored further in the 2008 Guns and Roses graphic novel. It’s the equal of the previous work by all concerned.

It’s the 1960s material that’s essential, but the 1978 and 1981 revivals both match the spirit of the original without delivering the overall quality. O’Neil writes the first, nicely drawn by George Moliterni with Lash wandering into San Francisco’s Chinatown for gambling purposes, and it’s gambling that’s at the heart of Len Wein’s later story set in New Orleans. Dan Spiegle’s art isn’t to all tastes, but he’s a consummate storyteller.