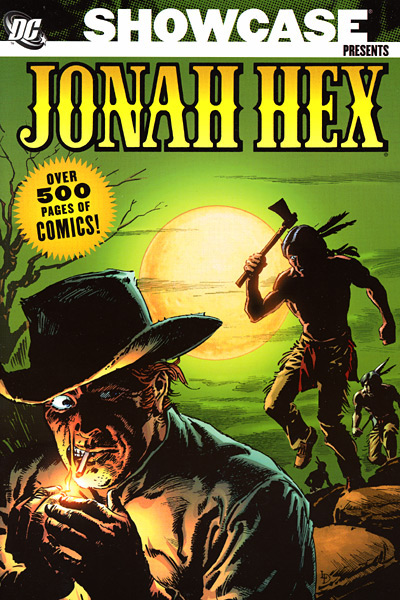 John Albano created Jonah Hex, basing the deadshot bounty hunter’s surly character on the uncompromising Man with no Name as portrayed by Clint Eastwood. Publication in a comic titled Weird Western (to capitalise on the horror comics boom), required an extra element, though. Albano, possibly inspired by Batman villain Two-Face, and artist Tony DeZuniga designed an unforgettably gruesome face. Hex’s upper lip curls back displaying his teeth, a thread of flesh connects his inner cheek with his chin across his mouth, and his right eye remains wide open and staring. De Zuniga’s contribution exceeds the stunning look. Filipino artists found a lot of comics work in the 1970s due to their ornate, decorative style. DeZuniga flies in the face of this depicting jagged, grubby characters inhabiting a barren landscape.

Albano’s stories, focus almost exclusively on Hex. He’s only off-panel for dramatic purposes, concealing himself to bushwhack someone, or for an outraged town to comment on him. The one exception is a prolonged depiction of the type of person Jonah Hex hunts down. He’s absent until the conclusion when some old testament style justice is imparted. The best of Albano’s stories, all well illustrated by De Zuniga, is a town under the brutal heel of a wheelchair-bound old woman and her two thug sons.

After a dozen stories by Albano and one from Arnold Drake, the writer most associated with Jonah Hex stepped in. Michael Fleisher seized on the sordid tales of revenge and retribution and upped the ante. He conceived the tagline that so memorably encapsulates Hex: “He was a hero to some, a villain to others, and wherever he rode people spoke his name in whispers. He had no friends, this Jonah Hex, but he did have two companions: one was death itself… the other the acrid smell of gunsmoke.” Fleisher starts by aping Albano’s sparse style, but rapidly progressed, shifting his focus beyond Hex, and fleshing out the folk who’d soon have one of his bullets embedded. Yes, there’s a predictability to the outcome, but Fleisher is so perversely inventive in reaching that point that it’s irrelevant. While telling a complete tale in each episode, Fleisher also adds elements of continuity, with a slow-release plot delving back into Hex’s civil war days.

There’s a mystifying credit to Russell Carley for either art or script continuity on the earliest of Fleisher’s tales, later explained as breaking down Fleisher’s full scripts for the artists. And what a fine bunch they are. There’s no substandard art in this collection. José Luis García-López, George Moliterni, Noly Panaligan, De Zuniga, Luis Dominguez, and the rare treat of Doug Wildey all turning in fantastic pages.

This collection also comes with bonus material starring the less memorable Outlaw and Billy the Kid, but still with spectacular art from the likes of Neal Adams, Gil Kane, Gray Morrow and DeZuniga. If only the space could have been found for the Alex Toth strip that appeared alongside Hex in Weird Western 16, a career highlight from a genius.

For those preferring their Jonah Hex stories in colour, a greatest hits titled Welcome to Paradise was published in 2010, with most of the material taken from this collection. A second Showcase collection followed.