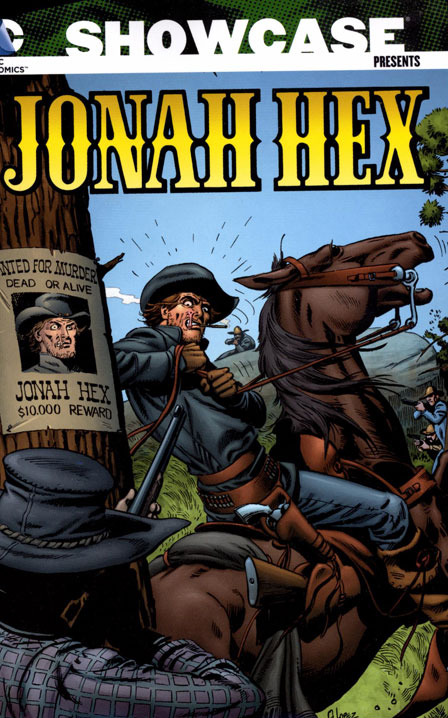 Jonah Hex exemplified the rough frontier life, eking a living as a bounty hunter for people who’d otherwise shun him, and surviving via a combination of his wits, his facility with a pistol and his fearsome reputation. A loner by inclination, his gruesome disfigured face would ensure he remained that way. Over the years he’s become comics’ greatest Western hero. Or anti-hero, depending on your views covering a number of issues.

What differed writer Michael Fleisher from his peers was a prodigious macabre talent for providing imaginatively violent and shocking material. ‘The Hangman’ is among the best of the early stories and typifies Fleisher’s approach. Hex meets an eccentric companion, there’s a corrupt official, a twist, and a high dose of moral repugnance at the conduct of a town for which a hanging is a day of festivity. Illustration by excellent Argentinian artist George Moliterni helps, with clear and action-paced storytelling.

Moliterni is a great Hex artist, Luis Dominguez a master of delivering a grubby Western environment, and José Luis García-López always excellent, but the art quality dips after their departure. Spanish artist Vincente Alcazar draws the majority of the remaining stories, his art solid enough in places, but plain slapdash in others. His often cramped approach works best with a gothic and claustrophobic tale set in a circus freak show.

A problem with Hex’s reputation as such a sure shot was the lack of recurring foes integral to the success of ongoing characters. Fleisher’s solution was Mexican bandit El Papagayo, so named for the parrot that accompanied him. He’d return in the 21st century Jonah Hex series, and played a pivotal role in the standalone No Way Back. He’s part of a plot to set-up Hex, and when that fails Hex is framed for murder. The chapters of Hex on the run attempting to clear his name long outstay their welcome, but in the middle of the run Fleisher delves into Hex’s past with a good sequence revealing how his face became disfigured and introducing the monster that is Hex’s father.

By the back end of the collection Fleisher appears to have lost interest. He’s replaced for a few stories by David Michelinie, but his plots become standardised, lacking the shocking qualities that characterised his best work, and dragging over the longer material. It was Hex’s creator John Albano who’d first run the plot of a beautiful woman being inexplicably attracted to Hex, and it was barely convincing then, yet it recurs twice in this collection. The best of the later material is Hex embroiled in a power struggle over a European state delivering the type of retributive conclusion at which Fleisher excelled.

This bulky black and white volume is a value for money collection, but while still delivering some excellent material, it doesn’t match the first Showcase Presents Jonah Hex volume. A couple of the better stories, including the debut of El Papagayo are presented in the colour anthology Welcome to Paradise.