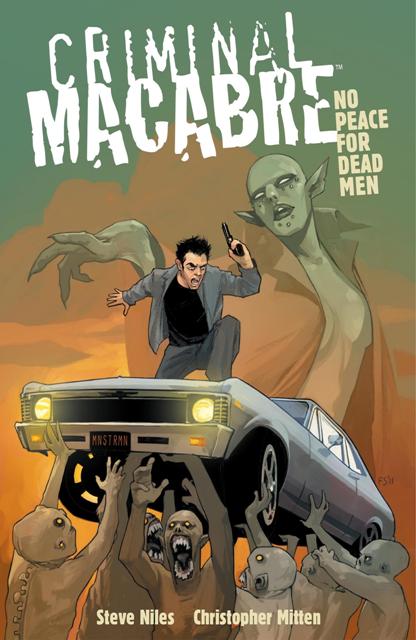 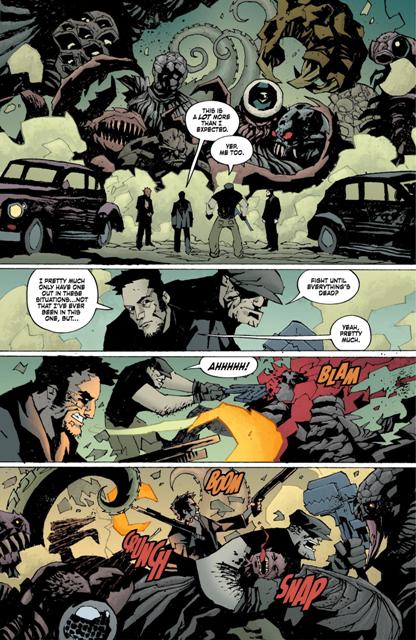 Steve Niles gained fame with the breakout vampire series 30 Days of Night, but his private detective specialising in the occult Cal MacDonald had been rattling around in his head for years, only occasionally making it to the page. Thanks to Niles’ vampire horror sleeper hit Cal could take up residence in his own series Criminal Macabre, No Peace for Dead Men being the seventh in the series. It collects five stories in total all written by Niles and illustrated by Christopher Mitten, who previously worked with Niles on 30 Days of Night‘s reboot.

In ‘Call Me Monster’ someone or something claiming to be Frankenstein’s Monster approaches Cal and his ghoul partner Mo’Lock for help. They have been running from the descendents of their creator for 200 years, with the new lot more determined than most. It’s a funny tale with a message about standing up for yourself you’re never too old to hear.

‘When Freaks Collide’ is a cross-over with Eric Powell’s The Goon, Powell co-writing. Various organised crime syndicates of various monstrous fraternities are at war with each other and terrorising the human population. At the centre is a mystic artefact that allows the bearer to mould the world to their own ideas. Both Cal and the Goon are separately hired to investigate, but team-up when they get the feeling they are both being played. Considering both franchises are quite similar in theme and published by Dark Horse, it’s surprising they haven’t teamed up before now.  There’s action galore in an off-kilter story stylishly rendered by Mitten who crafts some fantastic looking monsters.

Title story ‘No Peace for Dead Men’ returns the series to regular Criminal Macabre chronology. Cal’s history with the ladies is disastrous, but now a female vampire named Salem claiming to have a personal history with Cal is rounding up his enemies and killing off his allies. It’s a new chapter for Cal and Mo’Lock, Niles doing away with ideas initially fun but now stale and tying up plot threads from way back in Two Red Eyes. The consequences roll over into ‘Die, Die My Darling!’ when siblings Darren and Virginia deliver some disturbing news. That news only gets worse in ‘Fight By Night’ when a local politician is beheaded at a public rally. Cal and Mo’Lock go tracking down the assassin only to discover a sinister conspiracy that runs all the way to the top of local government.

Niles has a peculiar habit of veering off to write a little tale within a tale that always has a purpose in developing the series later on, sometimes as much as three books later. It’s an impressive ability as he never misses a tick when he picks it up again later, but if his intention isn’t known it can be distracting. Artistically Mitten has a cubist style, and his work is expressive, dynamic, stylish and engaging. His influence is clearly Mike Mignola (he will later work on Hellboy), his monsters bloody good, but there is still a definite progression taking place. Mitten and long time colourist Michelle Madsen are still learning to work together at this stage, the dark colour meaning the art really requires study for the full appreciation.

No Peace for Dead Me heralds a fresh vibrancy to the series with Niles’ partnership with Mitten continuing for a further three volumes, the next being the crossover with 30 Days of Night, Final Night. Both are found in the Criminal Macabre Omnibus Volume 3.