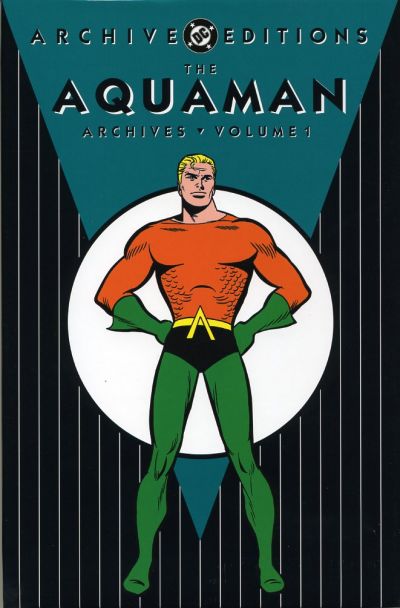 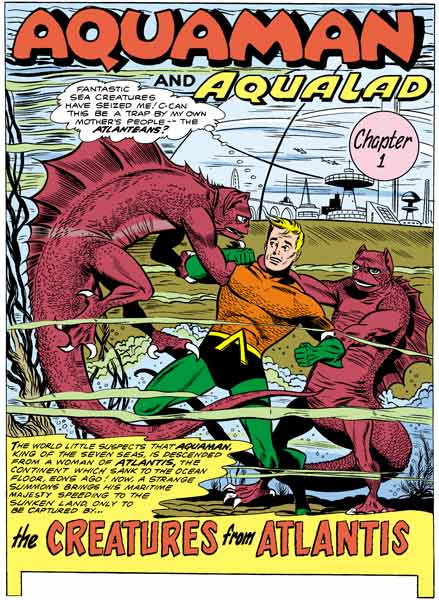 Batman, Superman and Wonder Woman survived DC’s superheroes plummeting into obscurity from the mid-1940s, but largely unsung back-up features also kept Aquaman (and Green Arrow) in the public eye from the early 1940s to the early 1960s.

This Archive Edition picks up in 1959, with Aquaman’s strip well established under Robert Bernstein and the pure cartooning quality of Ramona Fradon. It collects 22 back-up strips, and ends with the tryout features testing the waters for Aquaman’s own title. These stories are also available in black and white as the opening volume of Showcase Presents: Aquaman, which includes a couple of extras missing here. If you need to see Aquaman and a doctor turning Lois Lane into a mermaid, that’s where to head.

Bernstein’s new and definitive origin casts Aquaman as the offspring of a lighthouse keeper and a woman from the undersea city of Atlantis, accounting for his underwater abilities and his being able to communicate with marine life.

Always captivatingly illustrated, the stories range from simply charming to simply amazing examples of all-ages action that ranks alongside the best the company could offer at the time. ‘Aquaman Duels the Animal Master’, ‘The Undersea Hospital’, ‘The Great Ocean Election’, ‘Aquaman and his Sea-Police’, ‘The Secret of the Super Safe’ and ‘Aquaman Meets Aquagirl’ are all fine, entertaining tales. However, in 1959 crossovers were exceptional rather than usual. It’s a novelty, then to see Shark Norton trade territories with Green Arrow’s foe the Wizard with Aquaman fighting on dry land whilst the Emerald Archer pursued his enemy beneath the waves in his own strip. Illustration is by the great Lee Elias.

‘The Adventures of Aquaboy!’ supplies a look at the early years of the Sea King, and following that a permanent sidekick, Aqualad, was introduced in ‘The Kid from Atlantis!’ In quick succession came ‘The Menace of Aqualad’, ‘The Human Flying Fish!’, ‘Around the World in 80 Hours’, ‘Aqua-Queen’ (scripted by Jack Miller), and the intriguing mystery ‘The Interplanetary Mission’.

It originally appeared a few months after the debut of the Justice League of America and concerned a plot to secure Kryptonite from the sea-floor. Although Superman doesn’t appear, the threads of shared continuity are being woven. Heroes would no longer work in insular solitude.

‘The Aqua-thief of the Seven Seas’, ‘The Underwater Olympics’, ‘Aqualad Goes to School’, ‘Silly Sailors of the Sea’ and ‘The Lost Ocean’ were a fairly mixed bag which just served to set the scene for a Big Event.

Jack Miller and Fradon expanded the origin of Aquaman in the full-length epic ‘The Creatures from Atlantis’, wherein extra-dimensional creatures conquer the sunken civilisation. From this point on the fanciful whimsy of the strip would be downplayed in favour of a more character-driven drama. The penultimate story in this volume is tense thriller ‘One Hour to Doom’ before we bow out with the first appearance of Nick Cardy who would visually make Aquaman his own.

‘The Sea Beasts From One Million B.C.’ is a wild romp of fabulous creatures, dotty scientists and evolution rays that presaged a new path for the King of the Seas, but that is for another time and another volume, as this is the sole Aquaman Archive edition. More can be found in Showcase Presents.

This is innocuous yarn-spinning with quality artwork. Why not treat yourself and your youngsters to a timeless dose of whimsy? 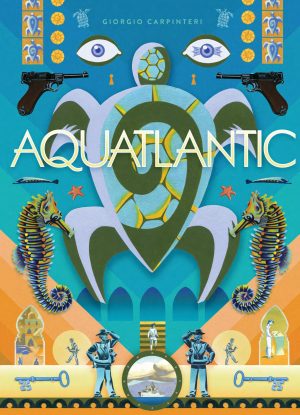