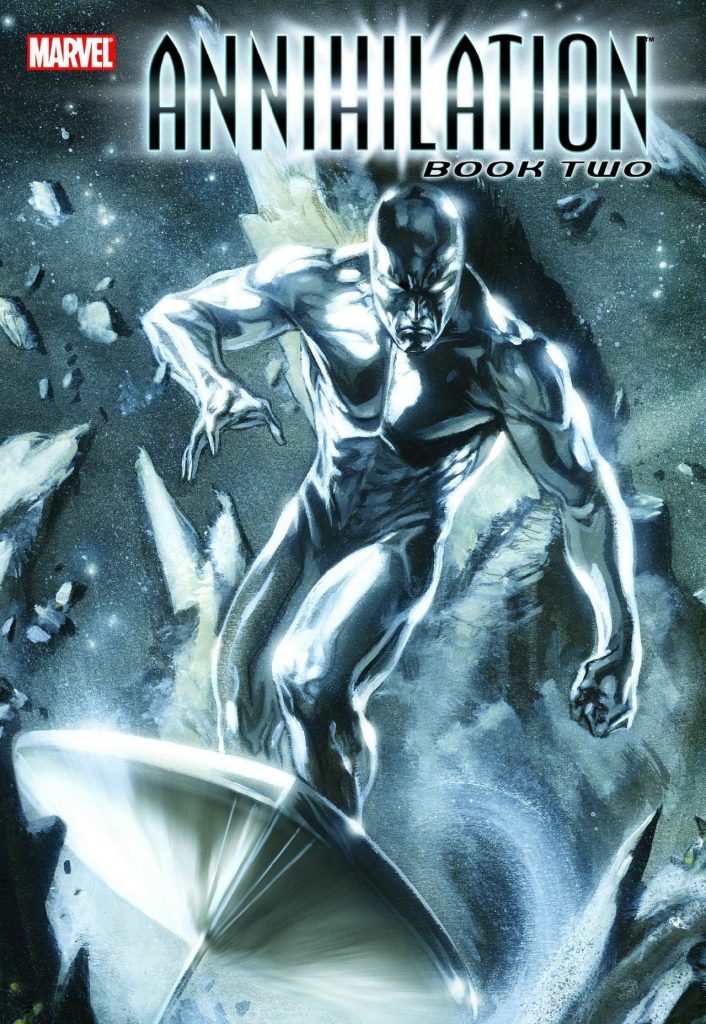 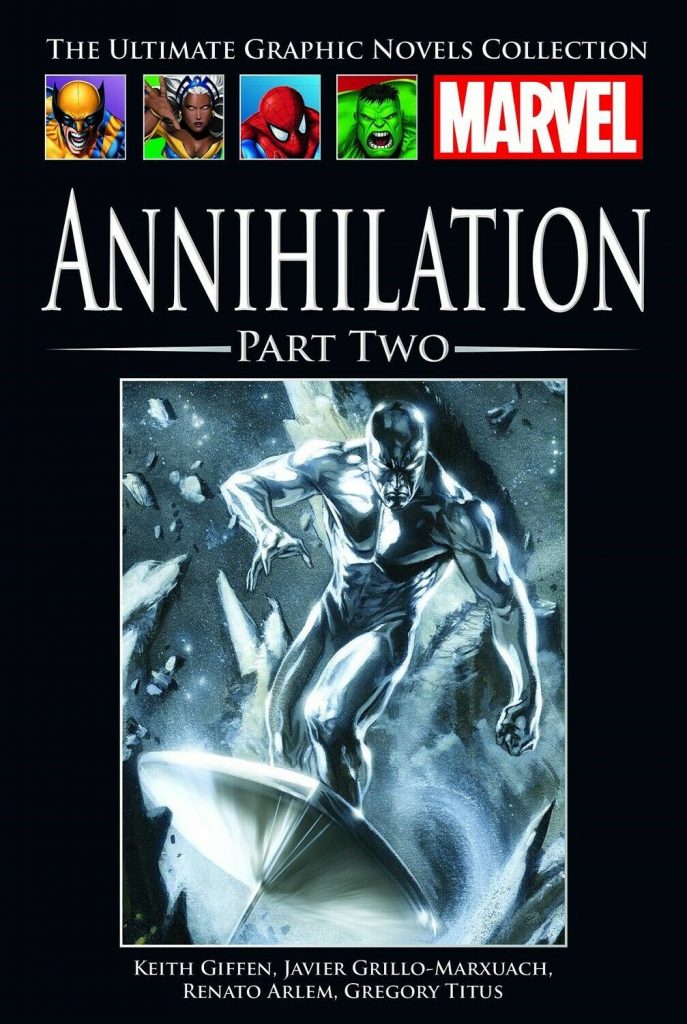 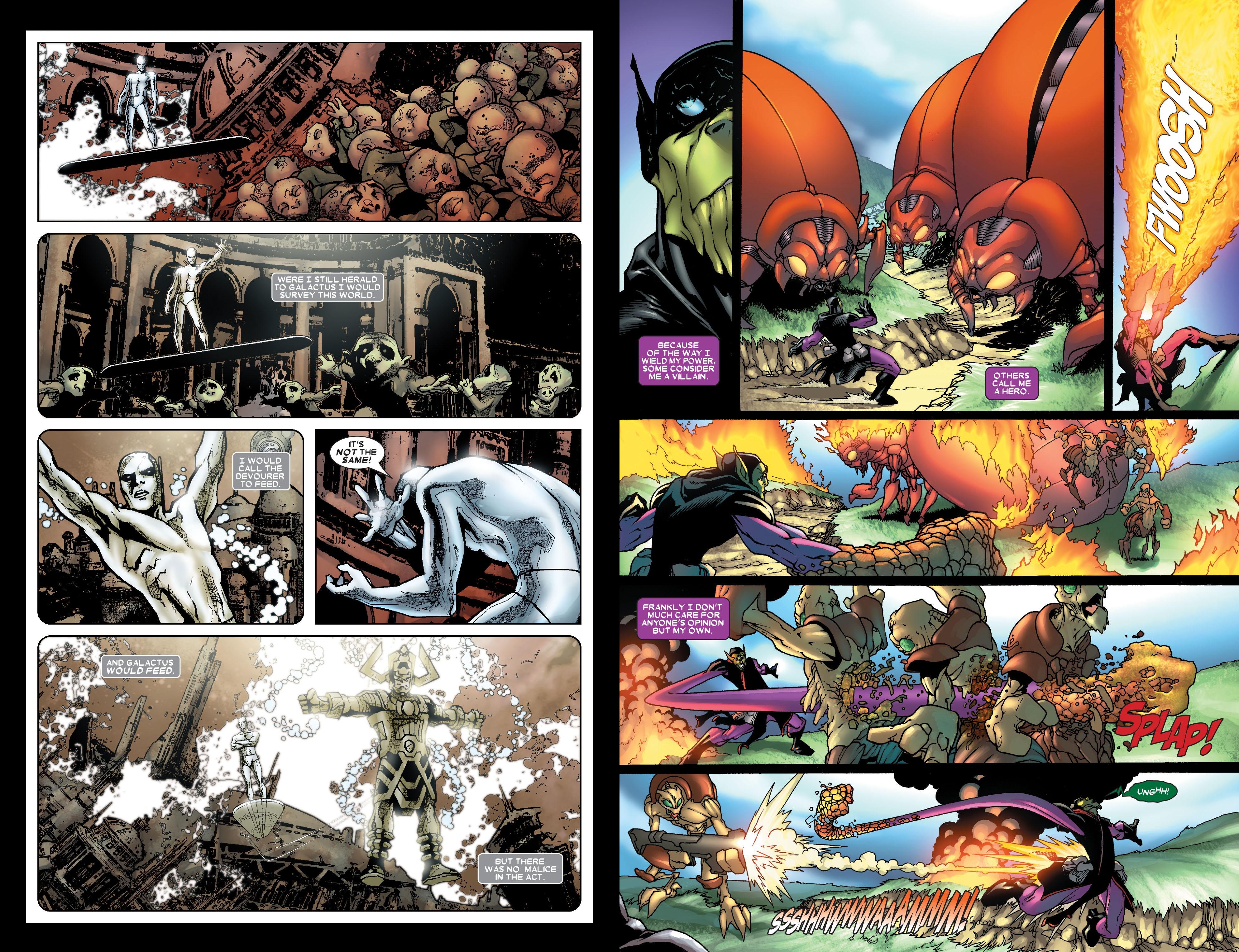 Ruler of the Negative Zone, Annihilus, has discovered a way of sending his forces through into the regular universe. These manifest as the space equivalent of a plague of locusts, with an uncountable number of ships moving from planet to planet wiping out all opposition. Book One introduced the idea, and showed the tragic consequences of the Annihilation Wave arriving at Xandar, home of space protectors the Nova Corps. This collection has three different creative teams handling stories of three other space-based characters, beginning with the Marvel’s most recognisable alien superhero, the Silver Surfer.

Keith Giffen is the creative mastermind behind Annihilation, although as here, other creators feed into the series. He starts with the stunning revelation that everything seen in Book One, was just a feint to lure out those who’ve served as heralds to Galactus. One purpose Annihilus has is to absorb energies he can manipulate with his Cosmic Control Rod, making him ever more powerful. Giffen involves Thanos, indeed the story has background elements from his Thanos series, reveals more about Annihilus, poses an interesting ethical question and drops a couple of surprises. Renato Arlem’s pages look grubby and cramped in places, but when he illustrates the Surfer cutting loose, a space armada or Galactus turning up, his imagination takes flight, and the results are great.

Kree dignitary Ronan has a complicated history, but none of that is required knowledge other than his own people no longer recognising his status, yet he continues touring the galaxy as a freelance arbitrator of law passing judgement, a cosmic Judge Dredd if you will. Oh, and that he’s made plenty of enemies along the way. He ends up making more. Much of Simon Furman’s plot has little to do with the bigger picture of Annihilation other than gathering more powerful entities together, and a more consistent artist would have improved it. Jorge Lucas has a strangely varied approach. At times he seems to be channelling Jack Kirby, other panels look slightly like Moebius, and others still are so packed with life and structure that it’s difficult to make out what’s going on. Some pages are extraordinarily slapdash or basic, and others items of wonder and beauty.

Gregory Titus drawing the Super Skrull, an alien with the combined powers of the Fantastic Four, is also problematical, great with detail, but bland with layouts, and the colours of Chris Sotomayor do much to make his work look vibrant. Of the three stories here, that by Javier Grillo-Marxuach ties in most directly to what we’ve seen in Book One, with the Super-Skrull tracking the Annihilation Wave and attempting to stop it. This is via a stopover in the Negative Zone, where he gathers a number of new allies. Much like the Ronan story, redemption is a theme, but Grillo-Marxuach infuses a greater element of hope, and manages to apply a heroic stature to the Super-Skrull amid dropping a great bombshell.

All stories start at a different point, but lead into Book Three, as the battle lines have pretty well been drawn. It’s only the Silver Surfer’s experiences, however, that move the greater plot forward significantly, so if you only want a sample of Annihilation it’s better heading straight to the main course where everything can be picked up easily enough. Alternatively there’s the oversized Annihilation Omnibus collecting the entire story, or this content being split over two still bulky Complete Collection paperbacks.