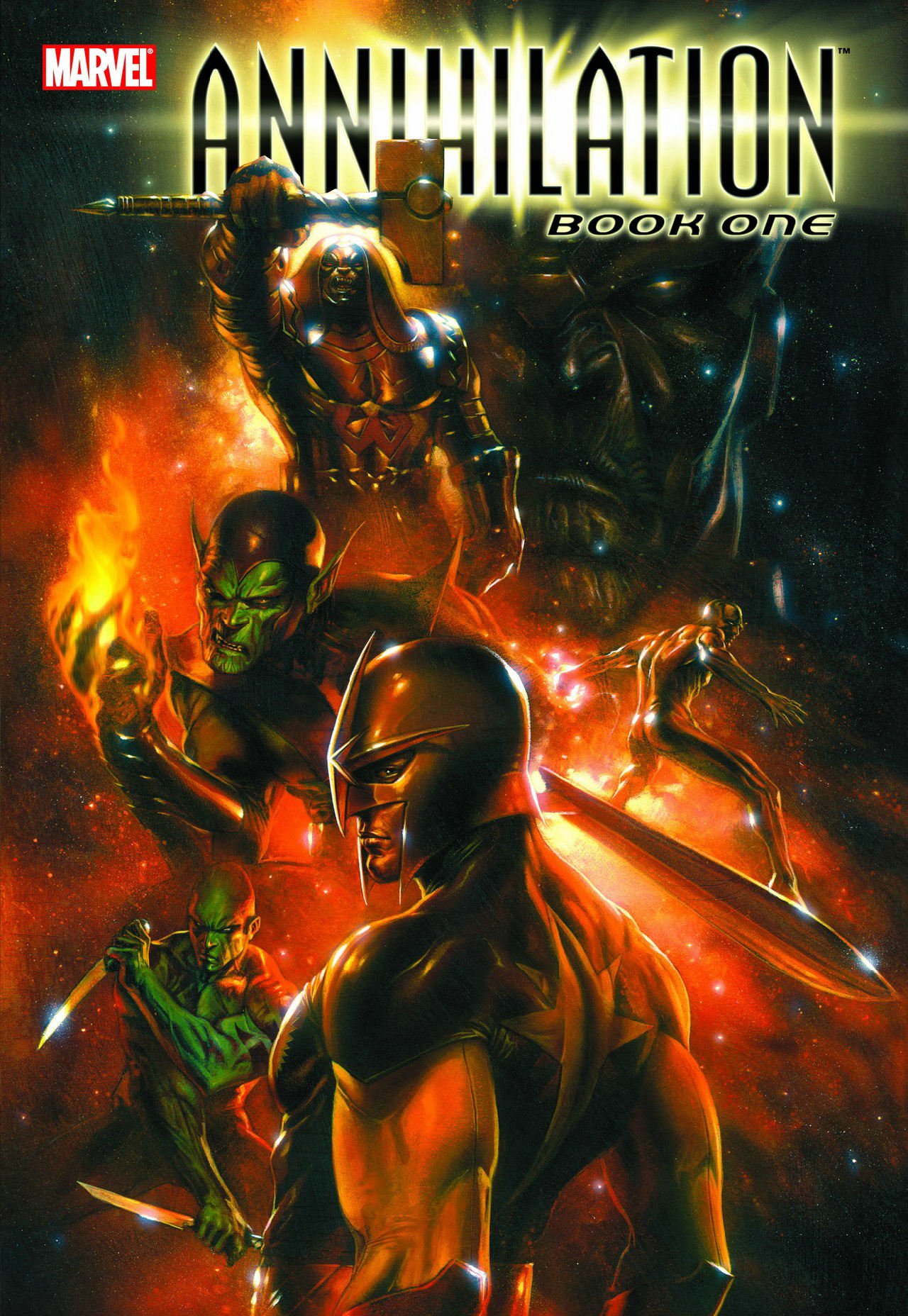 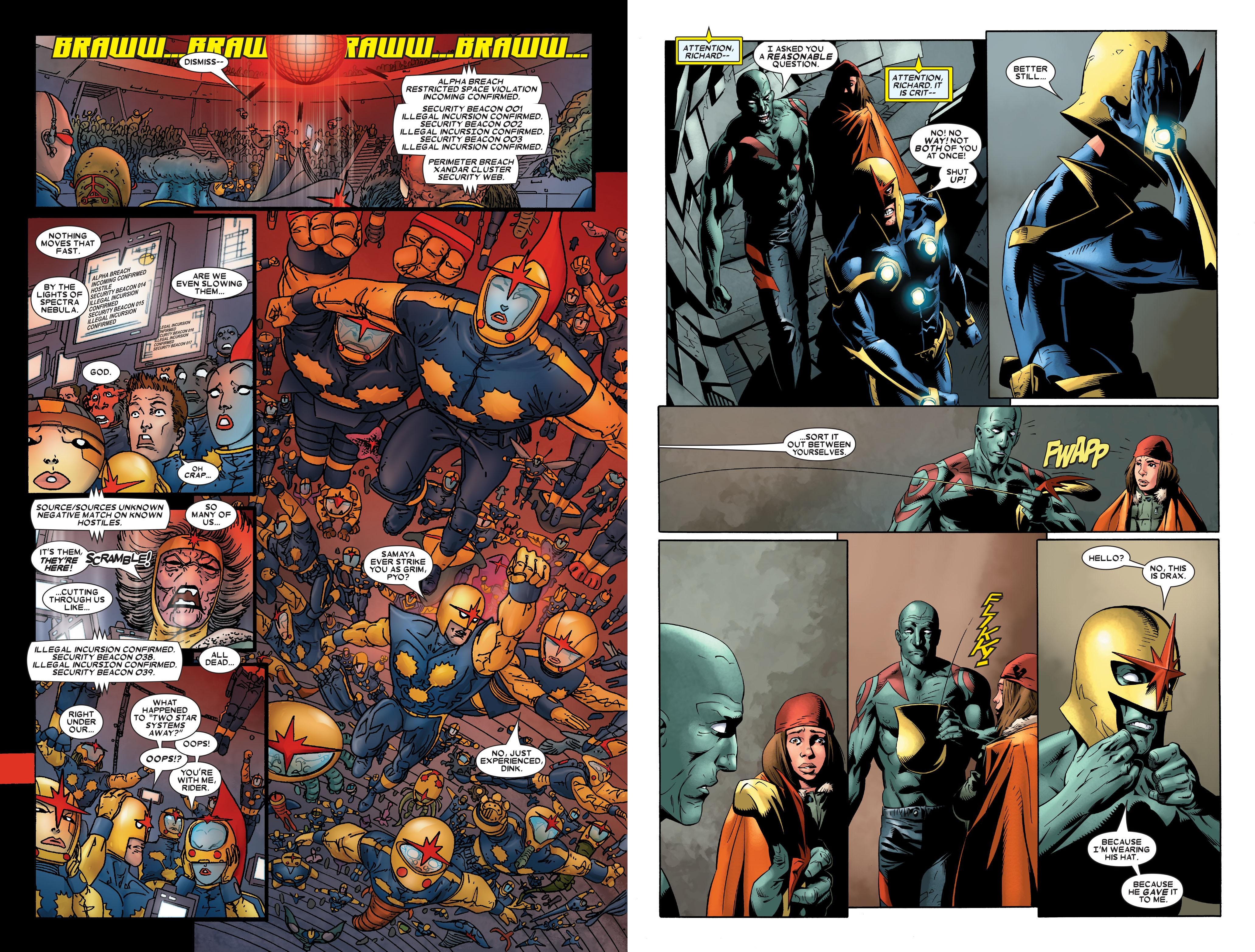 Annihilation is an ambitious story with Keith Giffen the prime motivator, involving almost all Marvel’s major characters based on planets other than Earth. This collection moves into events leisurely, starting by reprinting Drax the Destroyer: Earth Fall, in which Giffen reclaimed Drax from the moronic, almost dim Hulk-like character he’d become amid a generally entertaining story. Drax and a number of other aliens crash land in a remote area of Alaska where almost eleven year old Cammi sees Drax as a way of escaping an alcoholic mother and a boring life. Mitch Breitweiser’s art is notable, particularly the way he characterises Cammi.

They’re next seen out in space on Xandar, spectacularly drawn by Scott Kolins (sample art left) as the home of the Nova Corps comes under attack from the Annihilation Wave, strange mechanical insect craft sweeping through space like some kind of locust plague. It’s a brilliant idea, and Kolins produces page after page of ridiculously detailed art bringing it to life. It would have barely any visual impact with just a few craft seen in close-up, and Kolins surely damaged his vision for life adding the detail. As this is just the set-up for a series occupying three graphic novel trades, let’s just say it doesn’t end well for the Nova Corps and leave it at that. By the end of this section we’ve looked in on a few other planets and seen who’s behind everything.

The remainder of the book concentrates on Richard Rider, the human member of the galactic Nova Corps. His experiences are the work of Dan Abnett and Andy Lanning, who begin by increasing his power exponentially as he downloads what’s to all intents and purposes Xandar’s entire knowledge base and the digital intelligence that personifies it. The Worldmind has a defined mission, one that Rider doesn’t entirely see as his over-riding priority, and the writers work well with that as he blunders about uncertain, meeting Drax and Cammi. Of course, it helps greatly if there’s an artist of Kev Walker’s calibre to depict that blundering and its spectacular consequences. Except when it comes to the sheer volume of spacecraft, say evacuating a world, he doesn’t have Kolins’ diligence.

While the space adventure thrills as it should, and the reworking of Nova is an interesting idea, Abnett and Lanning either don’t realise Cammi is supposed to be ten years old or have no idea what even a ten year old is like. Even accepting she’s precocious, and her experiences on Earth have ensured she’s wise beyond her years, the smart-mouthed way she’s written in this section adds three or four years to her. Otherwise the bantering dialogue is amusing in the face of danger, and serves to define the cast. It was a revision successful enough to prompt a sequel, Nova: Annihilation Conquest, and lead into an ongoing series.

If preferred, the entire Annihilation story can be gorged in one oversized Omnibus edition, or split into two Complete Collection paperbacks, this content being in volume one. Book Two of this presentation continues with a look at how Ronan, the Silver Surfer and the Super-Skrull fare against the Annihilation Wave. 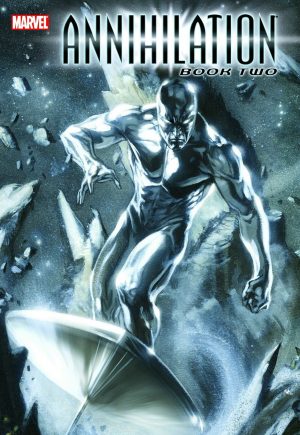 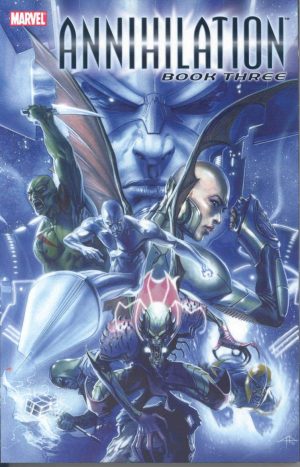 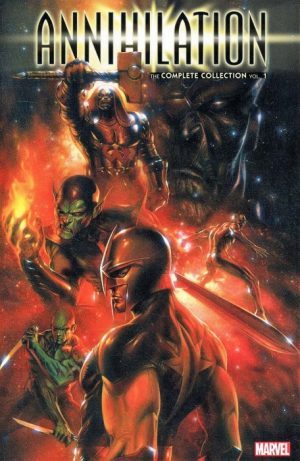 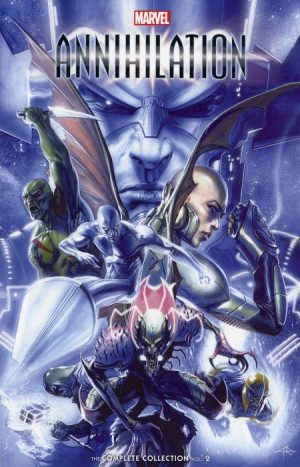