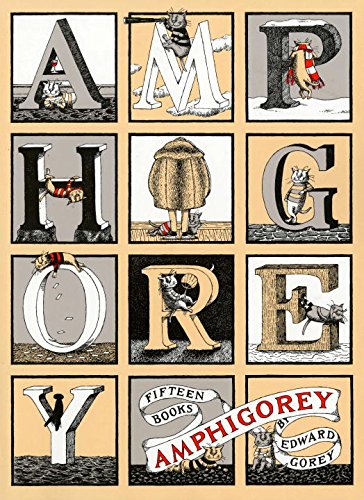 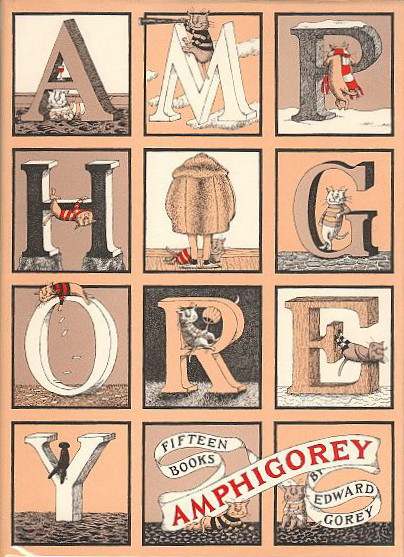 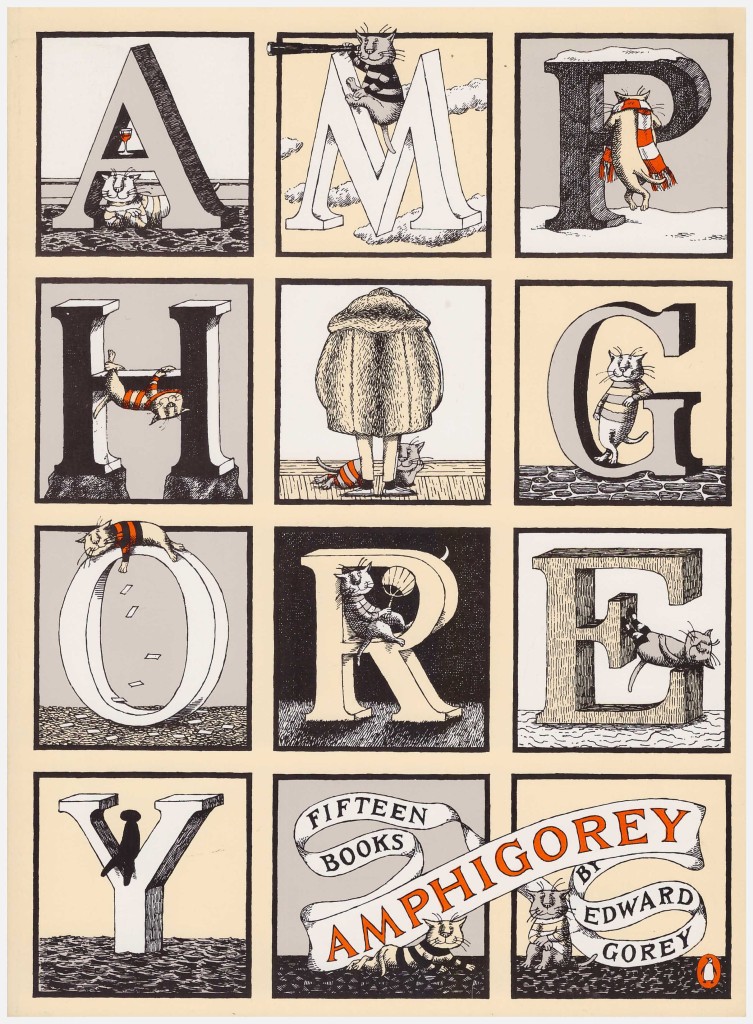 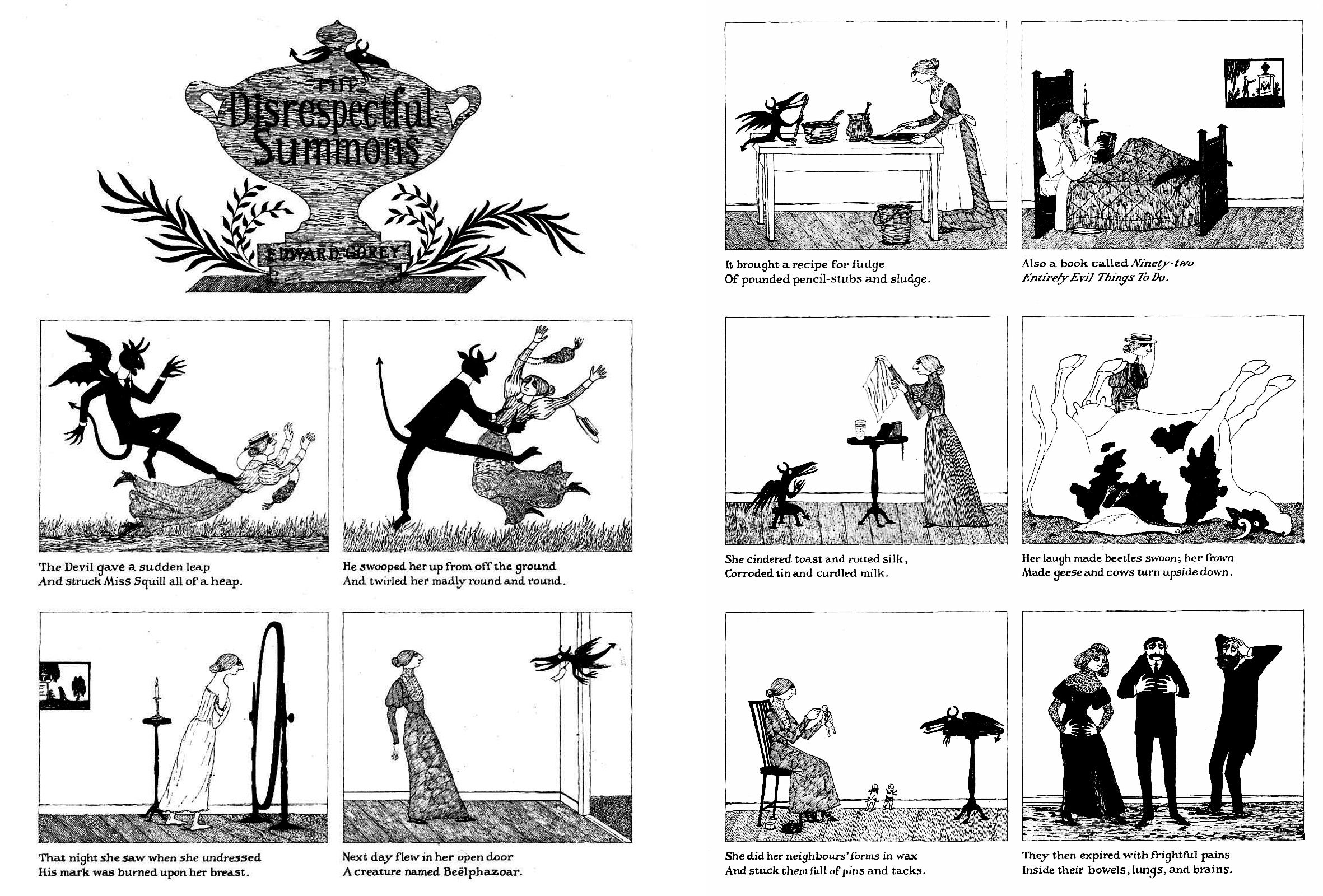 Edward Gorey (1925-2000) is the author of over one hundred books, including The Gashlycrumb Tinies, The Doubtful Guest and The Unstrung Harp. He designed sets and costumes for Broadway theatre productions (some based on his own books) and illustrated for publications such as the New Yorker and the New York Times. His intricately drawn and subtly horror-tinged stories were massively influential.

Amphigorey, a collection of fifteen of Gorey’s best-known books, allows new readers to discover his work relatively inexpensively. These fifteen titles, published between 1953 and 1965, feature stories told in cross-hatched pictures and (mostly) rhyming couplets, generously spaced in a small hardcover book. In this collection the panels of these books are rearranged to fill both sides of a much larger spread, which gives the stories a slightly different feel.

The Unstrung Harp, or, Mr Earbrass Writes a Novel, is the tale of a writer struggling to complete a manuscript. It is one of Gorey’s most popular works. The Listing Attic is a collection of limericks: “A certain young man, it was noted, / Went about in the heat thickly coated; / He said, ‘You may scoff, / But I shan’t take it off; / Underneath I am horribly bloated.’” The Doubtful Guest concerns a creature in striped scarf and tennis shoes who one day moves into the house of a reluctant Edwardian family. “At times it would tear out whole chapters from books / Or put roomfuls of pictures askew on their hooks.” The Object-Lesson features mysterious illustrations, each with an equally mysterious line of text. The Bug Book is in colour, a child-friendly tale of a group of insects who have to deal with a bully. The Fatal Lozenge is an alphabet narrative with each letter from Apparition to Zouave discussed in a 4-line verse. The Hapless Child relates a tiny orphan’s short and catastrophic life.

The Curious Sofa is described as ‘a pornographic tale’, with delicately vague, overwrought language hinting at unorthodox desires, “Still later Gerald did a terrible thing to Elsie with a saucepan.” The Willowdale Handcar involves three young people who rashly decide to go off on a trip which turns into an ordeal. The Gashlycrumb Tinies is probably Gorey’s best-loved work, an alphabet of 26 children who each die in unlikely and horrible ways, trampled by drunks, mangled by trains or eaten by mice. The Insect God is a cautionary tale of what happens to a little girl who takes sweets offered her by a stranger. The West Wing is a wordless narrative. Each of the thirty images shows a part of a building with a disquieting detail – a ghostly face at a window; the shadow of a floating woman on a wall.

The Wuggly Ump is another child-friendly tale in colour. Three good little children are menaced by an unwholesome beast. The Sinking Spell concerns another hapless family,  thrown into disarray by an unseen creature. The final story, The Remembered Visit is the quietly haunting recollections of a little girl taken to spend a few hours with an elderly gentleman, featuring topiary, bare ankles and a broken promise.

Gorey’s books are short, which might encourage you to skip quickly through this volume, but slow down and spend some time with each story. The power of the images grow and meanings multiply when you look closely. If you find you particularly respond to one of the stories here, then you can track down individual books relatively easily. This collection is the singular work of an absolute master of words and pictures, and there are three further large collections, Amphigorey Too, Amphigorey Also, and Amphigorey Again.