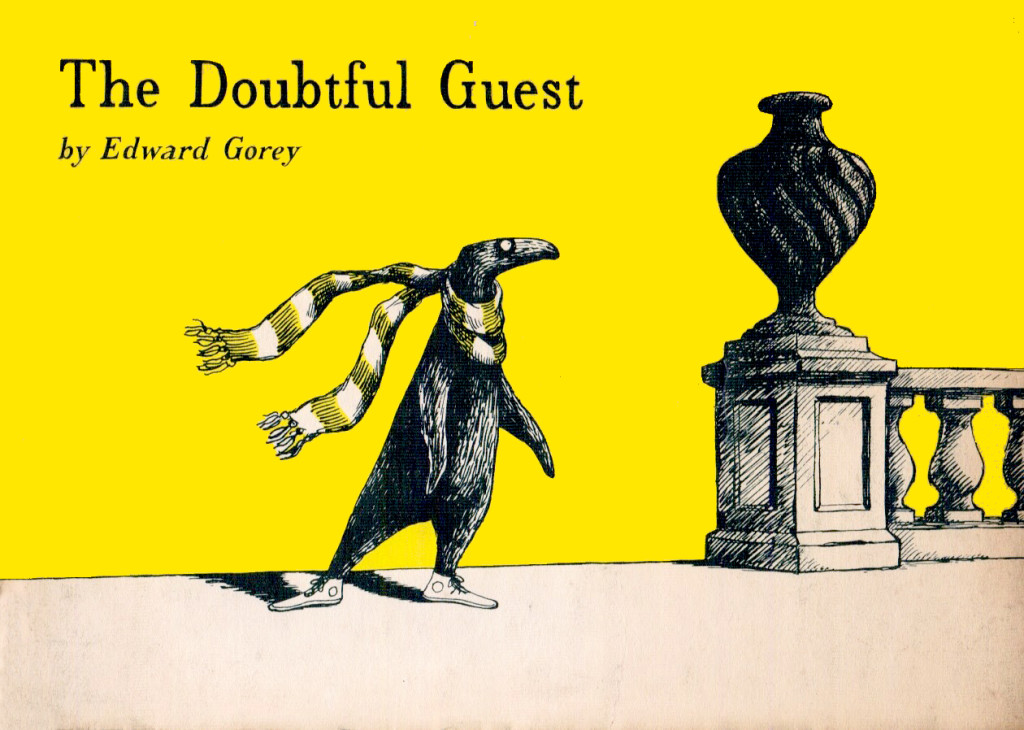 Edward Gorey (1925-2000) was a highly regarded and influential author because of the originality and potency of his illustrated fiction in books such as The Gashlycrumb Tinies, and The Unstrung Harp. Many of the attributes of Goth subcultures–the black clothing, the Victoriana, pallor and sunken eyes, the bats, graves, skulls and mordant humour–can be traced directly back to Gorey and his contemporary, Charles Addams. He was also a very successful set and costume designer, with Tony Awards for his theatre work including his Broadway production of Edward Gorey’s Dracula. His distinctive drawings have animated the titles for the Mystery! television series shown in the USA on PBS since 1980.

The Doubtful Guest is one of Gorey’s most loved works, originally published in 1957. This slim, bright yellow hardcover introduces a solemn, staring creature something like a hairy giant penguin crossed with an anteater, wearing a long scarf and –here, the true genius at work– Chuck Taylor high-tops. It rings the doorbell of an Edwardian family’s home one winter night, invites itself in and then doesn’t leave. Gorey’s beautifully delicate drawings are restrained and yet ridiculous at the same time as they show the bewildered and annoyed members of the house not quite sure what to do about this weird intruder. Ignore it, try to placate it, nothing seems to work. The creature behaves as oddly as it looks, in one scenario after another: “It wrenched off the horn from the new gramophone, / And could not be persuaded to leave it alone.” and there just doesn’t seem to be anything its reluctant hosts can do about it. The combination of deadpan pictures accompanied by fourteen rhyming couplets is very funny, and the effect of this small, eccentric little tale is so much more powerful than its length would indicate. It’s a classic work by a true original.

The Doubtful Guest has been reprinted countless times in different editions. It is also available in a slightly different form, collected along with fourteen other books by Edward Gorey in an anthology called Amphigorey.