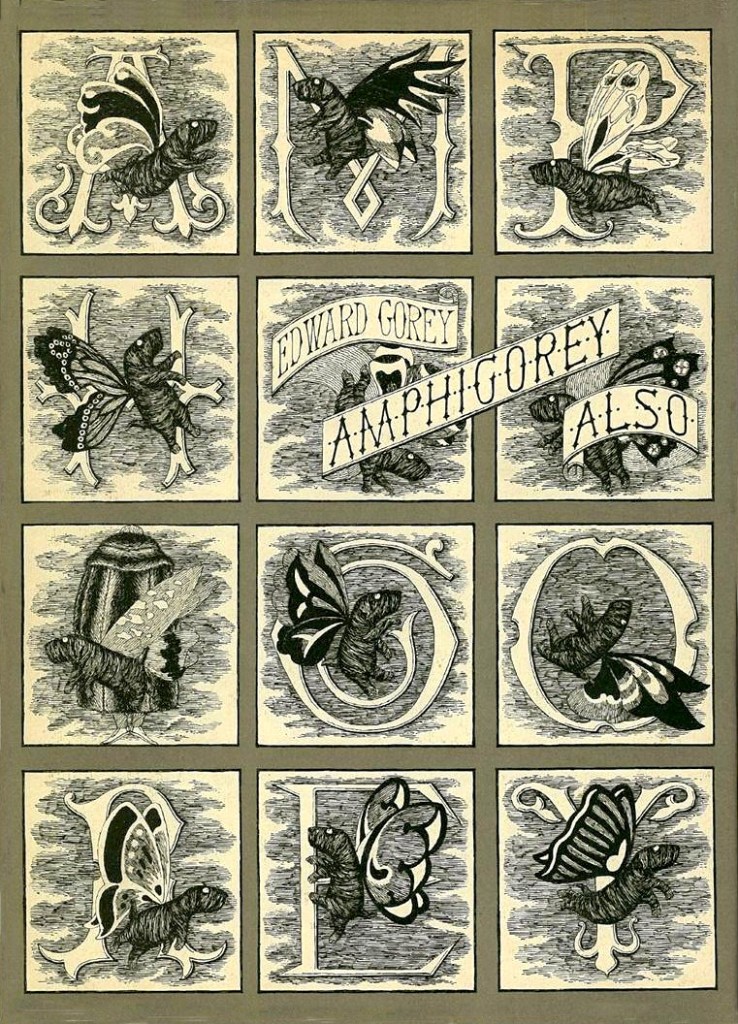 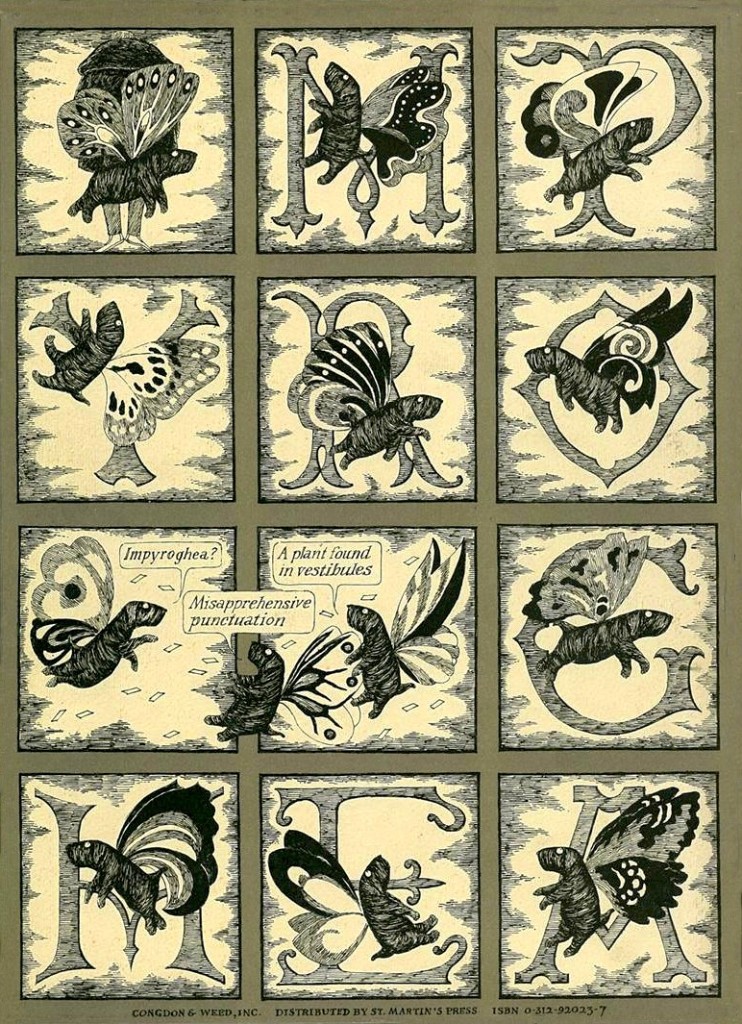 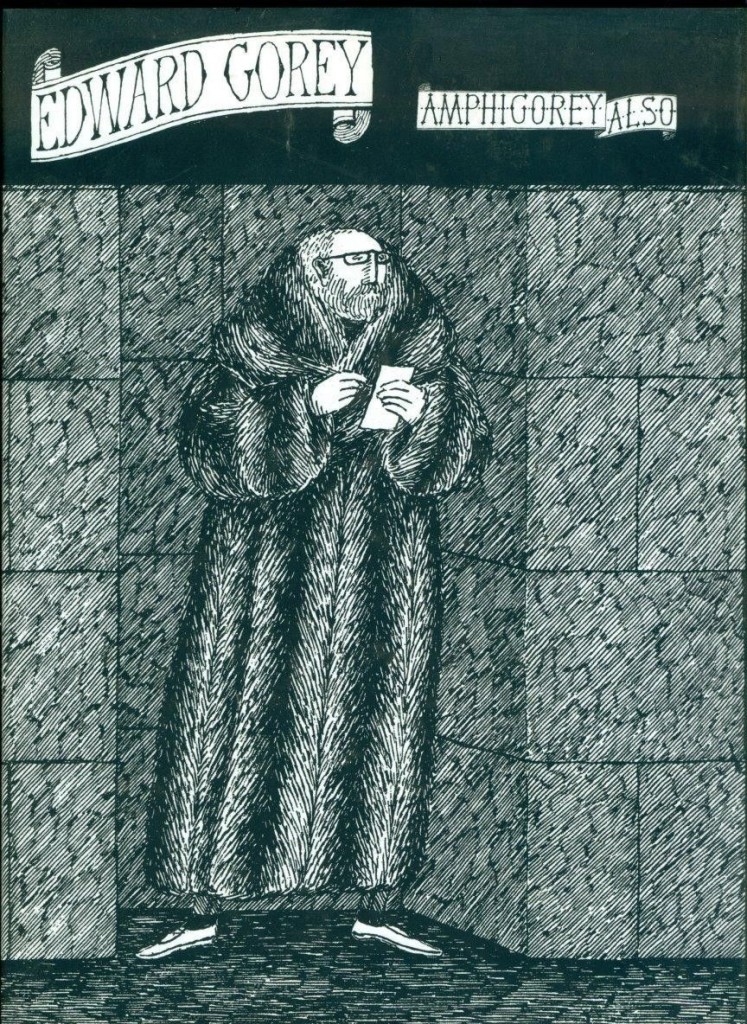 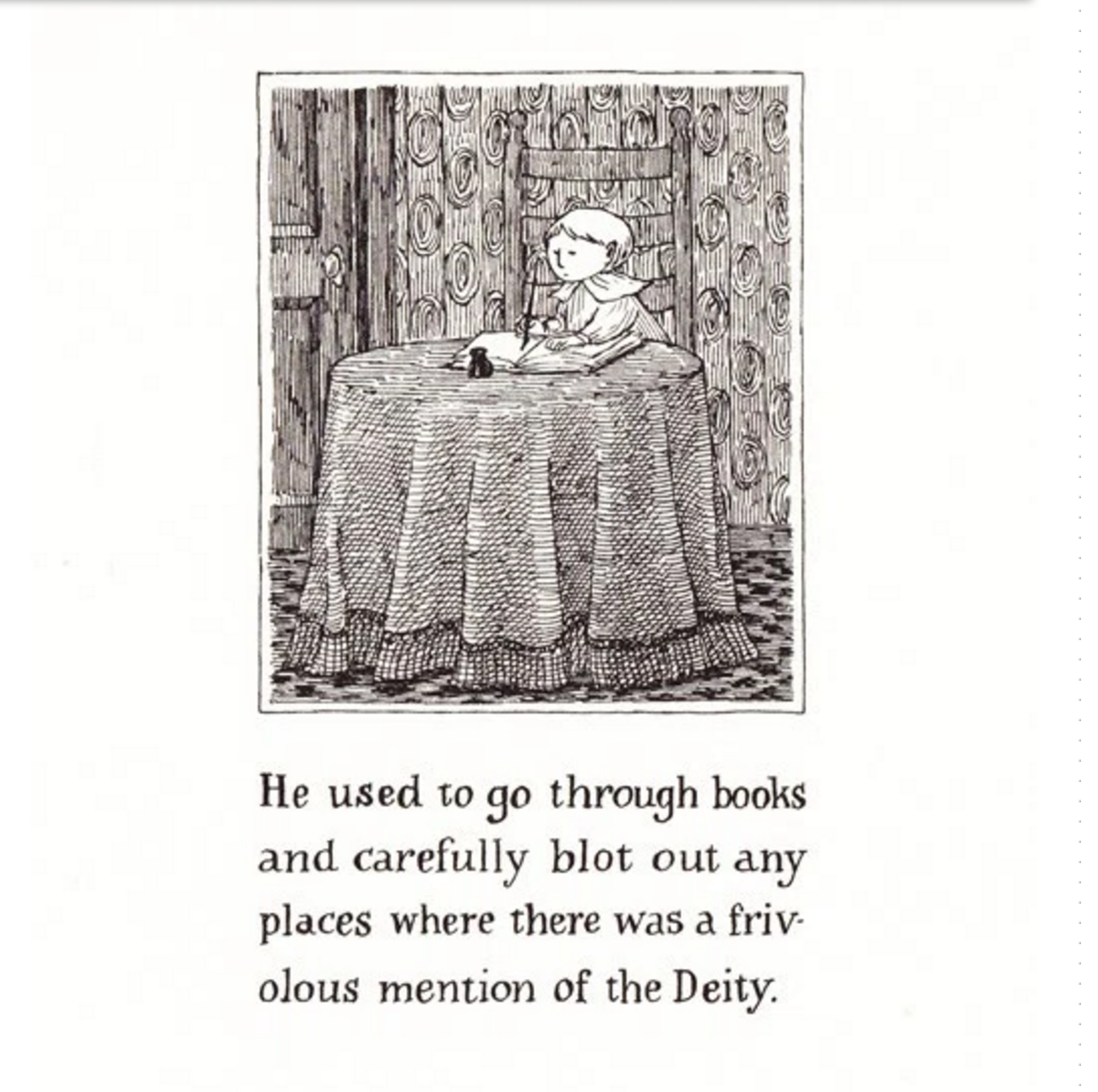 Amphigorey Also is the third volume of collected works by Edward Gorey, featuring seventeen tightly focused, darkly humorous pieces. They aren’t in any thematic or chronological sequence but the tone of Gorey’s work was so consistent over almost forty years of creativity that this volume feels excellently curated. The contents of these very small books are rearranged to fit the much bigger pages of this collection but are otherwise unaltered.

The Utter Zoo is an alphabet of creatures from A for Ampoo to Z for Zote. The Blue Aspic is about Jasper Ankle, an opera fan obsessed with a diva named Ortenzia Caviglia, famed for her peformances in ‘Lizzia Bordena’, ‘La Reine des Iguanes’, and ‘La Vengence Posthume’. The Epiplectic Bicycle has a purpose all its own, as siblings Embley and Yewbert eventually discover. The Sopping Thursday features rain, nervous cats, brave Bruno the dog and an apparently happy ending. The Grand Passion (A novel) is “Englished anonymously from the Conton dialect”. Les Passementeries Horribles are sinister embroidered tassels and braids which are giant-sized. The Eclectic Abecedarium is an alphabet of advice and some observations: “Don’t try to cram the Dog with Jam.” … “Forbear to taste Library Paste.” L’heure Bleue presents two dogs, who both have the letter “T” embroidered on their sweaters, waxing philosophical. The Broken Spoke is a collection of images related to cycling.

The Awdrey Gore Legacy features a metafictional murder mystery which must be solved by detective Waredo Dyrge. Both title and detective are anagrams of Edward Gorey. Others he uses elsewhere include Dogear Wryde, Ogdred Weary, Raddory Gewe, G.E. Deadworry, Deary Rewdgo and Regera Dowdy (Mrs). Playing with language and exploiting the ambiguities and double meanings of words is at the core of Gorey’s work – even the title of these collections is a play on the word ‘amphigory’, a nonsense verse or composition.

The Glorious Nosebleed is an alphabet of adverbs: “He fell off the pier Inadvertently.” … “He exposed himself Lewdly.” The individual images have been frequently reprinted as postcards and calendars. The Loathsome Couple are Harold Snedleigh and Mona Gritch. They murder children together until they are caught and punished. Unusually for Gorey this piece was directly inspired by the Moors Murders, and the blurb for the original edition noted “This book may well prove to be its author’s most unpleasant ever.” The Green Beads concerns little Tancred’s fateful meeting with the Baroness von Rettig. Les Urnes Utiles are massive jars, with overwrought names. The Stupid Joke begins and ends with a bed. The Prune People are precisely that. The Tuning Fork is mostly set underwater, about an unhappy woman who is dissuaded from ending it all. Unlike the other selections in this book it is not a reprint, but was first published in Amphigorey Also in 1983.

Amphigorey Also is an enthralling collection, as brilliant as Amphigorey and Amphigorey Too. Many of the books reprinted here are expensive or hard to find, so this is a treasure trove for those interested in the work of this singular man. There is one more, posthumous collection of books and drawings by Edward Gorey: Amphigorey Again.