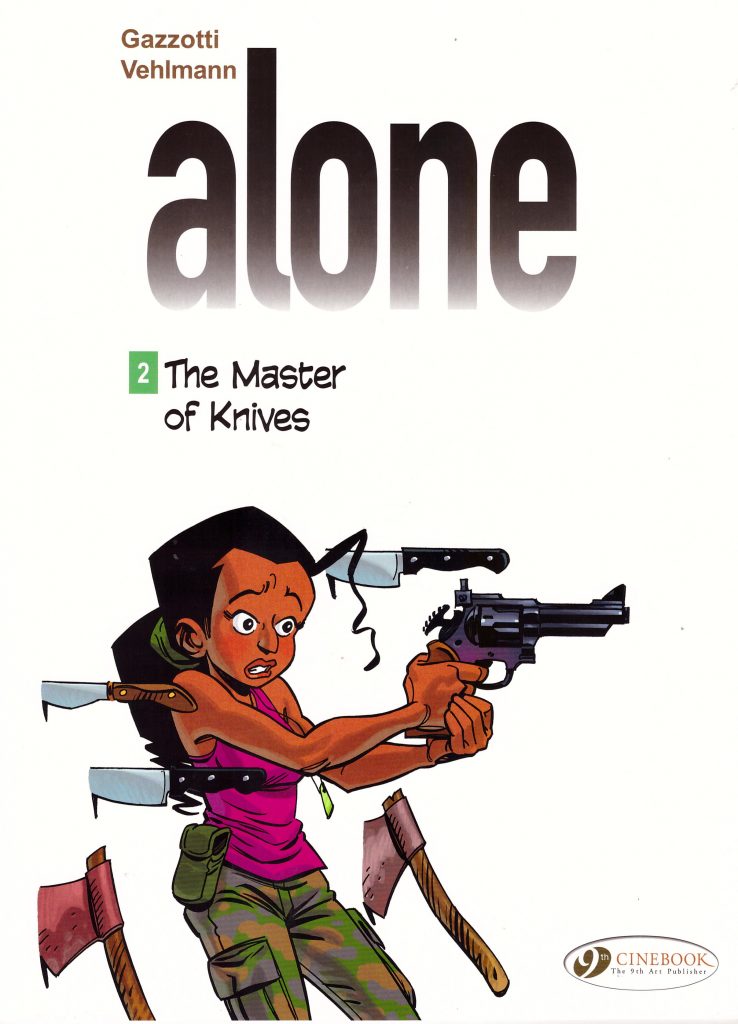 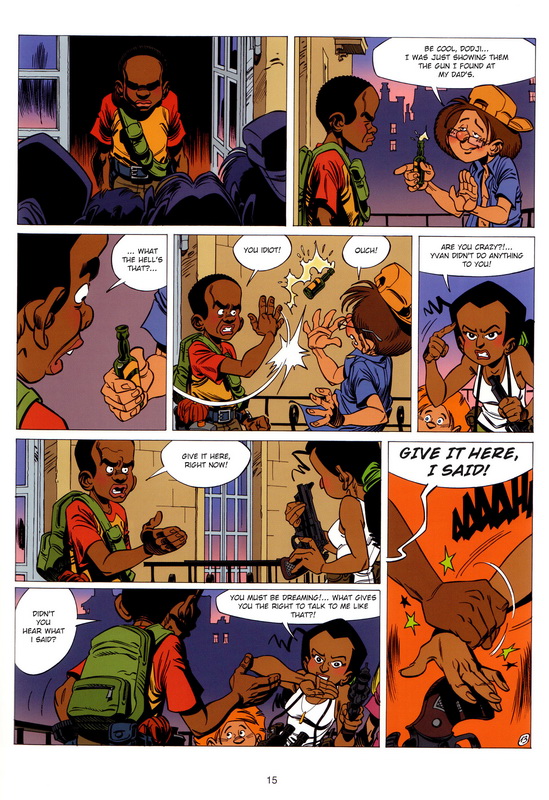 How would young people cope in a world where everyone else has vanished? That’s the premise of Alone, introduced very successfully by Fabien Vehlmann and Bruno Gazzotti in The Vanishing. Dodzi, Ivan and Leila are all in their early to mid-teens, Camille is younger and Terry is far younger, still prone to childish tantrums and not fully understanding the world around him. The care taken to differentiate the cast and to ensure they have a complementary skill set was one of the joys of the opening volume. The Master of Knives is still very good, but due to the title character lacking some credibility it doesn’t match The Vanishing. Every other aspect is equally good.

With wild animals roaming the city streets and Ivan’s father’s office block less than ideal accommodation, the group settle into a luxurious hotel, and the thought Vehlmann applies to the cast is again apparent. Each occupies a floor of the hotel, and Camille keeps a pony. As seen on the sample page, Terry’s been busy looting the city’s toy shops. Dodzi, established as largely keeping himself to himself is again central to events, the first to encounter the story’s menace, striking out alone after a disagreement over Ivan’s increasingly dissolute behaviour. With all restrictions vanished, Ivan is becoming a more interesting character, a development continued in later books, while Leila’s diplomatic skills are furthered.

An obvious question unanswered in The Vanishing was whether anyone else remains in the city. They do, and they’re dangerous. Vehlmann gives a background and reasoning for their character, but it’s weak, even with the surprising conclusion. That different threats are required to keep interest up goes without saying, but this shifts the cast into an all-ages version of the stalk and slash movie, which while certainly viable, seems a retrograde step that messes with the tone. As the priority remains character driven drama there’s more than enough to ensure The Master of Knives still has considerable merit.

Gazzotti is an equal partner, and the cartooning is superb, detailed and expressive. His illustrations of Terry’s changing moods are wonderful, oozing joyous charm. There’s a scene where he wakes a hungover Ivan to show off his brilliant new solution for coping with the washing up. It consists of filling the warmed swimming pool with detergent. This is a great idea, but the script calls for an instant change of mood with Ivan having a greater understanding, and Gazzotti characterises the entire sequence so well, with Terry exuberant and Ivan understated. He also brings the varied locations to life from hotel luxury to rooftop danger.

At this stage the least developed character is Camille, although there are some very nice touches. She’s torn between the new freedoms on offer and an adherence to the values she was raised with, still keeping up with her studies, for instance, and bellowing “I only borrowed it! I’m not a thief!” when asked about the distinctive dress she’s wearing.

Alone is excellent, indeed award winning, material, and continues with The Clan of the Shark.