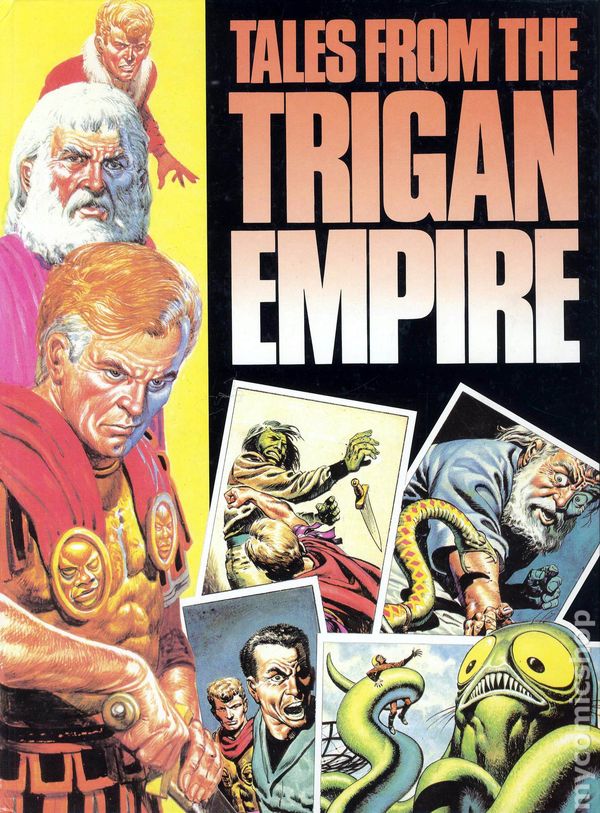 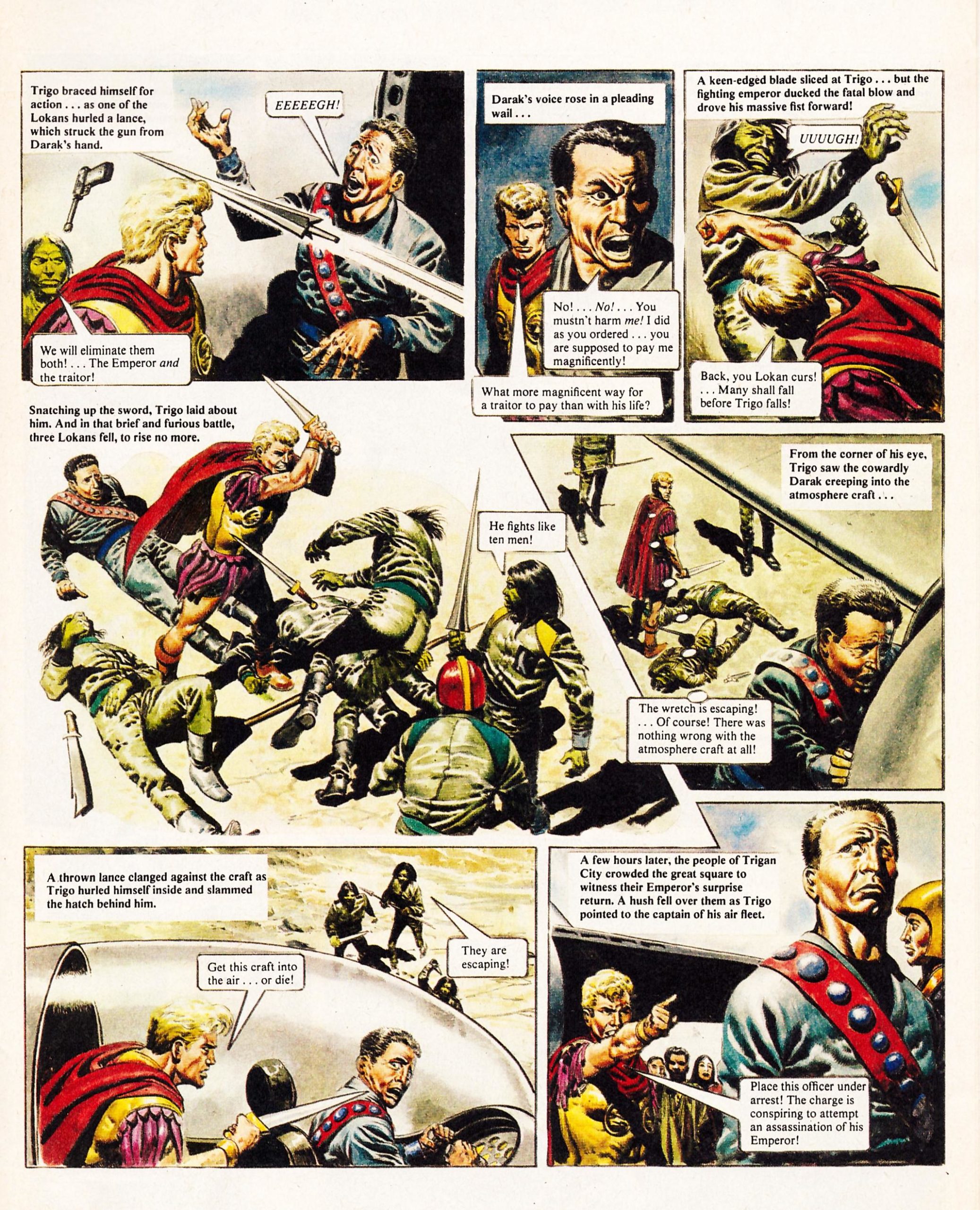 For many years this 1989 collection stood as the best of three sporadically issued books gathering stories from the 1960s adventure series The Trigan Empire. Two 1970s collections had started with the opening stories, but Hawk Books opted for a selection picking up two years into the run, providing 158 lushly reproduced pages of Don Lawrence’s artwork in an oversized hardcover. However, what’s been revealed by later reprintings is that for some reason stories were cut and pages were modified, instances of Lawrence’s art blown up to a size never intended and looking scrappy. This is only on a few occasions, but that’s still too many.

Writer Mike Butterworth set The Trigan Empire on the planet Elekton, a hodge-podge civilisation with the clothing and trappings of Earth’s Roman Empire, yet an advanced society that travelled from land to land in aircraft. They chose to fight largely with swords, but other, more advanced weapons were available, much needed when monsters appeared, and many lands had fallen to their intelligence and technology. Although the British Empire was all-but defunct as Butterworth began writing the feature in 1965, propaganda had ensured the idea of an empire remained a matter of pride, not one of guilt about subjugation, and that spirit was transferred to the strip. We’re meant to see the followers of Emperor Trigo as men of honour, and those fermenting rebellion against them are instantly characterised as villains. It’s best to accept the adventure for what it is without delving too far into the politics.

That adventure is brought to stunning figurative life over seven stories by Lawrence, a talent equal to any who’ve worked in British comics, and who’d be among the earliest British artists to transfer their talent to overseas publishers. He produced two serialised pages a week, each of them action-packed and detailed, rich with life and vibrant, imaginative scenes. With the exception of Janno being a younger version of Emperor Trigo, Lawrence made a point of ensuring all his characters look different

Machiavelli’s The Prince has it that it’s easier to acquire an empire than to maintain it, and Emperor Trigo and allies are constantly under threat. Butterworth varies these inventively, the first three stories all having the Trigans undermined and deposed in some form, each cleverly conceived and plausible. Butterworth’s two page allowance regularly finishes with a viable cliffhanger, yet he’s not short of ideas for the remainder, and the intervening pages move events at a pace dictated by the limited page count. An indication of the stories being produced during the 1960s is not much thought being applied to characterisation, which is never more than heroic or villainous as the story needs, and apart from usurper Queen Tharia in a single story, there’s barely a line of dialogue for any woman. Despite that, the adventure is pager-turning and the art first rate.

These stories are now available in luxurious hardcover volumes as The Reign of Thara and The Three Princes, or alternatively the final pieces in The Rise and Fall of the Trigan Empire Volume 1, along with the opening strips of Volume 2. Considering how this content has been modified, they’re all better bets, particularly as this collection is all-but absent from Amazon listings.