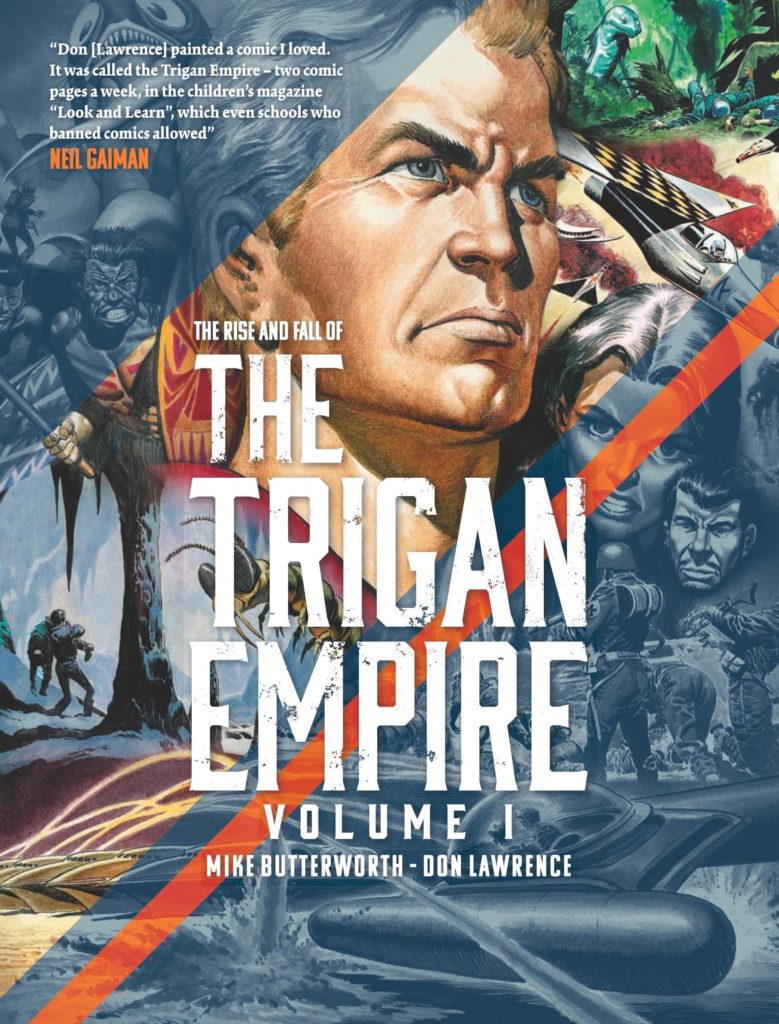 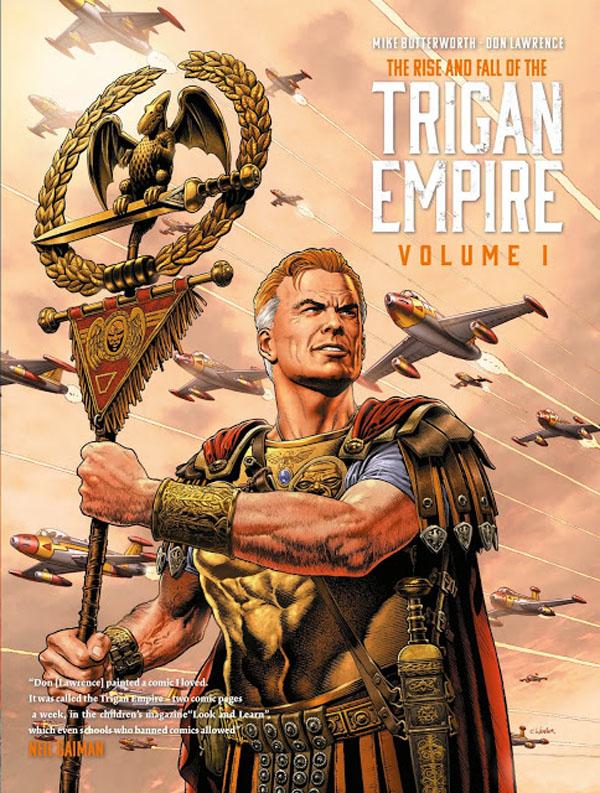 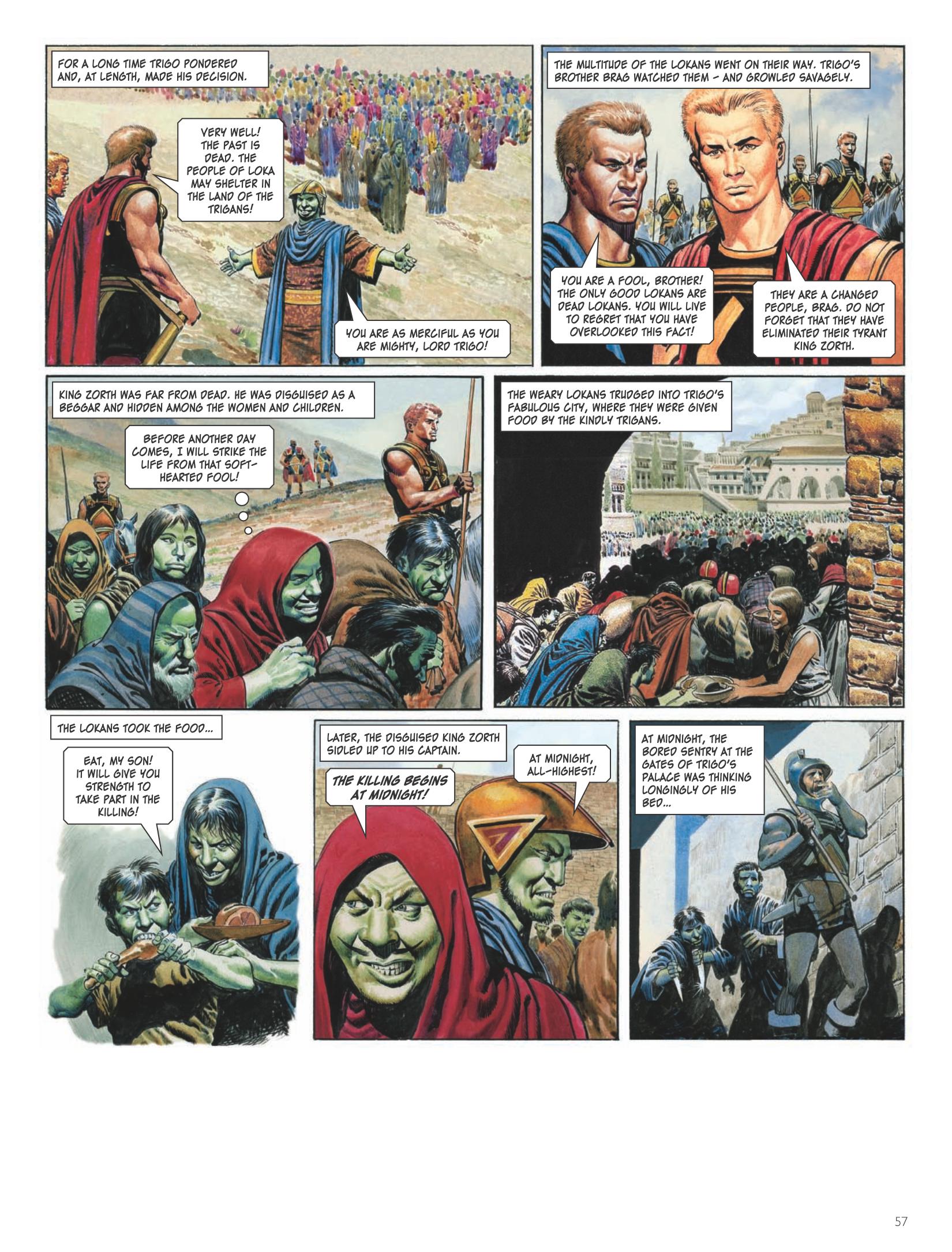 Over fifty years since it first thrilled a generation of readers, Rebellion have published the Holy Grail of British comics via this affordable presentation of Don Lawrence’s work on a legendary series only once before completely collected in English. That was in a dozen beautifully presented oversize hardcovers retailing at £700 for the set. In terms of comparison this collection may be smaller sized, but covers the first three hardbacks, beginning with The Invaders From Gallas, or £175. Ridiculously, affordable reprints of The Trigan Empire have been available in Europe for decades.

Looking at any page shows why Trigan Empire is so highly regarded. Don Lawrence created lush beauty, classic figurative art painted in ink according to Liam Sharp’s introduction, never failing to produce fully realised scenes with a cinematic sweep. It’s Lawrence’s efforts that stick so fondly in the memory, as he cements the visual imagery of Mike Butterworth’s stories pulling influences from far and wide. The most obvious are the costumes, architecture and weapons from the classical Roman era, but as more societies are introduced on the planet of Elekton, more influences come into play. Lawrence gives these the intended nobility or threat, the Lokans a scientifically advanced race with aircraft and armour representing that, designed by Lawrence to be smooth and futuristic. Once they’ve been established the series begins to introduce the anomalies, the monsters, the prehistoric creatures. There is some fudging. A horse is a horse despite being coloured blue and given a different name, but Lawrence puts so much work into these pages that a few shortcuts shouldn’t be criticised. The sample page may not be one of his most spectacular, but it illustrates Lawrence’s effort, the crowd of a convincing size and every face distinct.

The opening story concerns Trigo pulling his nomadic people together, transforming their wandering nature into city dwellers and founding the magnificent city of Trigan. This threatens neighbouring lands, and a continuing hallmark of The Trigan Empire is how Trigo is overthrown for short periods and has to regain control of his city. He’s a very active ruler, brave, bold and not afraid to get his hands dirty, and the same applies to his brother Brag, and his nephew Janno, who meets his long term friend Keren in the second story. Butterworth is creative in undermining Trigo, having him deposed by the Lokans, transformed into a tyrant and having his memory wiped, and his storytelling is refreshing. Because The Trigan Empire was serialised two pages at a time, events that would occupy dozens of pages in other strips are glossed over in a single panel, such as Trigo’s marriage, and they lead to interesting, if sometimes abrupt endings to individual stories. The downside is Butterworth’s occasional recourse to illogical means of prompting a plot, one being a war caused by a rogue’s insistence on the application of an ancient tit for tat law, but as a collection this remains first rate.

Some attitudes are very much of the era, female roles being negligible and the men’s personalities interchangeably one-dimensional, but the imagination, adventure and phenomenal world building still resonate. And, oh, that art. Volume II followed at the end of 2020.

Around two-thirds of this material was reprinted in Hamlyn’s 1979 Trigan Empire hardcover, but that reproduction was overexposed when photographed from comic pages, so don’t be tempted by cheap copies. That said, there has been tinkering with the colour for this edition, but it’s sensitive, not anything you’d know without it being pointed out. This also comes as a very limited hardback edition as per the alternate cover. 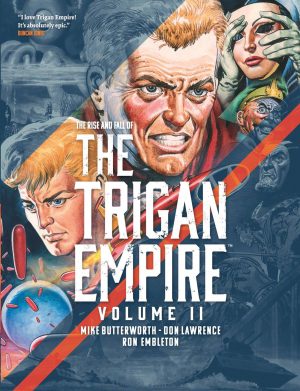 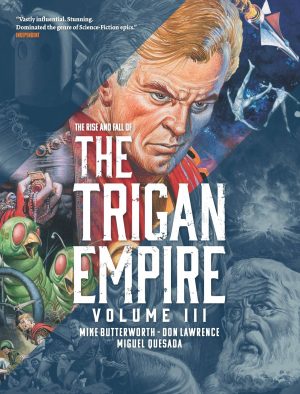 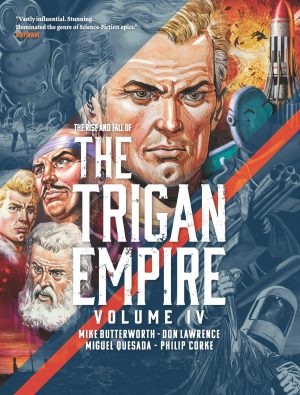