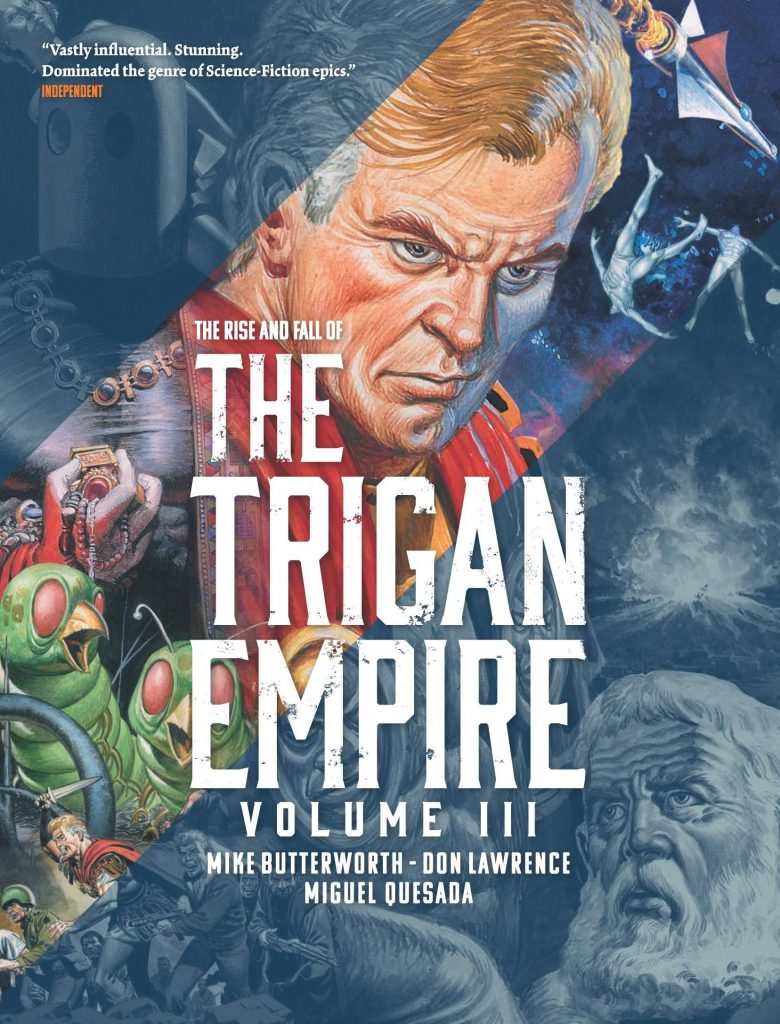 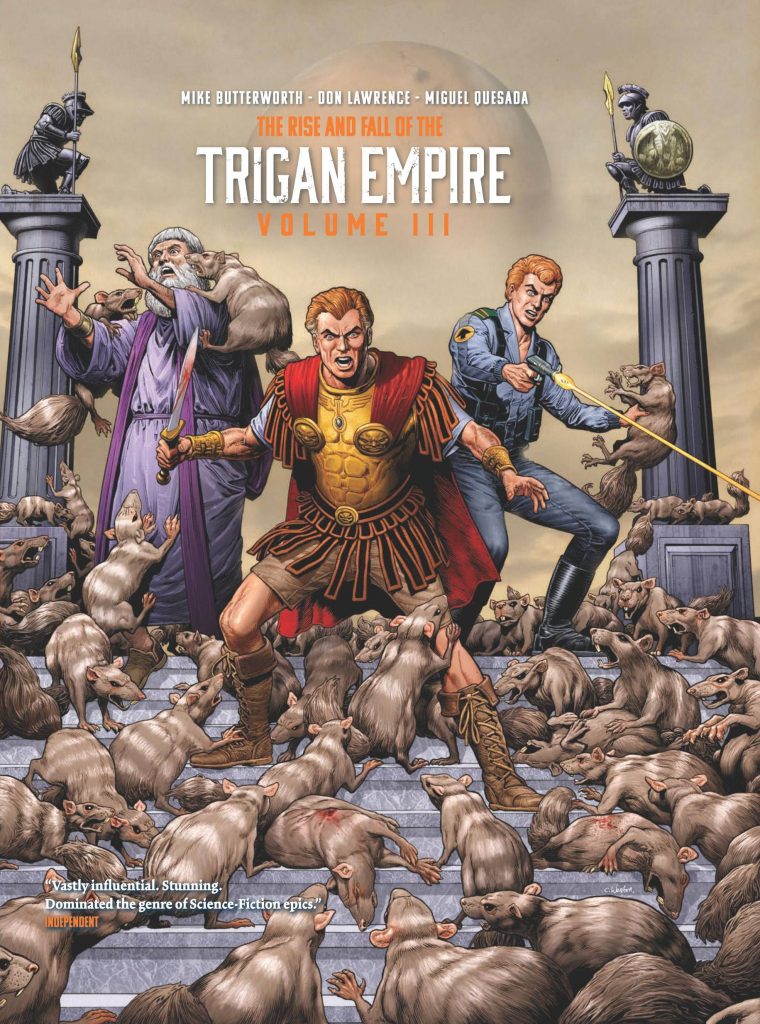 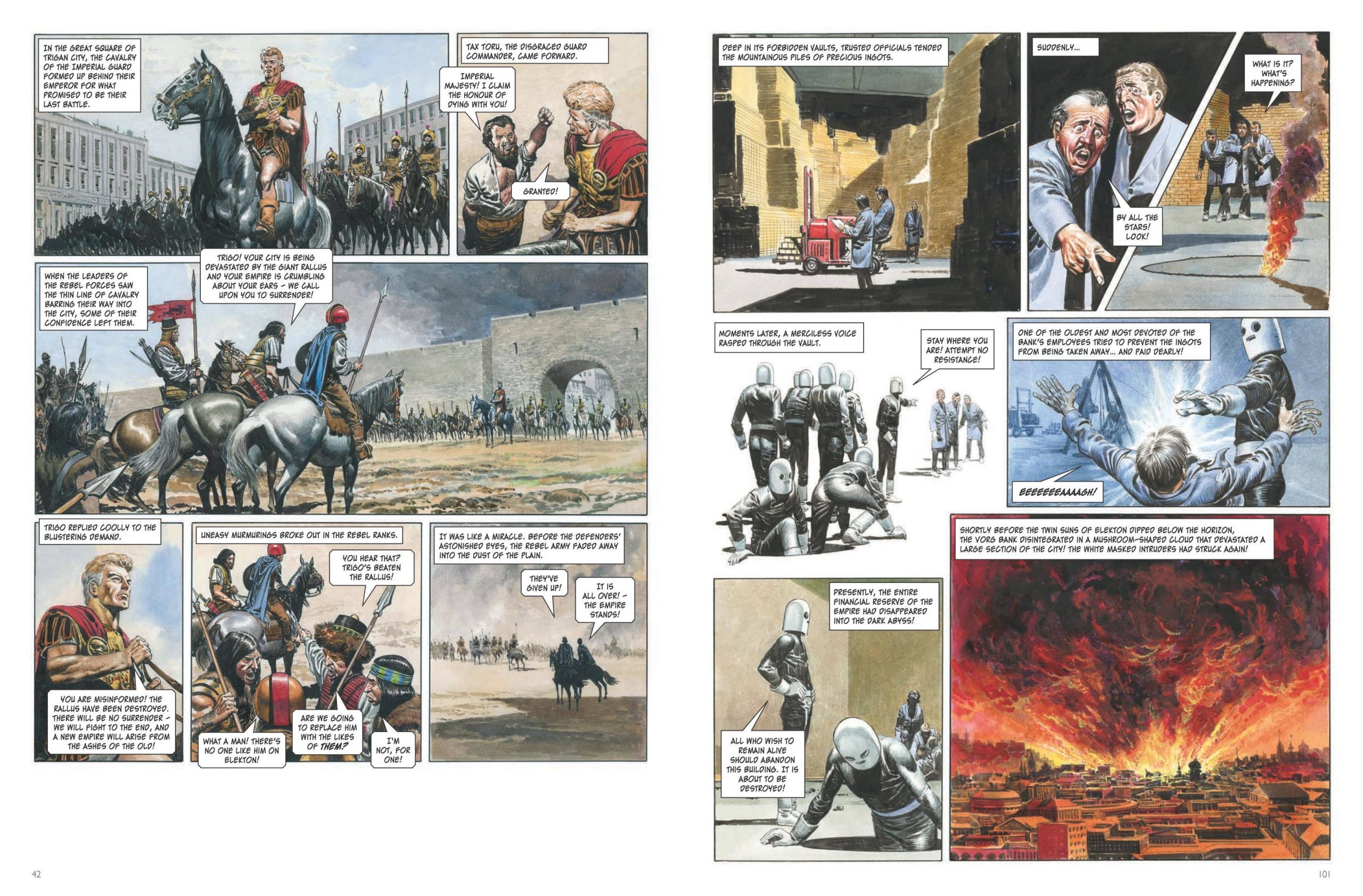 This third welcome collection of the UK’s best ever adventure strip in an affordable format covers the work of Mike Butterworth and Don Lawrence from late 1970 to early 1973, with the brief interlude of a strip drawn by Miguel Quesada.

It’s another showcase of plain stunning art. It’s difficult to find any kind of weakness. Perhaps some of Lawrence’s designs for monsters are now on the dated side, and his Mummy is a little hokey. However, weigh that against the expansive page designs, the sheer variety of what he draws and the beautiful portraits on every page. He’s settled into likeness for regular main characters like Emperor Trigo, his nephew Janno and chief scientist Peric, but people only seen for a single story are equally distinctive, and look at the sheer amount of work put into the left hand sample art. The series has long progressed from looking like an updated Roman empire, although the rulers still employ that form of dress much of the time, and it’s interesting to see Lawrence merge the architecture and fashions of 1970s Britain with flying cars.

One of the best stories, the closer, opens in a rustic stone and wood shepherd’s hut, followed by a the nice contrast of a modern city featuring scattered ancient Greek-style structures. Mike Butterworth plots a story about a shepherd given a glimpse of a dictatorial future where Trigo has been deposed and the people have little freedom. Back in the present he has to convince the ruling council that his experience is accurate, and prevent that future occurring. Other gems include the dangerous raiders able to access anywhere (right sample art), a villain controlling miniature robot soldiers, the city invaded by ravenous rodents as large as cats, and the ingenious use of a duplicating machine.

The stories were serialised at two pages per week, so Butterworth packs a lot into the plots, and by 1970 had settled on somewhere between nine and twelve weeks as the ideal length. It leads to some extremely rapid endings like a conqueror tumbling to their death in their moment of triumph, or a seemingly unconquerable foe being bitten by a snake, and don’t look for satisfying explanations. How the city’s water supply was restored, or why a revolution can be stopped just by Trigo showing himself weren’t questions Butterworth felt it necessary to answer, although he does supply whimsical closure to the story of a missing person. That’s another good inclusion.

Quesada draws the brief moment in the spotlight for ‘Doran the Hypnotist’, the subsequently applied title rather giving away the solution as to who’s behind a series of disasters. It’s a functional piece with functional art, so nowhere near the usual quality. It being the shortest story in the collection is for the best.

As in previous volumes, Butterworth resorting to stock situations is apparent, but he varies those situations every time. Each person plotting a coup has a different motivation, and the scenario plays out differently, meaning while there are couple of duffers, almost every story here is still a very good adventure.

For the wealthier purchaser, a hardcover edition is available with a Chris Weston cover, or there are the earlier oversized hardcovers of the Don Lawrence Collection. The stories here are found spread across The Puppet Emperor, The Rallu Invasion, The Prisoner of Zerss and The Curse of King Yutta. Follow the links for more information about individual stories.