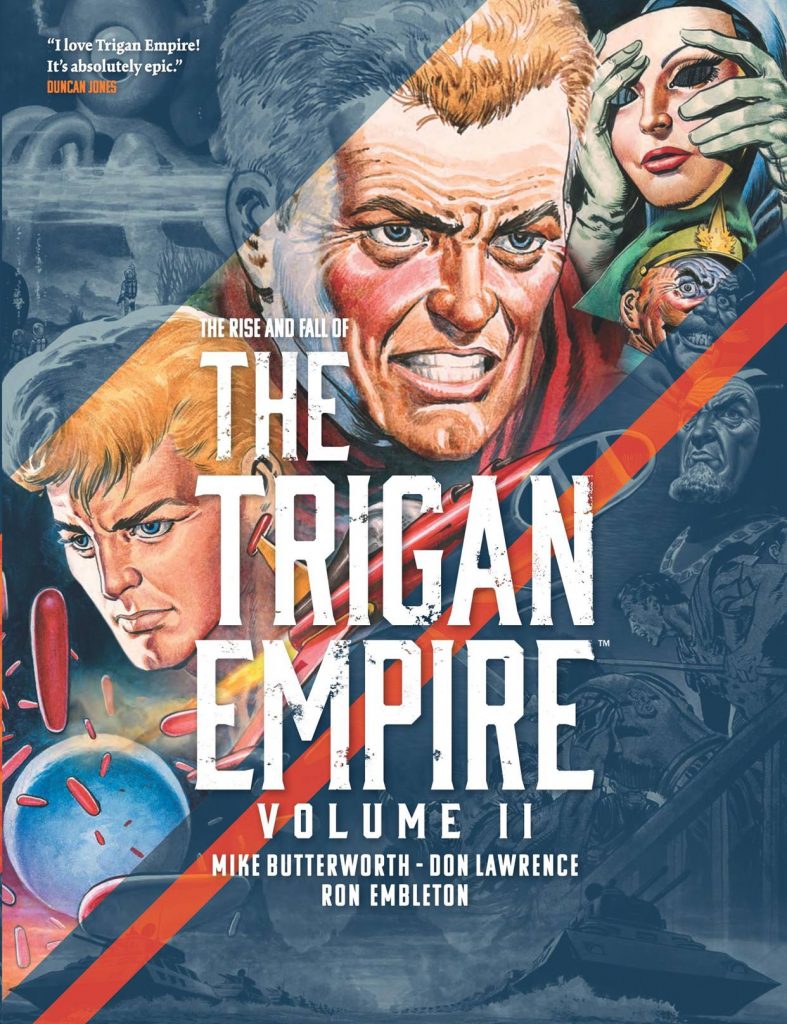 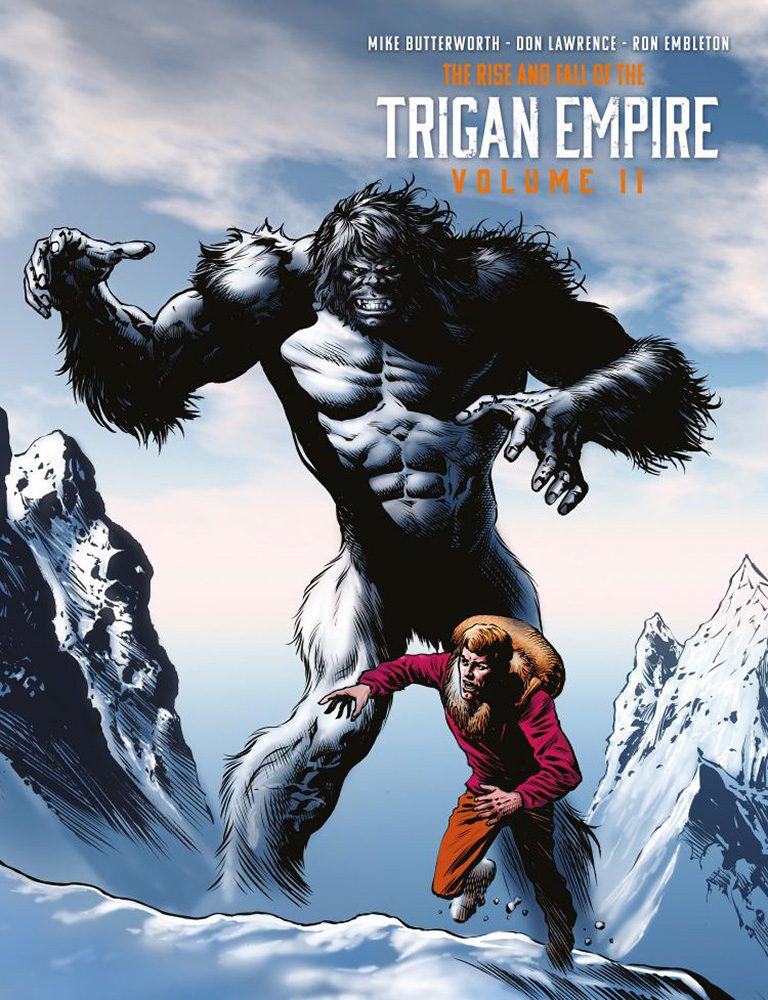 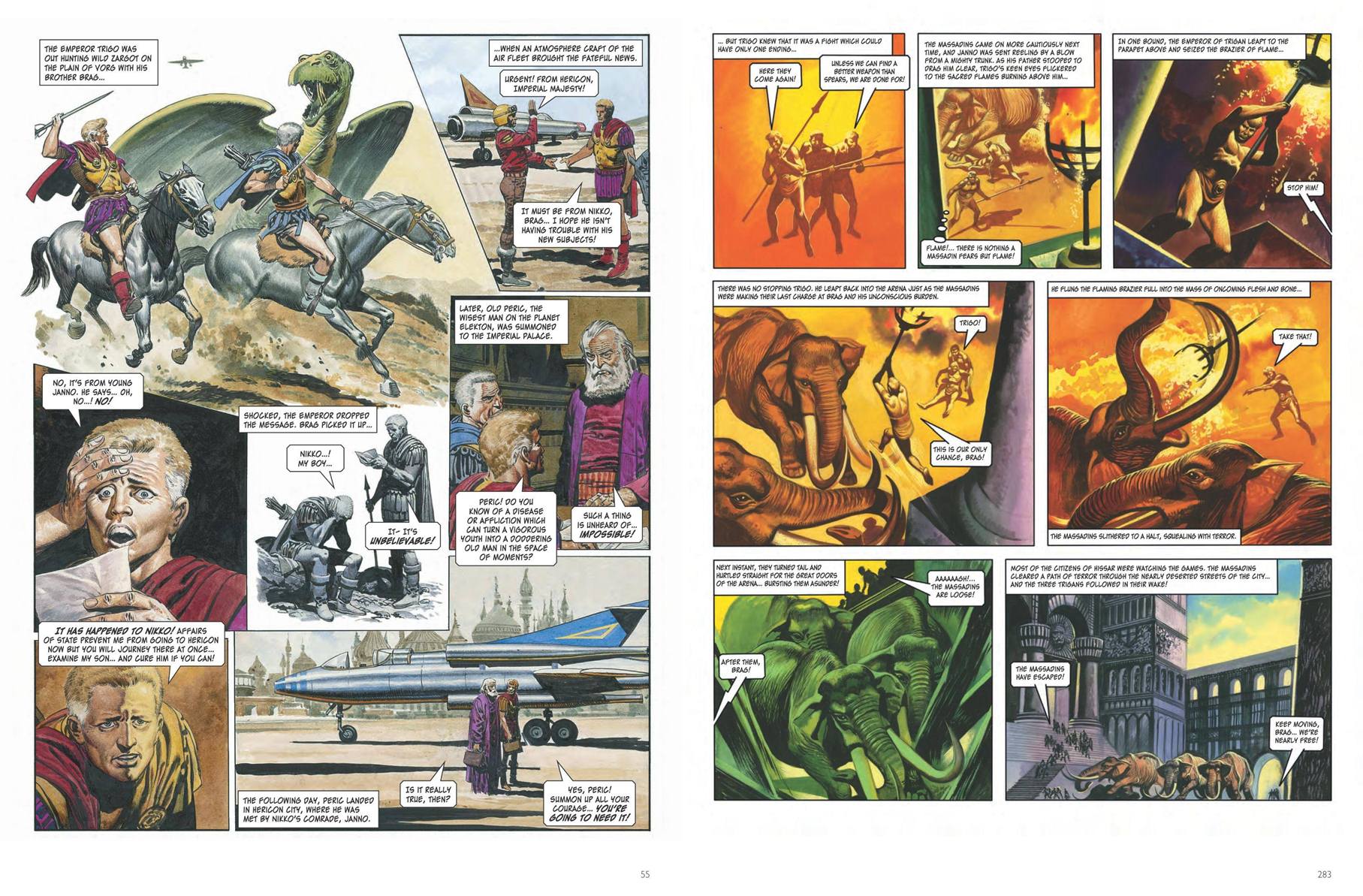 The superlative and elegant art of Don Lawrence is the reason The Trigan Empire is so fondly remembered, every cultivated page something to be treasured. It’s remarkable, then, that Chris Weston’s introduction reveals that during his time as Lawrence’s assistant in the 1980s he never saw him resort to reference material. Whether that was the case in 1967 to 1971 when he drew these stories can only be conjecture.

Artistically, this is as strong as the first Trigan Empire collection, Lawrence revelling in the pseudo-historical and science fiction mash-up provided by Mike Butterworth’s scripts, the Trigan Empire being based on the Roman one, but with access to futuristic technology. Lawrence supplies gorgeous landscapes, beautifully composed people, appropriate expressions and a great sense of staging. If straining for a weakness it could be noted that some of his designs for aliens and monsters are now of their era. Balance that against the thrills to be found in ‘The Three Princes’, which features a giant whose fingers are the size of humans, a monster from the deep, some thrilling aerial combat, scenes at sea and on a mountain and knights of old as well. That story has a shocking start with Trigo’s wife giving birth to triplets, two of whom must be disposed of in order that there are no future disagreements about which is his heir. It may be an accurate representation of historical priorities, but is cold-blooded for a 1960s children’s comic.

When assessing Butterworth’s plots it’s important to remember they were created in an era before collections were ever considered, and run at just two pages a week, so the sixty pages of ‘The Three Princes ran for half of 1967. The editorial expectation was that readers didn’t have long memories, so Butterworth didn’t concern himself with continuity (Trigo’s wife is never seen again), and had a fondness for repeating situations. Devices he frequently uses include an alien arriving to cause trouble, people’s behaviour altered by application of nefarious substances and Trigo either deposed or narrowly avoiding it. Any individual story from this selection thrills and surprises as intended, so it’s only when they’re cross-referenced that the minor glitches occur. ‘The Alien Dust’ is an example, stitched together from several earlier scenarios.

Most of these stories were previously reprinted in three lavishly produced oversized hardcovers titled The Three Princes, The Red Death and The Puppet Emperor. Missing from those are ‘The Terror of Mount Spyx’ and ‘The Brief Reign of Sennos the First’, both drawn by one of the few British comic artists who can legitimately be ranked on Lawrence’s level. Despite this, Ron Embleton’s work (sample right) is slightly stiffer and more posed on what’s an action special with erupting volcanoes, prehistoric terrors and invaders with futuristic craft and weapons. The second story is Butterworth again resorting to Trigo being deposed, this time in his absence, but the plot confounds expectations.

As with the first volume, it’s a collection of stories representing an artistic highspot in British comics presented in an affordable format some thought they’d never see. Roll on volume three. This also comes as a very limited hardback edition as per the alternate cover.