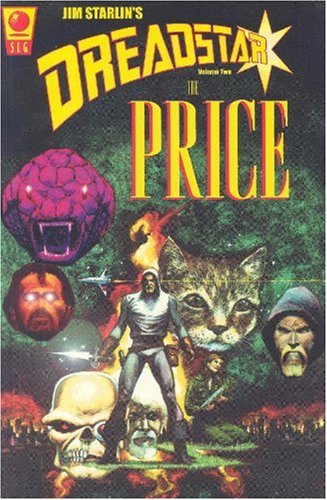 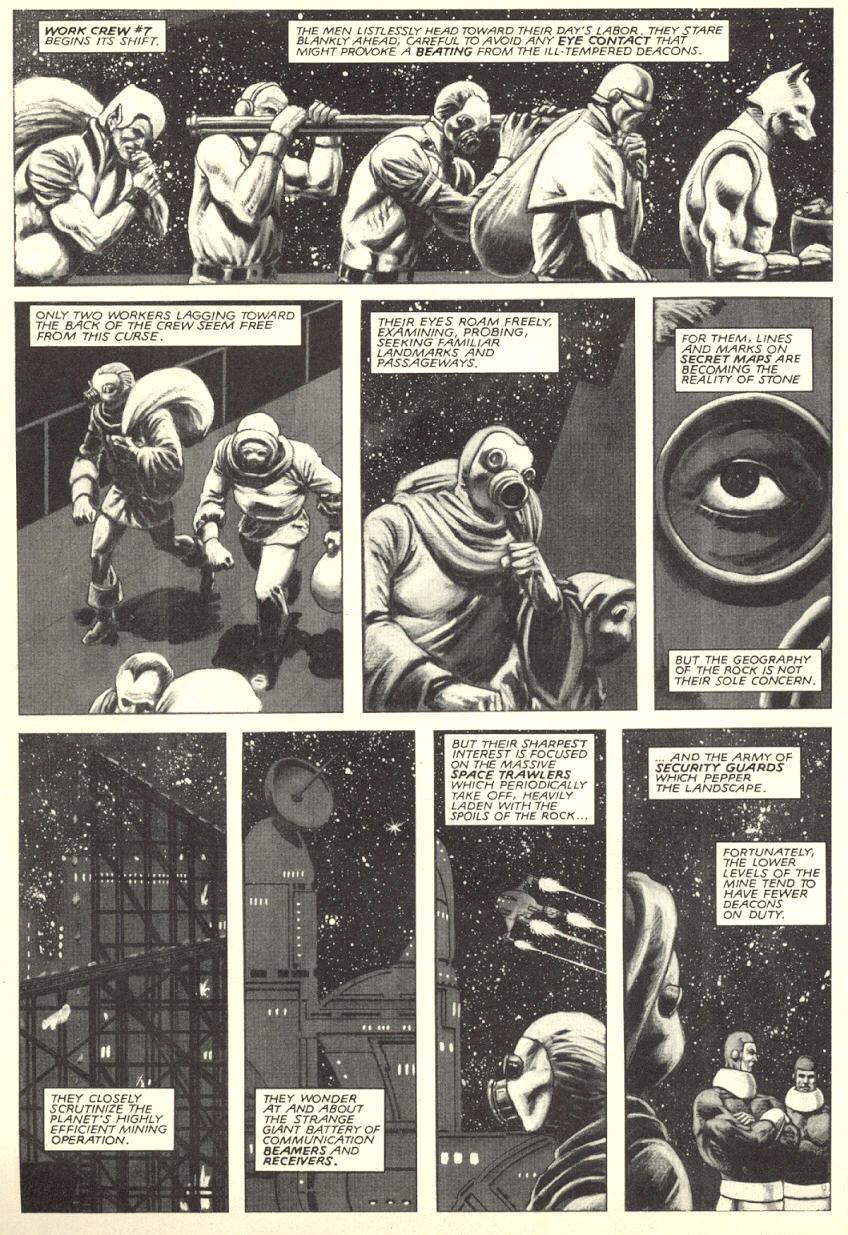 This book is only vaguely connected to its predecessor The Metamorphosis Odyssey via the presence of Vanth Dreadstar. The setting is what to him is a new universe, but one which has evolved for millions of years. The political set-up, however, revisits the themes Starlin toyed with in Warlock. Two great establishments dominate. The Monarchy is a dynastic organisation, and the Instrumentality’s tenets are a form of religious mysticism. Each control half a galaxy, and they’ve been at war for two centuries.

It’s with the Instrumentality that we start in the title story, as Sysygy Darklock, a robed bishop with high connections is given leave to investigate his brother’s violent death. Darklock covets power and possesses considerable mystical talents, which lead to consorting with a cat-headed demon. He’s wary, but greedy: “Demons deceive in more ways than words alone, but I’ve no alternative. It’s either follow Bialgesuard or abandon my quest”. Will ambition supersede common sense?

As is apparent by the conclusion, Sysygy will have a part to play in Dreadstar’s ongoing escapades, and ‘The Price’ is a somewhat ponderous method of introducing the pair to each other. More ponderous content follows in what was previously published as an original graphic novel, Dreadstar. It’s all rather pointless foreplay to reinstate Dreadstar as a warrior with a larger purpose. “Big solutions tend to grind people into the grave”, he preaches, “so we’re going to do it my way.” Action is minimal, talk is maximised and the pay-off isn’t very thrilling when it occurs.

There’s another problem. Both ‘The Price’ and ‘Beginning’ were originally published in black and white, so there’s no production deterioration. Dreadstar, though, was originally a fully painted graphic novel. The painting sucked much of the dynamism from Starlin’s pages, as it didn’t match the quality of his linework, and reducing it to splodgy black and white further lessens what there is to admire about the artwork.

‘The Beginning’ is a return to form, almost equalling The Metamorphosis Odyssey. It’s a concise run through of Dreadstar’s experiences to date, retelling the material related from his viewpoint, and it’s wrapped within a taut story beginning as a raid, but becoming a rescue mission against time. Starlin pulls his pivotal moment from an old Spider-Man comic, but re-purposes the motivation to good effect, adding a new character to Dreadstar’s crew. It leaves Dreadstar in fine fettle for what was to be an ongoing series, collected either as the Dreadstar Omnibus, or in smaller segments as Dreadstar: Definitive Collection.

That story is also more representative of the following Dreadstar series, which featured one tightly plotted thriller per issue. Is this also the place to mention just how poor the cast names are? Or is that just because the preponderance of characters at 1990s named by welding two ever more ridiculous words have opened our eyes?

The Price is long out of print, and is better experienced as Dynamite Entertainment’s Dreadstar: Beginnings, which collects this along with the previous The Metamorphosis Odyssey.