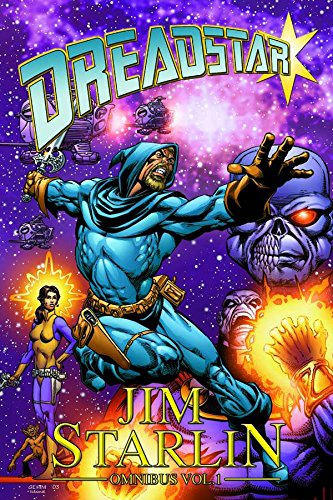 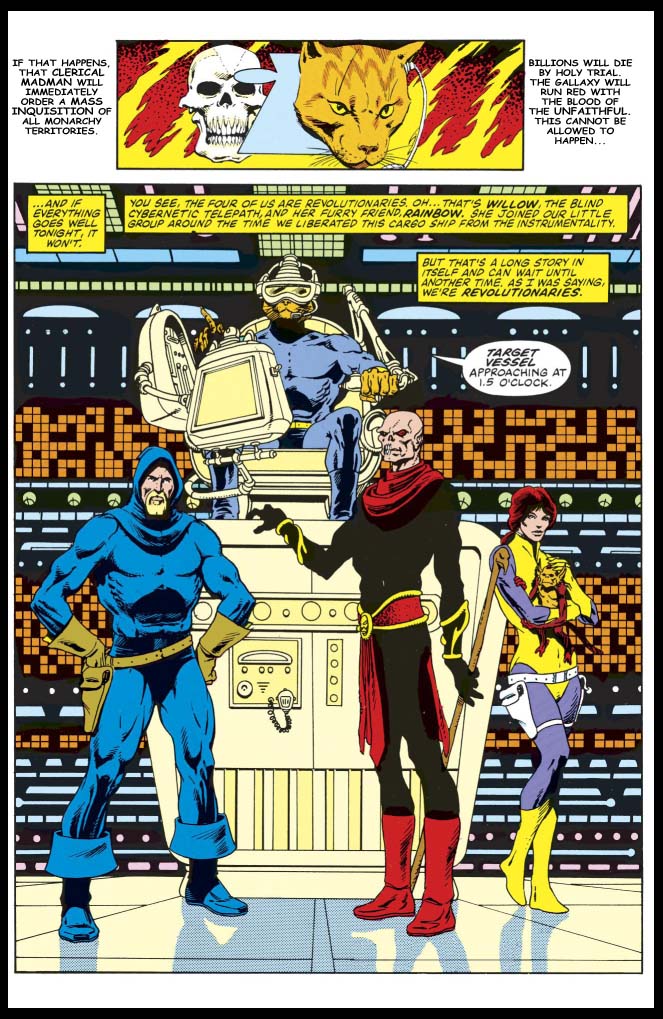 With Dreadstar currently in TV development, this is probably the place to for new readers to start rather than with the patchy Dreadstar: Beginnings. This not only maintains a higher overall standard and a single focus, but also sits definitively within the Star Wars style space adventure genre. Futhermore, most salient moments of Beginnings are concisely addressed in the opening chapter, and another just after the midway point.

Although it’s largely irrelevant, Vanth Dreadstar is the sole survivor of the previous galaxy, destroyed a million years previously, and possessor of the prodigious Soul Sword, a weapon he can secrete within his body. While he remained in suspended animation a new civilisation evolved into which he emerged. Two great powers, the Instrumentality and the Monarchy, each control roughly fifty percent of known planets, and Dreadstar has vowed to bring them both down.

To this end, he’s gathered an exceptionally talented crew, whose numbers increase here, and has an ambitious plan, although it takes some time before we learn the fine detail. Starlin perpetuates a fine sense of foreboding – “Today’s carnage is destined to be permanent”, hisses a scheming villain at one stage – primarily via having established that Dreadstar and crew may be immensely powerful individuals, but they’re facing the assembled resources of two entire galactic organisations. This also introduces an element of tension as while the title character won’t be shuffling off this mortal coil, the same certainty doesn’t apply to his companions.

Dreadstar was one of the earliest creator-owned projects, and Jim Starlin thoroughly enjoyed producing it, or did at this stage at least. His plots are varied within the genre, he shifts the focus around his characters, and, unusually for what was originally a serialised comic, there’s significant plot progression within the dozen issues collected.

Artistically Starlin is also enjoying the freedom, and there are some spectacular pages. Of particular note is his managing to compress the divided galaxy’s entire political scenario onto a single page that not only conveys the information, but is also extremely decorative. He packs his panels to give a proper impression of a heavily manned spacecraft, or alien city, and within the basic humanoid bipedal form designs an impressive array of species. Writing and drawing a monthly comic does begin to take its toll, however. While the art is never anything other than professional, toward the end of the book there are some shortcuts and the page designs are more ordinary.

It may be a space adventure series, but Starlin’s background encompasses some big issues. There’s the pernicious exploitation of religion, the perpetuation of war for profit, and the still prevailing inexplicable attitudes to skin colour for starters, but these never overwhelm. It isn’t perfection, but the flaws are minor – the of their era bombast of the names, some derivative characters. Starlin keeps the action and adventure to the forefront with often surprising plots, and if the joy and variety of this content can be successfully transferred to TV, this will be something worth watching.

This material was previously repackaged as two volumes of Dreadstar: Definitive Collection, and a second volume is scheduled for early 2017, continuing the saga by presenting material never previously gathered in book form.