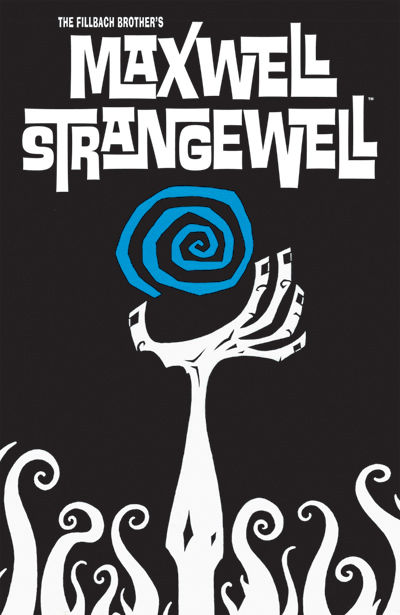 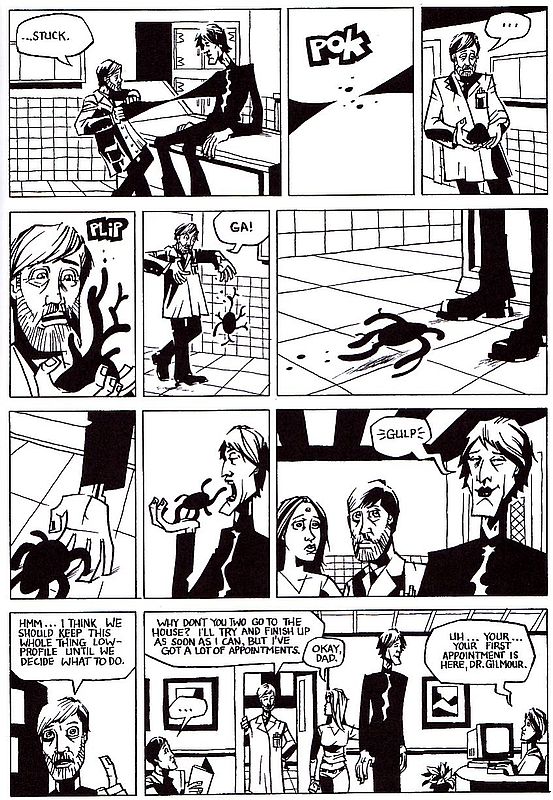 In the Fillbach Brothers’ graphic novel Maxwell Strangewell, a tall, dark and mysterious stranger crashes on Earth, causing all hell to break loose as various alien factions vie for the control of the powerful being. While the Strangewell bonds with a young woman, humanoids with a popping-up third eye, tentacled monstrosities, diminutive worshippers and quite well-informed Buddhist monks enter the game. A game that might end with the destruction of the planet.

Matt and Shawn Fillbach have created a very entertaining graphic novel, with so many disparate influences and parts that they shouldn’t work together — but they do, thanks to the infectious fun that permeates the book. For a story concerned with eon-old cosmic beings and parties prepared to do anything in order to achieve their goals, the opportunities to smile and even guffaw abound throughout the book: some situations and ideas wouldn’t be out of place in a Hitchiker’s Guide to the Galaxy book or a Red Dwarf episode.

The narrative makes sure to keep its main protagonist mysterious: Max, as Anna (the young woman he bonds with) names him, says even less than a Clint Eastwood character, but he wears his emotions on his sleeve like a child. Anna, an ordinary person thrown into an extraordinary adventure, enables reader identification, while the whimsicalness of the imagination of the authors is a welcome complement to the scale of the story.

The fact that this is a 400-page book is another plus: there’s enough room for a large variety of tone, and the Fillbach Brothers make full use of that, as well as extended action sequences and full-pages with a strong Wow! factor.

While the book is in a small format, the pages are dense, with layouts as varied as the ambiances of the story. The art is stylised, firmly set in the cartoon aesthetics (somewhere not too far from Michael Avon Oeming’s work) and the artists seem as at ease drawing a face or a car as when they give us baroque aliens or metaphysical landscapes.

While their story could have been played as a “right makes might” tale, as with most superhero comics, the Fillbach Brothers have chosen another option, which should please readers who enjoy grand cosmic action all the more as they’re not being taken for fools.

Maxwell Strangewell is that rare kind of graphic novel where you might buy it for the fireworks but you’d definitely stay for the fun, the engaging characters and the mind-opening visuals and ideas.