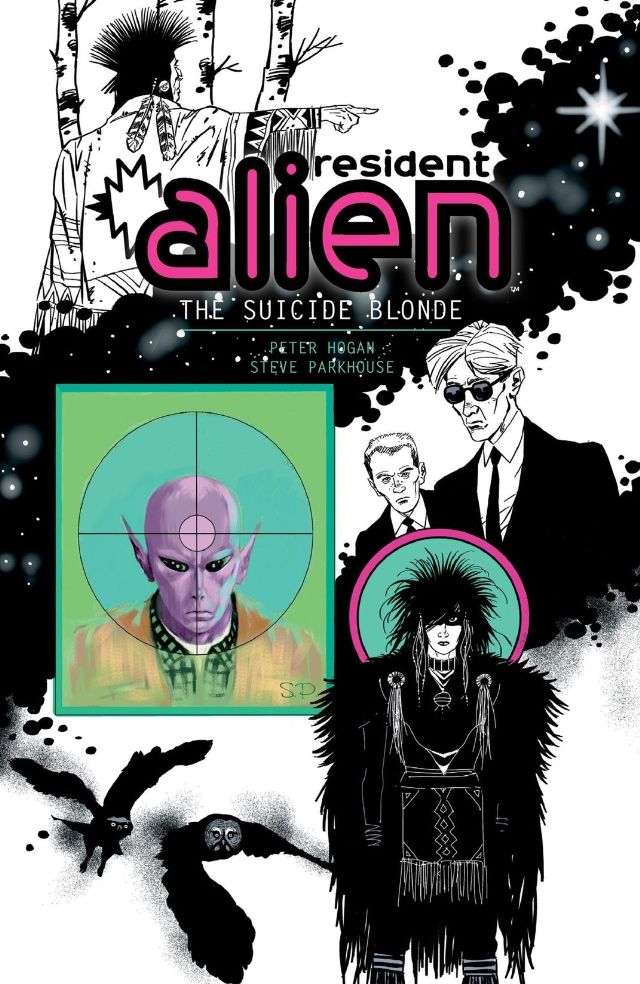 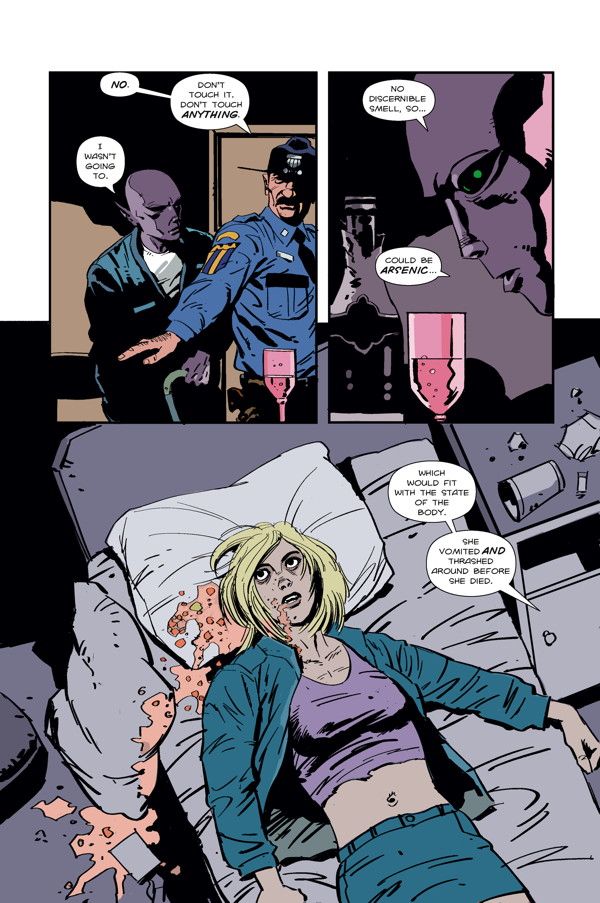 A blend of sci-fi, police procedural and social observation, Suicide Blonde continues where Welcome to Earth! left off. It’s an interesting concept from writer Peter Hogan and artist Steve Parkhouse. Harry Vanderspeigle is not all he seems. To the people around him he’s a semi-retired doctor filling in for the town of Patience’s deceased one, and an all-round likeable guy some of the townsfolk have befriended. In reality, Harry is an alien stranded on Earth awaiting rescue, using some of his species’ gift of empathy to camouflage himself from prying eyes. Among his alien abilities is being able to discern whether someone is telling the whole truth or not, making Harry quite adept at solving crimes, which endears him to the town sheriff. Since Harry needs to find something to do other than read trashy pulp thrillers, this arrangement suits Harry well enough.

Still coming to terms with the death of their last doctor (Welcome to Earth), Patience is rocked when a young woman is found dead in a motel, suicide beginning to look more and more like murder. When one of Harry’s friends is tied to the victim he sets out to clear his name, only Harry’s arrival on Earth three years previously has not gone unnoticed and government agencies are picking up the trail.

Peter Hogan’s intention is to explore the depths of humanity in Resident Alien, quite effective really when you use an alien’s perspective. It isn’t exactly a new concept, but it works and part of the charm is Hogan’s whimsical writing, creating interesting interactions between relatable characters. Hogan’s story is good, not brilliant, but decent enough that you don’t regret reading it. Steve Parkhouse’s cartooning works incredibly well and is superbly rendered, especially during the dream sequences of Harry’s home world. The players feel human (even Harry) because one thing Parkhouse is brilliant at capturing is the depth of human emotions. What doesn’t communicate as well are some rather grey flashbacks to the men in black looking for Harry, Parkhouse’s work far more enjoyable when it is in colour.

It’s an interesting concept for a graphic novel and one that has a TV pilot in preparation. With hidden musical references (throwbacks to Hogan’s music journalist days) and quirky writing Resident Alien will definitely appeal to some readers more than others. If you like your brand of sci-fi hard-boiled then Suicide Blonde is likely to disappoint. It certainly doesn’t follow the template of explosive action and futuristic settings, yet still carries that attribute good science fiction is all about: a social commentary that doesn’t challenge us directly at first, leaving a little seed of thought in the subconscious that eventually reaches our thinking.

The series continues in The Sam Hain Mystery.