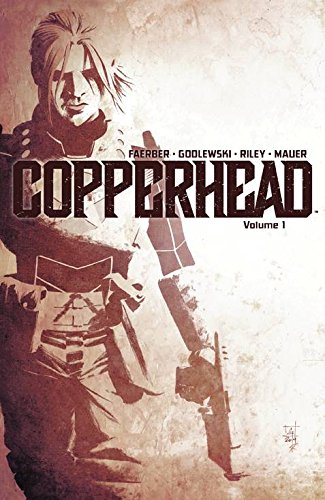 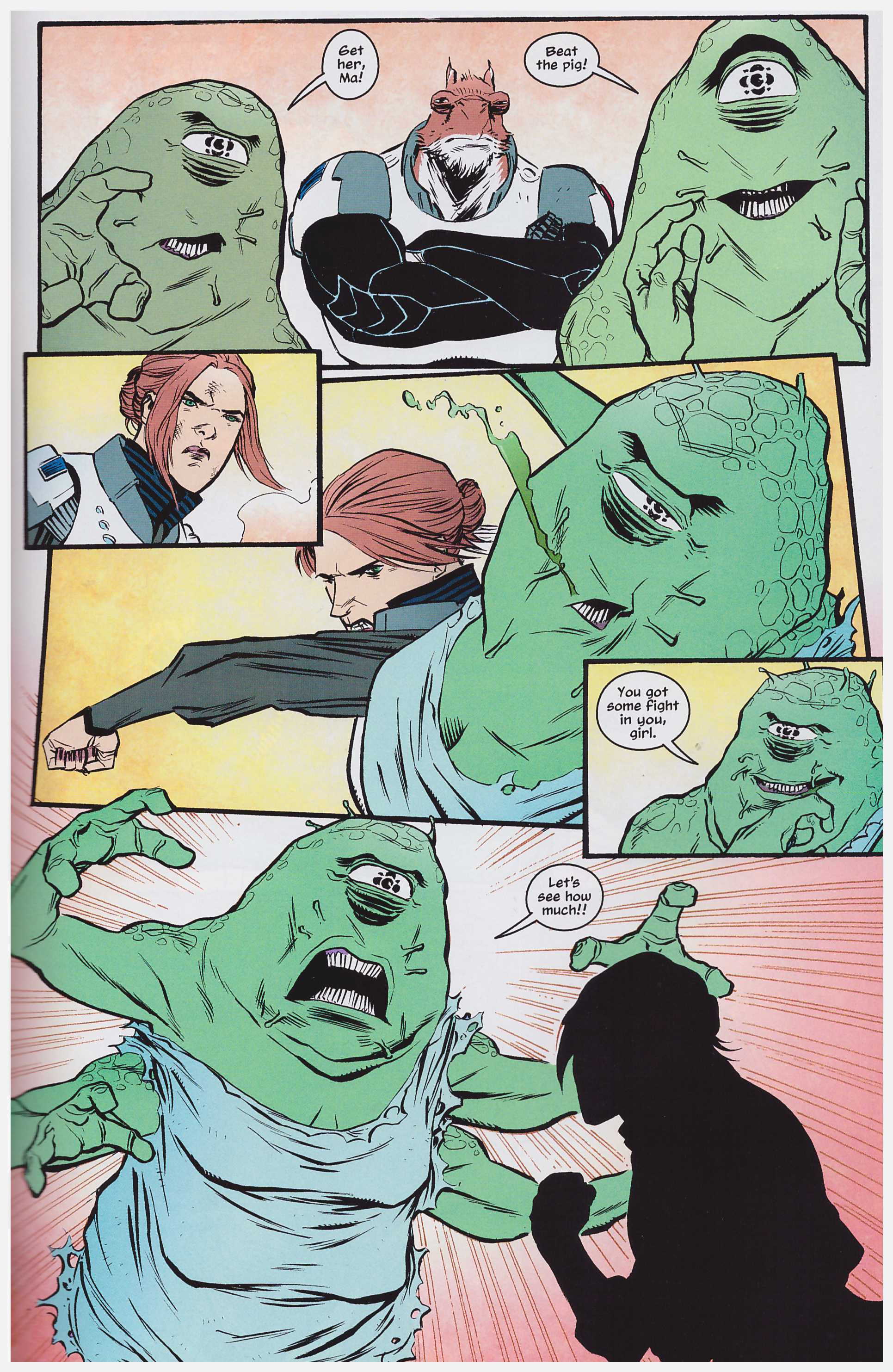 This mash-up of crime drama, western and science-fiction begins relatively slowly, which is quite unusual given Jay Faerber’s known ability to throw in shocks and twists, but stick with it. We open on a train with Clara Bronson and her young son Zeke, heading for the mining community of Copperhead. There’s one good surprise in the opening pages, so don’t read beyond the third paragraph if you’d prefer to remain ignorant.

Artist Scott Godlewski has an irritating stylistic quirk of drawing all humans with cartoon chins that come to a point. If you can live with that, the bigger picture opens up. He’s fullsome with his background detail when needed, has a fine design instinct that really brings a grubby, run-down town to life, and this is further applied to the varied alien population on show. If any indication of his imagination is required beyond flicking through the book, take a look at the four-armed Sewell family, lumpy green creatures somewhat reminiscent of Doop, but it’s the eyes that impress. Instead of a single pupil, Godlewski’s design has an ornate pattern. As a story element it’s passing caprice, but as an indication of the thought he’s applied it’s recognition of an artist who cares.

Faerber’s been equally inventive in constructing his back story, although background notes supplied at the back of the book indicate Godlewski’s participation also. Copperhead is on a planet colonised by humans after a war. The society is supposedly integrated, but there’s an invisible ceiling ensuring none of the large furry species acquire positions of control or importance, which induces resentments. In order to win the war, android warriors were employed, now cut loose and spurned, and there’s a further species in the badlands, wild, dangerous and aggressive. Although parallels can be drawn for those who really strain, it’s noted that this isn’t intended as any kind of commentary on real world events, past or present.

While the designs are good, the impression over the opening two chapters is that there’s nothing original to be mined. Benson is revealed as the town’s new sheriff, dispatched to the violent backwater for previous transgressions. She throws her weight around to assert her authority, and the back-up cast are all recognisable archetypes, if shrouded in alien skin. As the book continues, though, the crime elements seep in and open the plot up. Faerber leads us on a merry path of misdirection, while simultaneously taking us on the tour of Copperhead and environs.

There’s also a considerable heart here, with family matters at the centre of the plot, and some witty dialogue. The local plutocrat attempts to have Benson removed as she’s not compliant, and is told by her assigning officer “We used to ride together, and one day I told her I liked the way her hair looked. She broke my nose.” From there the conversation becomes even funnier.

Copperhead could stand alone with this story and would be an extremely satisfying character-driven read. Thankfully, there’s a volume 2.