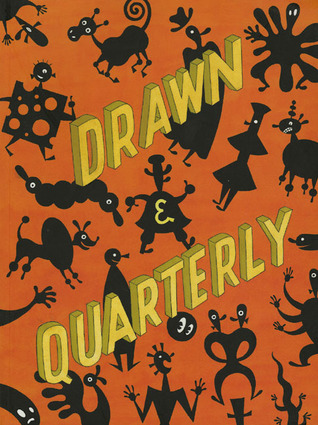 The relaunched Drawn & Quarterly anthology struck gold the first time out with volume 3, and this is barely behind. The page count drops a little, but with fewer contributors the intent remains to deliver substantial work in both sense of the term.

Once again, a complete French album occupies the greatest number of pages, this time a biography of Tintin’s creator Hergé written by Jose-Louis Bocquet and Jean-Luc Fromental, and illustrated in appropriate ligne claire fashion by Stanislas (Barthélémy). It’s delightfully drawn, but lacks any real insight, although for those just familiar with Tintin it’s quite the eye-opener. In 2011 Drawn and Quarterly issued this as The Adventures of Hergé, under which it’s reviewed in greater detail.

It’s safe to say no-one had previously considered Little Lulu as a method of re-working Nathaniel Hawthorne’s The Scarlet Letter until R. Sikoyak. As he achieved with Crime and Punishment in volume 3, Sikoryak distils the essence of this study of guilt, hypocrisy and repentance to twelve pages, casting Lulu as Pearl, and her mother as Hester Prynne. Tubby standing in for Roger Chillingworth adds an extra level to the already pervasive surreal quality of seeing Irving Tripp and John Stanley’s style applied to such material.

Sikoryak is one of four creators returning from the previous volume, as is Blutch (Christian Hincker), who supplies another of his boxing vignettes. His loose, grimy and starkly contrasted black and white style is ideally suited to the subject matter of racism. Another returning creator is Frank King, with thirty more Sunday colour pages of his Gasolene Alley strip, prefaced by the informative Chicago Sunday Tribune magazine article that celebrated the strip’s 40th anniversary in 1960. The emphasis this time is less on the strip‘s pastoral and design qualities, but on the charm and humanity of the relationship between Walt and the infant Skeezix.

Miriam Katin’s later books focussed her childhood recollections of Hungary under Nazi occupation (We are not Alone) and how this complicated her life decades later (Letting it Go), but her second ever comic strip concerns the 1956 Hungarian revolution. As in later work she contrasts present with past via use of colour panels in otherwise detailed black and white pencil art, and relates how caution with alcohol began with events whose significance was not entirely comprehended at the time.

Ron Rege Jr is an utterly unique creator. One can only imagine the intellect devising his material, and his art is equally distinctive, both in its design and application of colour. His exploration of early mathematician Fermat’s trials and theories is presented as a varied selection of short strips offering assorted perspectives. It’s quite the wonder. This volume’s ‘and nothing happened’ strip comes from Nicolas Robel, channelling Jeffrey Brown and James Kochalka, and there’s a greater selection of work from Harry Mayerovitch here, concentrating on his starkly effective posters for the Canadian Film Board during World War II. It’s accompanied by an interview with the then ninety year old Mayerovitch.

As with the previous volume, this is a beautifully designed oversize book, with the decorative cover and endpapers the work of illustrator Steven Guarnaccia. Sadly there was to be only one further volume.