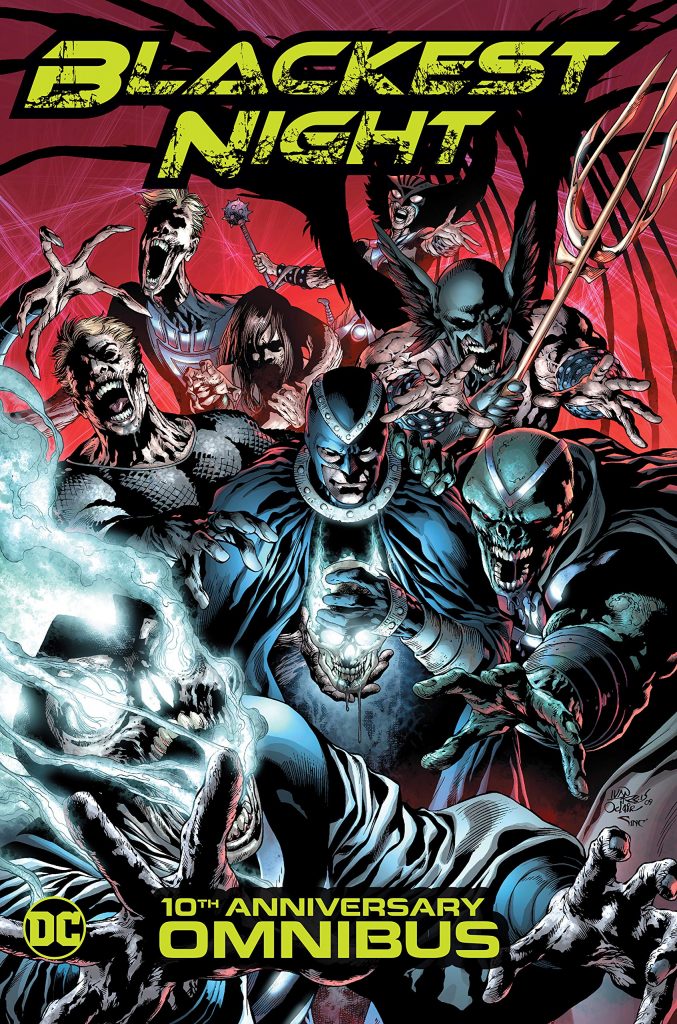 Every superhero crossover is hyped to the maximum, excitement generated, and it’s only after the event that any legacy is established. By those terms, a crossover series still in print a decade on is a sales success. However, only the core Blackest Night graphic novel and the Green Lantern tie-in have remained in print, and four associated graphic novels are only found as used copies, a couple expensive (although digital versions are available). That they’re again available in this monster 1664 page Omnibus is a major selling point.

Geoff Johns conceived Blackest Night, which spun from his work on Green Lantern, where he’d introduced the concept of lanterns and rings of all other rainbow shades. It has a strong emotional core, or at least the potential for it, as it isn’t always best exploited. The premise is dead friends, colleagues and villains associated with DC heroes returning to life as a form of speaking zombie (a term deliberately avoided by DC), powered by a black ring, their purpose being to kill. “With this power I will finally extinguish the light”, promises villainous catspaw Black Hand concluding the prologue chapter.

DC have been exhaustively complete, mopping up isolated comics that evaded collection in previous editions, and adding a further fifty pages of preparatory material and insight from the primary creators. In that sense, if you loved the original stories, have the money and want to upgrade, it would seem you can’t go wrong with this Omnibus, but there’s a crucial caveat. The eight original chapters of Blackest Night read as a complete story requiring little reference to other material. Perhaps Hal Jordan turning up halfway through in the company of assorted other Lanterns was too convenient, and reference to the Green Lantern tie-in graphic novel gave the reasoning, but otherwise it was a smooth read from start to finish. In this edition that’s not the case. The decision has been to present events chronologically, rather than main story followed by tie-ins, so now the second and third chapters of Blackest Night are separated by nine other episodes, three of them themselves starting three chapter continued stories. It produces a sprawling, fragmented and frustrating read, much of the good work dragged down by the dashed off and average, creators commissioned for tie-ins who didn’t really care about the concept. As a rule of thumb anything by Johns maintains the quality, as does the work of Peter J. Tomasi if you can accept his tendency to stretch the boundaries of good taste with some unpleasant dialogue.

There are few artistic problems, with almost everyone involved producing first rate superhero art. It’s Patrick Gleason, Doug Mahnke (sample art left), and Ivan Reis (sample art right) who’re the three primary artists. Gleason’s viewpoints tend to pull in too close too often, and Mahnke can give characters a speed freak’s eyes, but both deliver some spectacular pages, with Reis the star of the show, consistently managing to deal with dozens of characters without crowding his layouts. The enlarged presentation makes the art look even better. 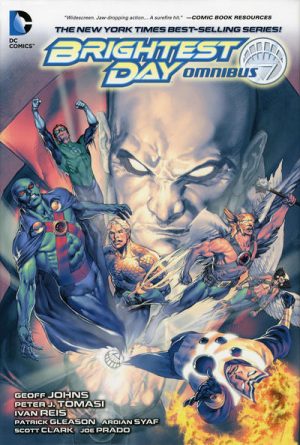