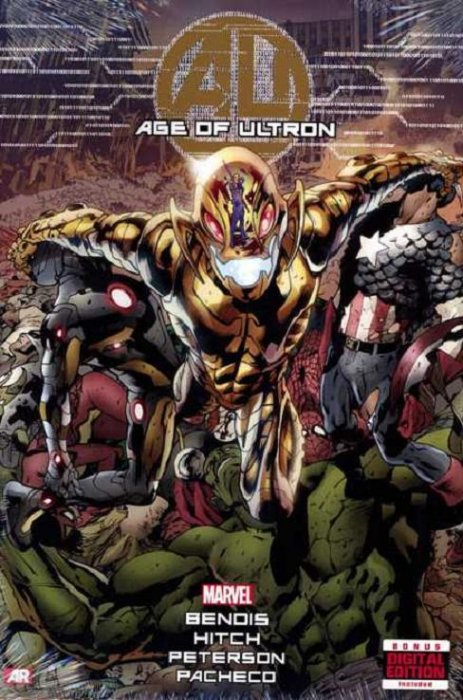 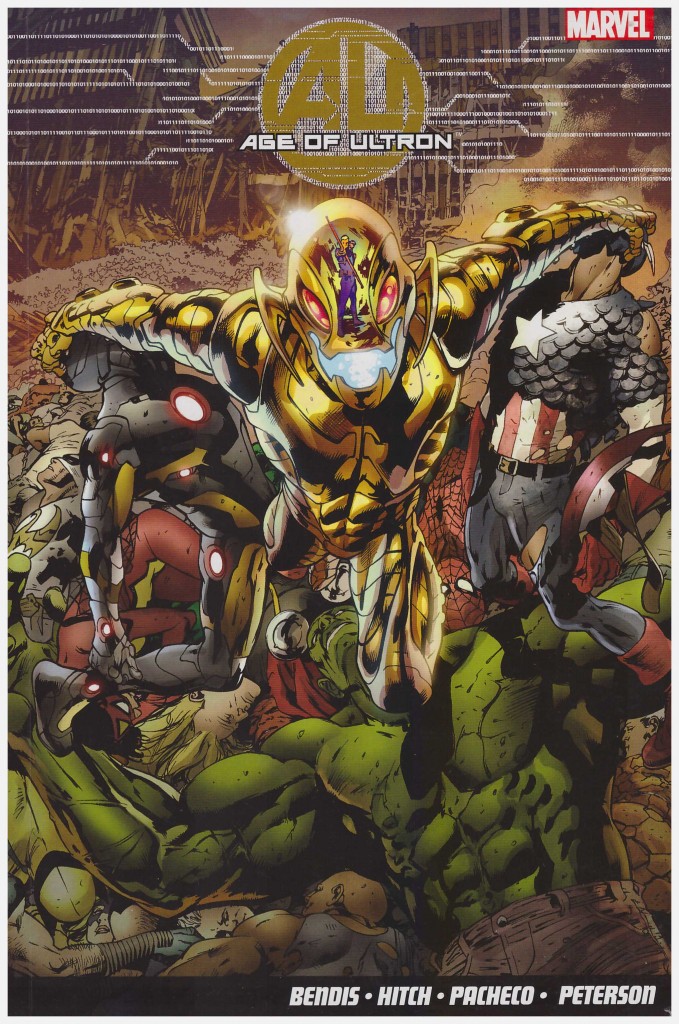 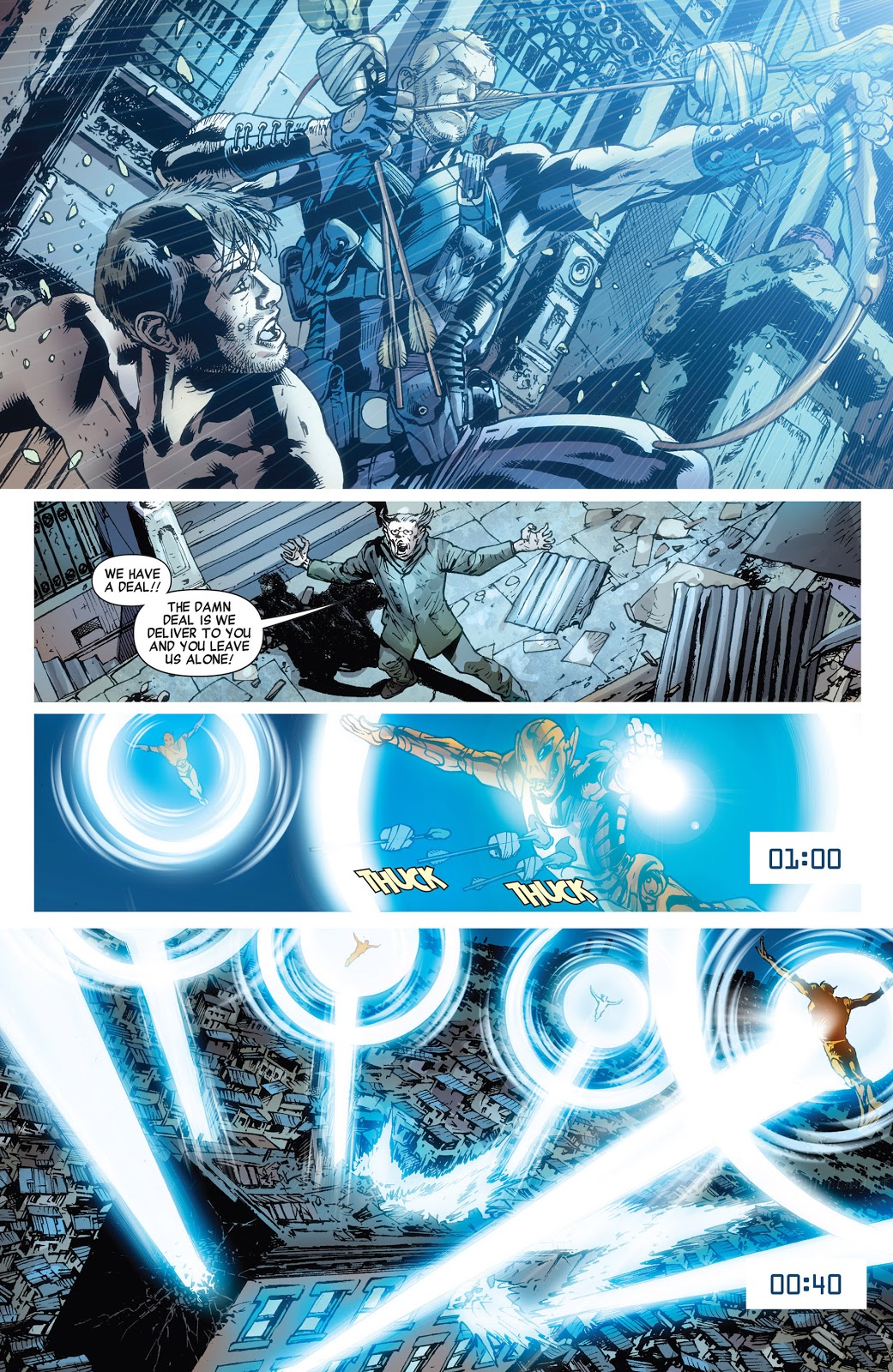 The brief précis is that artificial intelligence Ultron has redefined the world, subjugating humanity and applying a rule enforced by an army of him. Society is devastated, most heroes are captured or inactive, and those remaining at large are furtive, concealed and seemingly bereft of the means to fight back effectively.

This is hardly a new backdrop. Both X-Men: Days of Future Past and JSA: Stealing Thunder provide effective and enthralling explorations of the premise, and Age of Ultron matches neither.

Brian Michael Bendis makes a brave narrative choice by opening with the scenario already in place, and these early chapters of desperation against all hope are the best. Bryan Hitch illustrates them, opening with two double page spreads, the first depicting Manhattan enclosed within a strange hive-like structure, and the second looking within to a scene of devastation. From there pockets of heroes gather and unite in the Savage Land, a jungle area beneath Antarctica.

A raid on Ultron’s headquarters supplies information at a cost, and the choice made is to alter what’s occurred by using a time machine to prevent it happening in the first place. Here we arrive at the central moral dilemma. Unfolding decades of story continuity, it was superhero scientist Hank Pym that created the most primitive incarnation of Ultron, who thereafter reconstituted improved versions of himself. For Wolverine there’s a simple answer. If Hank Pym dies before he creates Ultron the problem is instantly rectified. Only it’s not as simple as that.

By this time the art has been entrusted to Brandon Peterson and Carlos Pacheco. Peterson makes an effort to emulate Hitch’s page breakdowns for the sake of consistency, while Pacheco’s scenes set in the past are laid out to resemble the John Buscema comics of that era. Assorted artists contribute to the concluding chapter, Hitch among them with pages slightly re-formatted from an Avengers story included to open the American edition of Age of Ultron, but absent from the UK equivalent. Its relevance is that a bickering group of the world’s smartest villains are manipulated into restoring Ultron, which then enables the remainder. It’s a tale that barely avoids slipping into ridicule.

Ultron’s name in the title and his cover prominence may engender an expectation that he appears within, which is hardly the case. Bendis supplied a masterful Ultron story to begin his run on the Avengers, so perhaps had little more to say about him, and indeed his presence in a later Avengers story was as an all-pervading background menace as here.

Too many anomalies, irritations and lapses of logic prevent this being a cohesive story. How is Ultron able to control the past from the future? There’s some technobabble that makes little sense. Why on Earth would the de-facto ruler of the planet knowingly permit the likes of the Owl and Hammerhead to run a shakedown racket? Given his resources, they can’t be that useful. There are several points in the past when Ultron could be effectively disabled, so why is killing Hank Pym, pivotal to Marvel’s history, in any way a good idea? Wolverine has displayed more sense in the past. And the final pages? Bah!

Hank Pym’s participation is restricted to scenes set in the past, and in a coda his past is given a charming run-though by Mark Waid and André Lima Araújo.

For those happier with the entire scenario there’s also Age of Ultron Companion, in which assorted stories set in this grim new world are collected. Some are better than the parent title. For the really ambitious there’s also Color Your Own Age of Ultron.