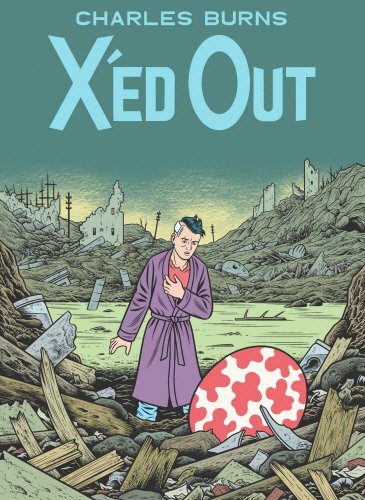 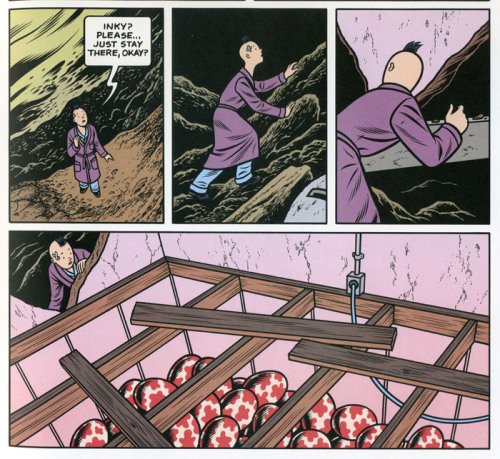 X’ed Out is the first volume of a trilogy completed by The Hive and Sugar Skull, which follow an adolescent negotiating a mystifying and grotesque world. It’s classic Charles Burns with fresh twists.

The initial hardback editions of all three volumes are beautiful, with illustrated end-papers and cloth spines to match the three hardback collections of his early shorts: Big Baby, El Borbah, and Skin Deep.

At first glance Burns’ art has the classic American comics style of brush-inked black lines, but it’s all composed and rendered with painstaking precision and elegance. The drawings are simultaneously realistic and diagrammatic. As this is Burns’ first sustained work not in black and white, he uses flat colours to complement the line work, and fit with the ‘classic comics only better’ look. You might not notice it as you read, but each two page spread seems to have it’s own colour scheme. There’s no colourist credit so presumably Burns handles it himself.

The story opens with Doug, a simply drawn character, who looks like an adolescent Tintin, with a sticking plaster on his head. He wakes up in a slightly more realistically drawn room. He follows his cat through a hole in the wall into a strange landscape. This recalls classic fantasy stories of entering a world through a looking glass or a wardrobe. It’s a more grotesque world we go into though, mixing sewer, wasteland, and archaeological dig. There’s an olive green stream and a foetus/toddler like creature floats past hanging onto a log. Still following his cat, Doug goes through a bar run by green creatures with heads like baby turtles, and into a Middle Eastern market with more grotesque and melancholy scenes.

Then we see a similar but more realistically drawn character wake up in the same room. The medical dressing on his head suggests, it’s the same character – an alternative version of the story. His journey is equally strange, yet more naturalistic, climbing a ladder into a party with performance art, punk rock, and pills, but there’s similar images and themes.

Typically Burns uses the bizarre, the uncomfortable and the grotesque to explore the alienation and confusion of adolescence. This takes in romantic longing; the struggle between self-confidence and self loathing; and the feeling of being an alienated outsider even amongst other alienated outsiders. Perhaps the ominous portal they both go through is into adulthood – there’s the shock of seeing the older generation as people too – with their hopes and disappointments; and the recurring spectre of your actions having consequences you’ll need to face up to.

It ends with a teaser for the next volume: “She’s so beautiful. Where are they going to take her?” “Right there in front of you… the hive“. If the hardcover presentation over three volumes proves too pricey, the entire story is collected in paperback as Last Look. 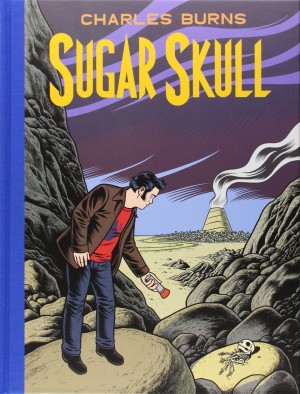