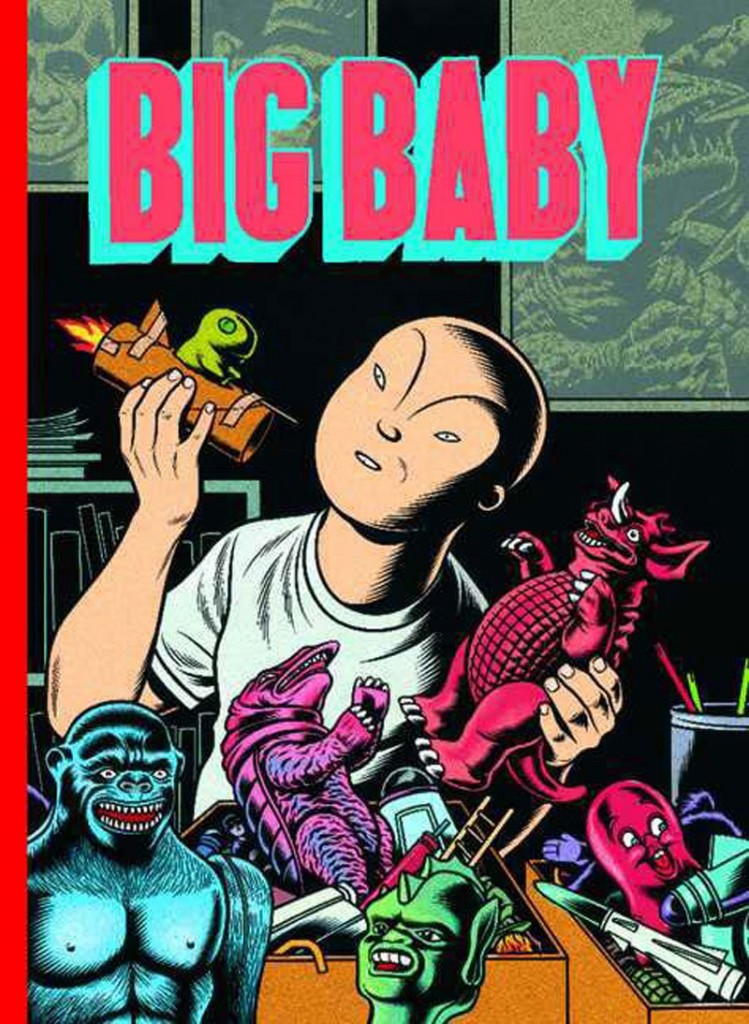 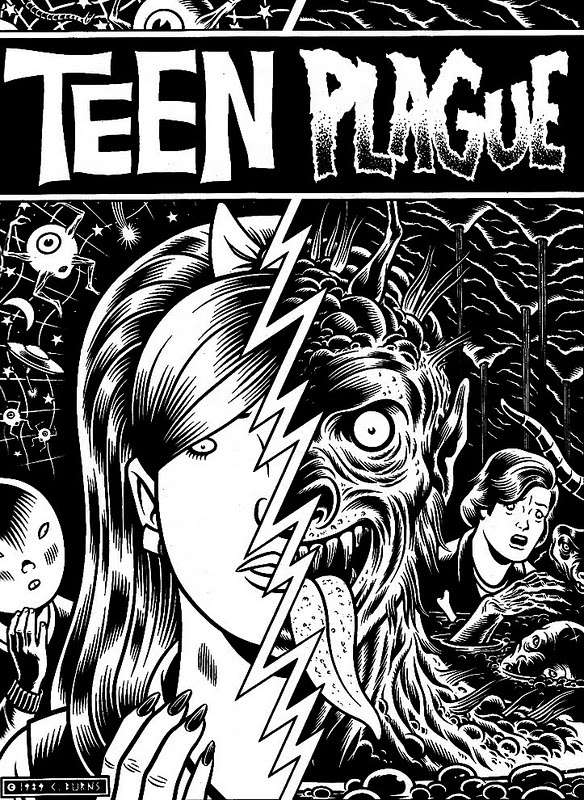 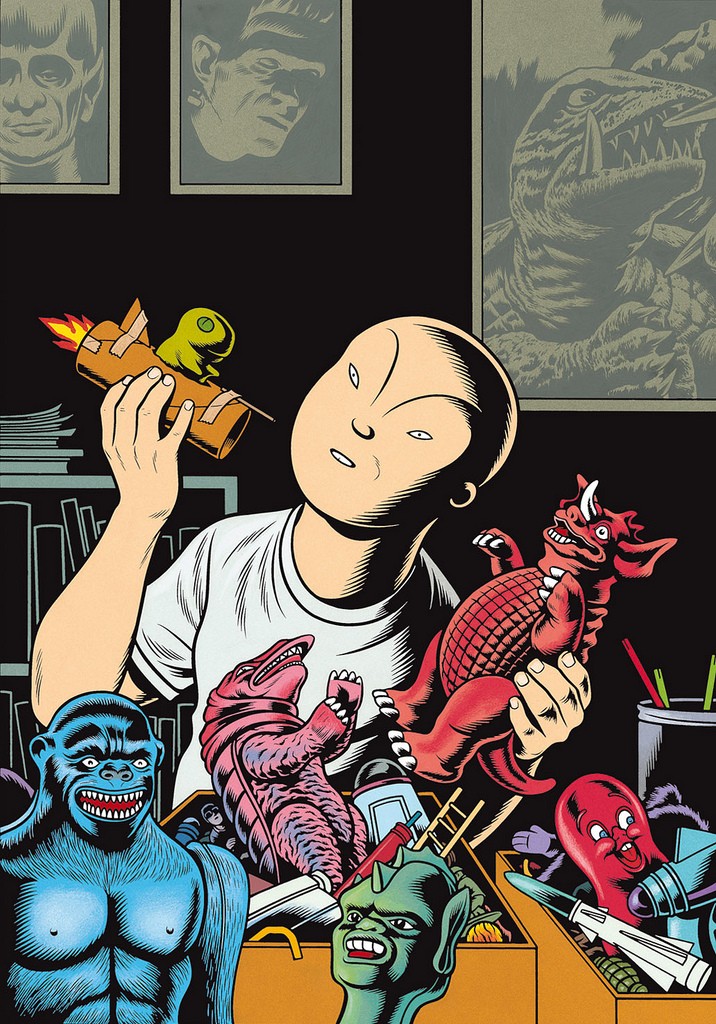 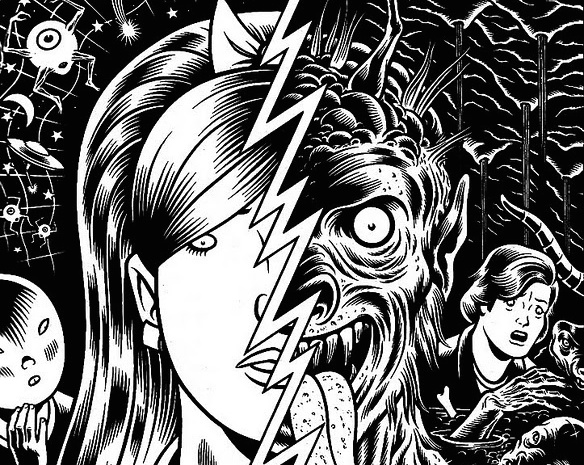 Big Baby gathers Charles Burns’ 1980s and 1990s stories featuring this character, Tony Delmonto, aka Big Baby, a kid with an imagination, in what looks like 1950s suburban USA. As teenage and adult life goes on around him, he tries to interpret what he sees, based on his limited life experience and the worlds of TV sci-fi and comics.

There are some of Burns earliest published works, but they’re amazingly accomplished, with the art as razor sharp and meticulously composed as his later work. His writing and art clearly refer to American comics of the mid 20th Century, although most of us can only guess whether there ever were comics quite as weird and wonderful as Burns’ versions.

In ‘Teen Plague’ Tony’s parents leave him with teenager Joyce babysitting. Her boyfriend Jeff is coming round, so she packs Tony off to bed where he reads an illicit monster comic. In this Kaballa-Bonga an alien eyeball with arms and legs lands on earth, kisses the pretty girl on the neck and sends her off to create an army of slaves with her kiss. Tony overhears fragments from the teenagers: Joyce has a mark on her neck and Jeff has a rash, and Tony becomes convinced that the comic is revealing what is really happening and only he knows about it. It may seem played for ironic laughs, but there are serious themes here about growing up, and ignorance and even fear of the worlds unfolding for these teenagers.

In ‘Curse of the Molemen’ the Pinkstons next door are having jealousy issues as a hole is dug for a pool: “I didn’t want a swimming pool in the first place… I prefer the beach”. “So you could parade in front of those… those muscle bound golden boys!“. The workmen joke to Tony that they are actually digging to look for monsters’ treasure. This and scary TV show Claws of the Molemen, prompt Tony to venture into the hole “to rescue the pretty girls”. He uncovers more strangeness and stumbles into the climax of the Pinkstons drama.

“Everybody knew that Rory Hanes was seeing a girl from Camp Pocahontas…“ In ‘Blood Camp’ the boys find some hidden magazines and Tony is accosted in the lake by the ghost of a dead child. It’s less lightened by pop culture references, and darker in story and artwork.

Burns’ distinctive style can disguise his range. He tunes the artwork for the particular story, even within this book it ranges from cartoony and almost diagrammatic in ‘Teen Plague’ to a dark gothic realism on ‘Blood Camp’.

When these stories were created this ironic reclaiming of older pop culture was fresh and innovative. In the following decades it has become commonplace – with ‘celebrities’  on TV reminiscing about toys and their growing up. This doesn’t diminish Burns’ work. He’s no charlatan lazily throwing around images: he has a deep knowledge of his source material and distils a lot into each story. ‘Teen Plague’ alone has not just monsters like Tony’s comic, but also romance, and ‘sci-fi’, with the suggestion of vampires too. What really elevates this work is Burns connection with the underlying themes and his ability to satisfyingly weave them into these multi-layered stories. Underneath the pop culture skin, the human stories go deep, and may seen even stranger for a new generation.

The Fantagraphics 2007 paperback contains some extra material – cover art from other editions and Burns’ thoughts on this work.