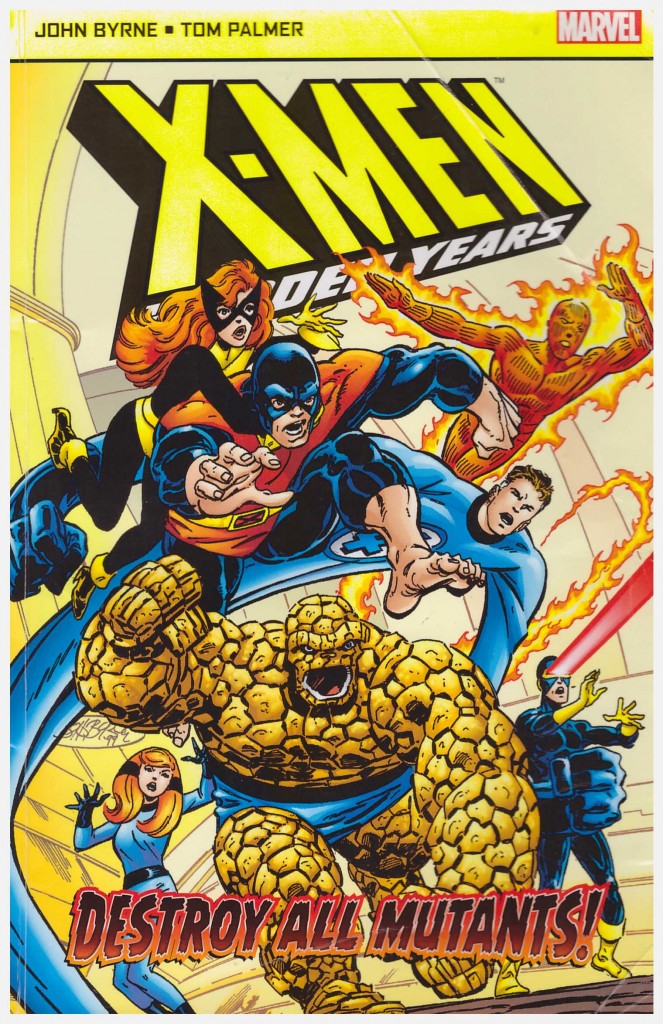 John Byrne’s continuity implant series spotlighting the X-Men as they were in the late 1960s continues with a second pocket sized collection drawing heavily on the stories comprising X-Men Masterworks volume 6.

In that material Professor X returned from seeming death to explain that he’d sequestered himself in solitude for months to prepare for the prodigious mental feat required to repel the predatory alien Z’Nox race from invading Earth. It now occurs that while Earth may be off the menu, the Z’Nox are free to imperil other planets. To rectify this some of the X-Men accompany the Fantastic Four (as they were in 1970) out into space.

For much of this volume, indeed most of the series, the X-Men are scattered and separated. The Angel starts alone, as does Iceman, but he eventually runs into Havok and Polaris in the Savage Land. Beast, Cyclops, and Marvel Girl shoot out into space with the Fantastic Four, before the latter two locate Angel, while Beast sets off with Professor X to investigate a new mutant and a Sentinel.

As with the previous volume, some compression of the stories would have been advisable. Byrne plotted for the long haul, and several elements continue from The Ghost and the Darkness, while others continue into Worlds Within Worlds. The constant scene shifting that juggling all these plots requires becomes repetitive, and leads to some odd time passages. In the time taken for Havok and Polaris to locate Iceman, a search begun in the previous volume, other X-Men have returned home from the Savage Land, headed off into space and back, and reunited with Angel on a boat Mid-Atlantic.

On the plus side, there’s a surprise for Jean Grey in space, Byrne enjoys himself mimicking the style Jack Kirby used to pencil late 1960s Fantastic Four issues, there’s some initially good use of a trio of old villains, and Angel’s girlfriend Candy Southern well characterised as a capable woman not at all over-awed by her boyfriend’s world and playing a vital role.

For the most part those who enjoyed the stories of the original X-Men will probably find this fun also, but it’s unlikely to have widespread appeal. Byrne deliberately wrote the stories in the plot-heavy style of the era he’s emulating, and there’s little depth of character.

Those who prefer the standard format can locate the same content spread over the two volumes of X-Men: The Hidden Years.