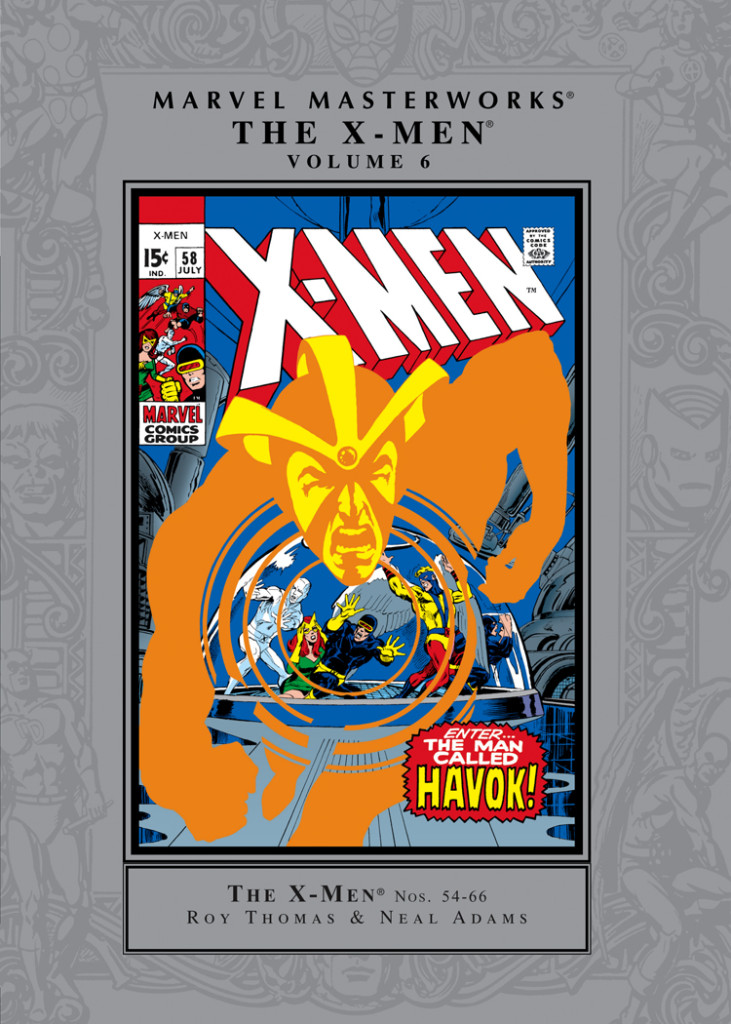 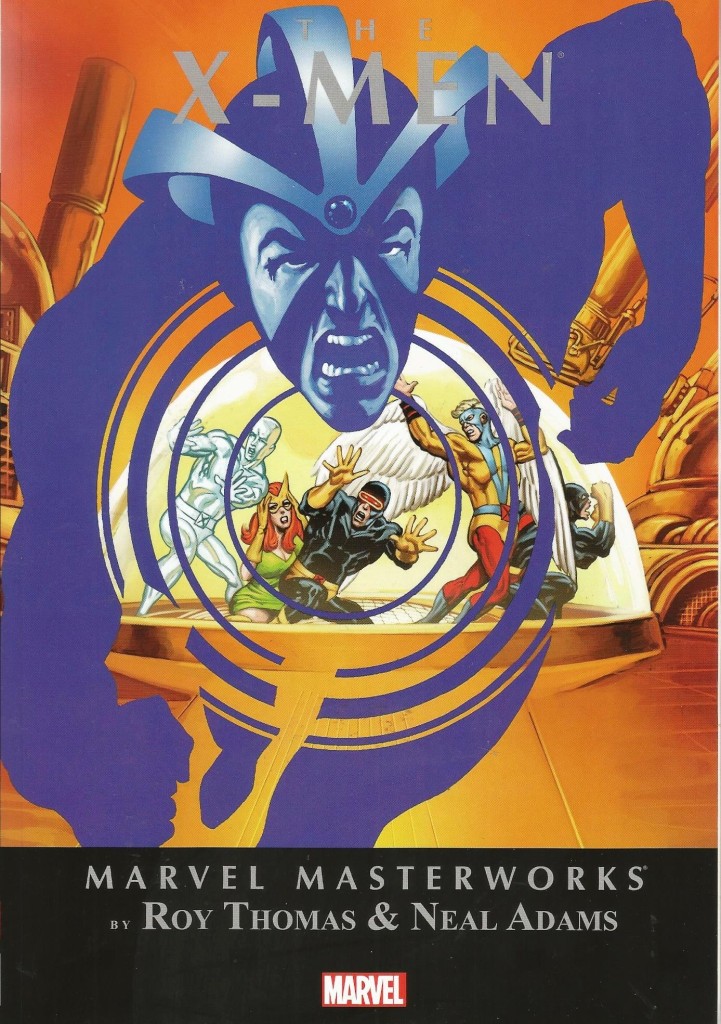 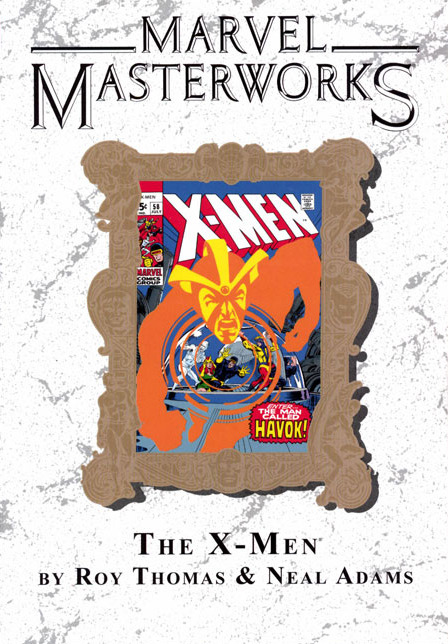 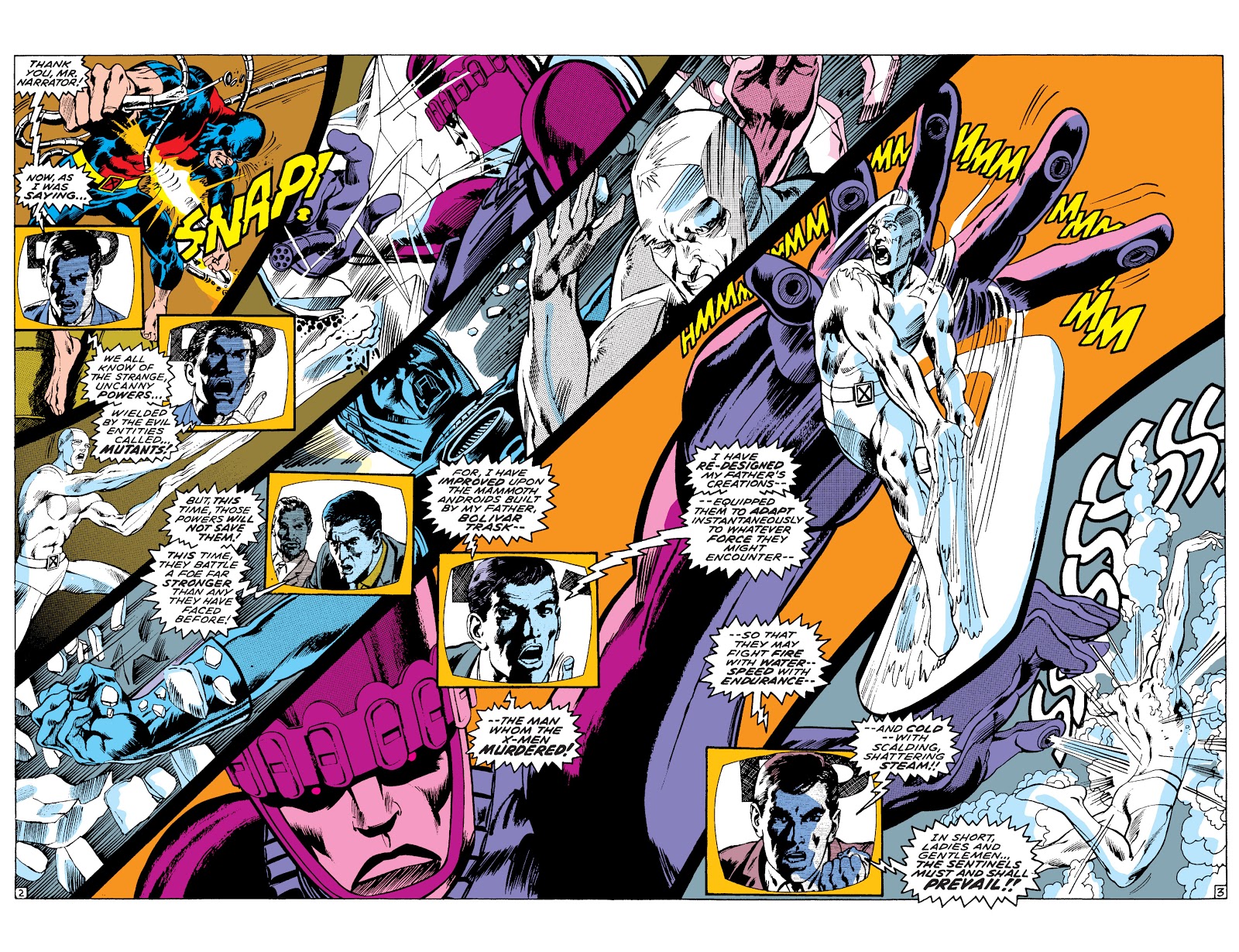 After a promising initial launch, then a long, slow decline with only the odd glimmer of creativity, X-Men by this time was at the point of cancellation. Arnold Drake departed the writing duties after the first issue in this volume, in which he introduced Alex Summers, younger brother of the X-Man known as Cyclops, and the villainous Living Pharaoh, both of whom we destined for bigger things.

In the case of the Pharaoh, much bigger; already a powerful mutant menace, returning scripter Roy Thomas had the Pharaoh and Alex Summers develop a co-dependent power base. Each empowered by cosmic rays, an inexplicable genetic fluke had the Pharaoh’s powers dwindle as Alex’s awakened – providing a prime motivation for the Pharaoh to sequester Alex away, in order to gain even greater power as the monstrous Living Monolith.

Midway through this tale, Neal Adams climbed aboard as regular artist, and what was a perfectly entertaining superhuman adventure became something much better. Much has been said about Adams’ highly-acclaimed work elsewhere, but there’s a vocal cadre who believe his run on X-Men is the finest that he, and the original X-Men, have ever been. Thomas claimed Adams expressed interest in drawing ‘Marvel style’ (plot, then art, then dialogue) and asked to be assigned Marvel’s worst selling superhero series. It was serendipitous.

Thomas was inspired by collaborating with Adams, and turned in broad and exciting tales without the verbosity and fanboy myopia encumbering his later works. The battle with the Monolith was followed  by the return of the Sentinels, mutant-hunting robots with, this time, true presence and menace as they scooped up the X-Men’s friends and foes alike in a seemingly unstoppable onslaught on the mutant race. Then the introduction of the psychic vampire Sauron, a rampage through the savage land with old friend Ka-Zar and old foe Magneto, and a climactic battle with a relentless alien invader, (the latter guest-written by Denny O’Neil) all beautifully depicted.

The ‘Origins of the X-Men’ backup strip which had trundled along amiably for a couple of years was phased out to make way for longer lead stories, though it didn’t depart without a final sexist slight. The men had each been given a multi-part serial; Marvel Girl? One five-page story in which she used her telekinesis to bake pies and do housework. Having it written by one of the vanishingly few female Marvel staffers at the time (Linda Fite) did not obscure the dismissive tone.

In the main story, things continued apace. Even a fill-in illustrated by Don Heck, introducing Sunfire, doesn’t jar, thanks to the skilful inking of Tom Palmer. With Lorna Dane and Alex Summers (the latter code-named Havok) joining the roster, and the return of a major character once thought deceased, the series was awakening to its potential.

Adams departed, and Sal Buscema, back when he was making an effort, drew the X-Men’s farewell fight, a battle with the Hulk which disappointed only by comparison with the extraordinary works preceding it. Sales figures had started to increase, but not in time to avert the decision to keep the title going as a cheap-to-produce reprint series, cannibalising its own history.

Bonuses include repros of original Adams and Heck artwork, colour guides by Adams, newly-drawn covers and intros from later reprints of the Thomas/Adams stories, and, most interestingly, Adams’ original cover for issue 56, with the X-Men literally imprisoned on the logo of their comic – rejected because it might obscure the logo on newsstands!