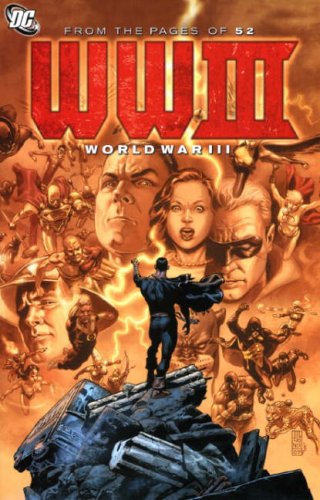 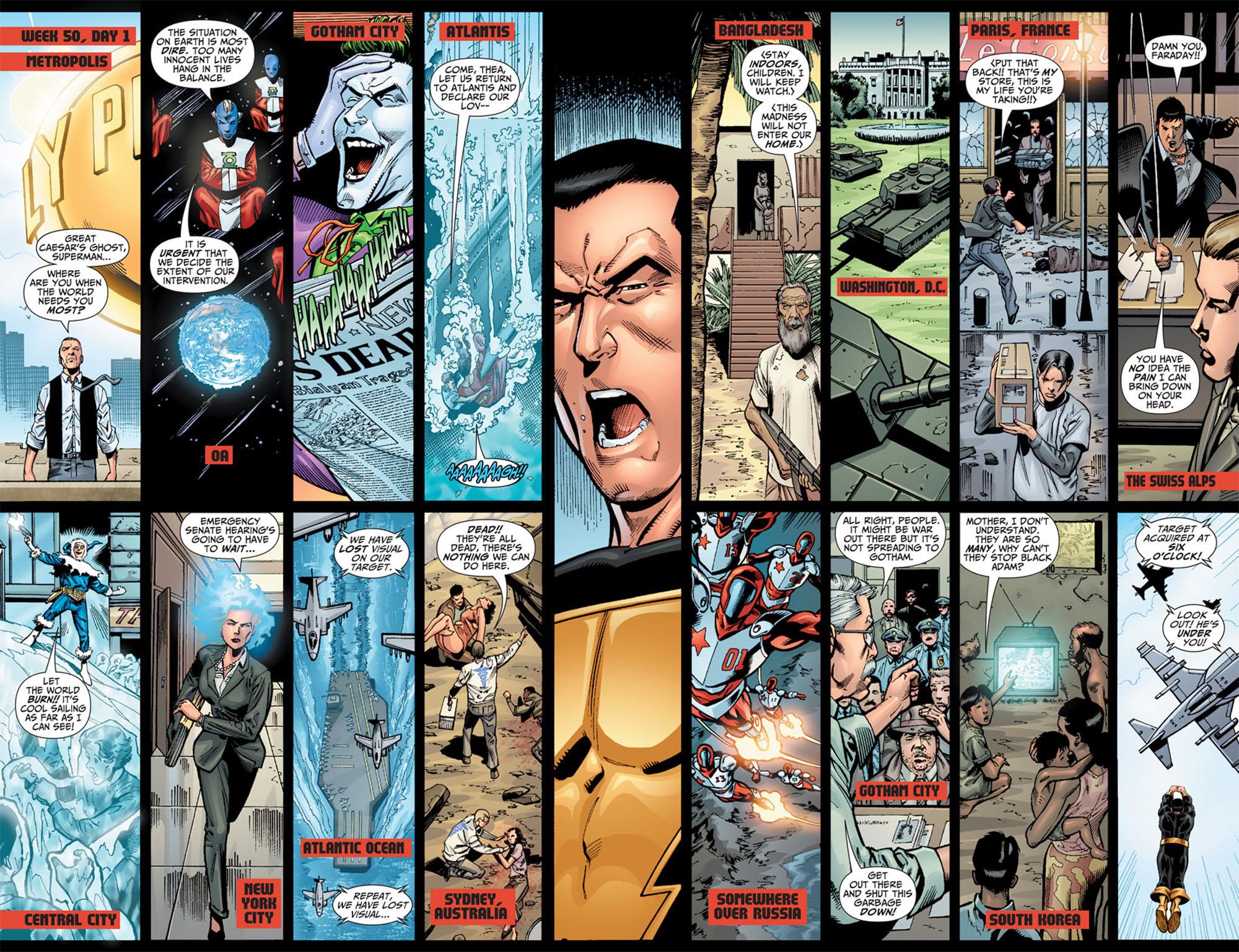 Infinite Crisis begat 52, which ran for 52 chapters, and chapter 50, reprinted here, concludes World War III. The central figure is Black Adam, endowed with his prodigious abilities by the same source as Captain Marvel, and a fascinating figure ever since Geoff Johns reintroduced him in JSA.

Each noble and arrogant, there are many parallels between Black Adam and Marvel’s Sub-Mariner. Both rule kingdoms, both consider themselves above the laws applying to mere mortals, both follow their own instincts, and both are beings of enormous power and considerable intelligence. Both also have pointy ears. For the full backstory to World War III you’re referred to 52. It’s worth it. The short, though, is that Black Adam found happiness, saw it pulled away from him by the manipulations of others, and took a jaw-droppingly terrible revenge.

While not caring much for Black Adam ruling the state of Kahndaq, nor his alliances, the super-powered community at large believed the best course was to leave him be. Such was the scale of his lashing out in vengeance, though, that it’s decided he must be brought to book. When you’re dealing with someone ranking among the top ten beings on the planet in terms of raw power, this is no easy task. The proof of it unfurls over the opening pages, when several characters who may be a match for Black Adam take their shot at bringing him down.

World War III also ties up a few plot threads from 52 not mentioned there. We see Firestorm back in action, for instance, and Supergirl also, and other one-time members of the Justice League are seen, most prominently the Martian Manhunter. He’s used as sort of superhero router, using his telepathic abilities to check in on other cast members.

The writing is split between Keith Champagne (opening two chapters) and John Ostrander. Both use the series as a house cleaning. Assorted superheroes largely surplus to requirement take on Adam, with the consequences horrific and often fatal. The explicitness of the violence depends on which of the four pencil artists is at work, but each delivers at least one shockingly brutal sequence. Ostrander is the superior writer, his dialogue possessing a greater authenticity. The conclusion displays different aspects of the same battle as the chapter titled ‘World War III’ derived from 52 volume four. This is pretty well every superhero on the planet against Black Adam in China. It’s curiously contracted, though, and seeing the same events twice in short succession doesn’t really work.

The best of the artists is Pat Olliffe on the opening chapter, with more considered layouts and detail that doesn’t overwhelm. Jack Jadson certainly puts in a shift for the conclusion, while Tom Derenick’s also good. The weakest is Andy Smith, okay on layouts, but featuring musclebound figures.

Unless you particularly care about the heavily featured Martian Manhunter, there’s not an awful lot to recommend this book now. It does the job, but is perfunctory rather than thrilling. Those wanting to follow up on Black Adam’s fate are directed to The Dark Age.