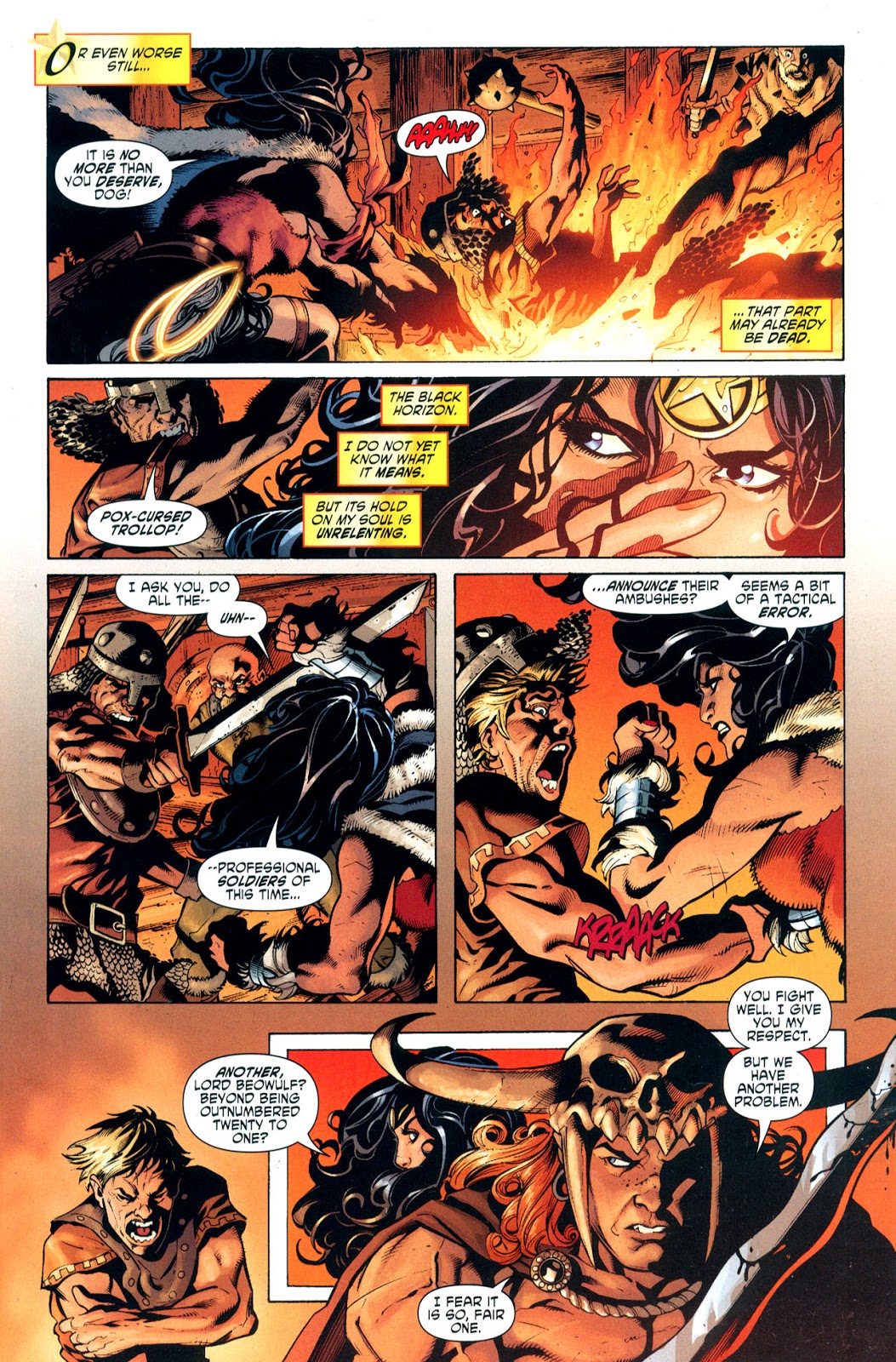 The Ends Of The Earth continues from The Circle, collecting Gail Simone’s mid-2000s run on Wonder Woman. There’s a different artistic team with Terry and Rachel Dodson replaced by penciller Aaron Lopresti inked by Matt Ryan, but it contains the same standard of bold, colourful artwork. The title story exhibits Lopresti’s talents across a variety of beautifully rendered mythic locales.

The book largely takes a break from the Greek Mythology-centred plots comprising most of the rest of the run, and instead focuses on a different kind of mythic tale. In ‘The Ends Of The Earth’, a mysterious man turns up in Diana’s office, and she must gather two other legendary warriors in order to save both the stranger and the piece of herself that he had taken from her. The three other heroes featured in this story – Stalker, Beowulf and Claw – are technically from the back catalogue of DC’s sword-and-sorcery heroes, but Simone claims them so well that it doesn’t matter whether or not you’re familiar with them.

Simone clearly loves the sword-and-sorcery genre – as anyone familiar with her more modern Red Sonja run will know – and she spins an exciting adventure tale that weaves in the grim threads of the barbarian and the occult. Stalker’s presence allows Simone to bring out a more tormented side to Diana in what feels like a practice run for the darker stories featured in later volumes.

The concluding two chapters tell their own story about Diana visiting the set of a film being made about her life. While the conclusion comes off as anti-climatic, and it features a slightly awkward PSA about alcoholism, there are enough laughs and cute moments that it’s a nice end to the trade, with some witty observations to be made about how women appear in adaptations of their own stories.

Peppered throughout the volume is the ongoing background noise of Diana’s second life as a spy and burgeoning relationship with Tresser, but in this volume in particular it feels oddly out of place. Tresser is sketched very loosely, and seems to exist tangential to the events that happen to Wonder Woman in the rest of the book. Even when the troubles occur where they both work, her confidante of choice is intelligence officer Etta Candy rather than her theoretical love interest.

The Ends Of The Earth stands relatively well on its own, and is worth a look both as its own uniquely saga-esque take on Wonder Woman and as a part of Simone’s run on the series – but all of the Tressler tangents mean that the volume is a little too unfocused to make the jump from “good addition to a series” to “objectively great standalone volume”. Simone’s run continues with Rise of the Olympian.