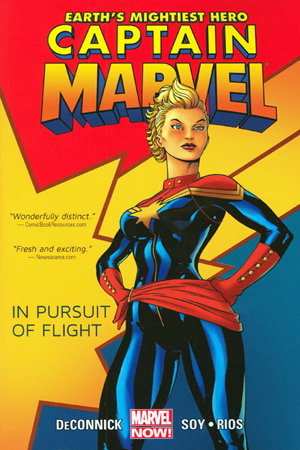 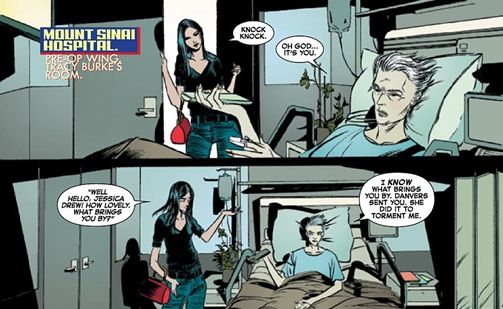 Under various costumes and identities, Carol Danvers has been one of Marvel’s premier female superheroes since the 1970s, though she hasn’t always had sympathetic writers. In 2012 she was relaunched with another new codename, taking on the mantle of Captain Marvel, in story terms because Captain America tells her she should. She acquires an attractive new outfit designed by Jamie McKelvie, which, unlike many of the costumes she wore in the past, wasn’t intended to expose as much of her thighs as possible. She also came into the hands of writer Kelly Sue DeConnick, who certainly is sympathetic.

This series of Captain Marvel takes the female superhero seriously, and she is presented as every bit the equivalent of any male hero kicking around. DeConnick has a fine ear for Carol Danvers’ voice, and imbues the character with a clearly-defined personality. She explores Carol’s insecurities well, about taking the role of Captain Marvel, about being an Avenger, about the responsibility of being a superhero. She also gives her a sense of humour – she’s not wise-cracking all the time, but neither is she staid. The characterization is the most attractive part of these comics, and makes them an enjoyable read.

Nevertheless, these early stories are a bit tentative. The problem is DeConnick hasn’t quite decided on the stories she wants to tell. This time-travelling story involving Carol’s hero/mentor/friend, takes Captain Marvel to the 1940s, the 1960s, and to the time she gained her powers. It’s a bit muddled, and even several reads don’t entirely clarify what’s actually going on. Moreover, a good comic needs a good supporting cast. That cast starts to be built here, including Carol’s long-time superhero friend Jessica Drew/Spider-Woman, and there are some fine scenes with Carol, Jessica, and Carol’s former journalist colleague. But the cast isn’t yet fully in place.

It further doesn’t help that the art isn’t brilliant. Dexter Soy’s work is a step away from standard superhero work in a sub-Sienkewicz fashion, but it’s not always clear what action is actually taking place on the page. Emma Rios draws in an unattractive underground style unsuited to the material, having particular problems with action scenes.

These are good, competent comics, but they don’t show DeConnick’s Captain Marvel quite as the excellent series it would soon become. Readers might be advised to skip on to the next volume, Down, when DeConnick much more firmly starts to hit her stride.