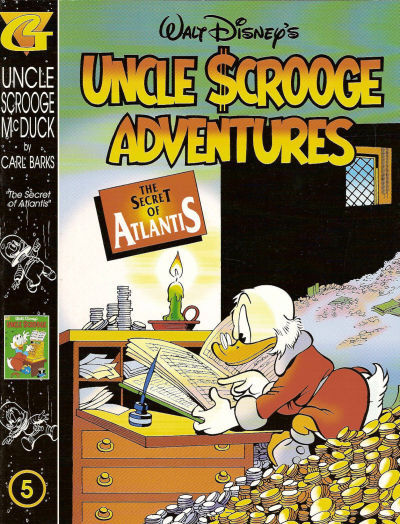 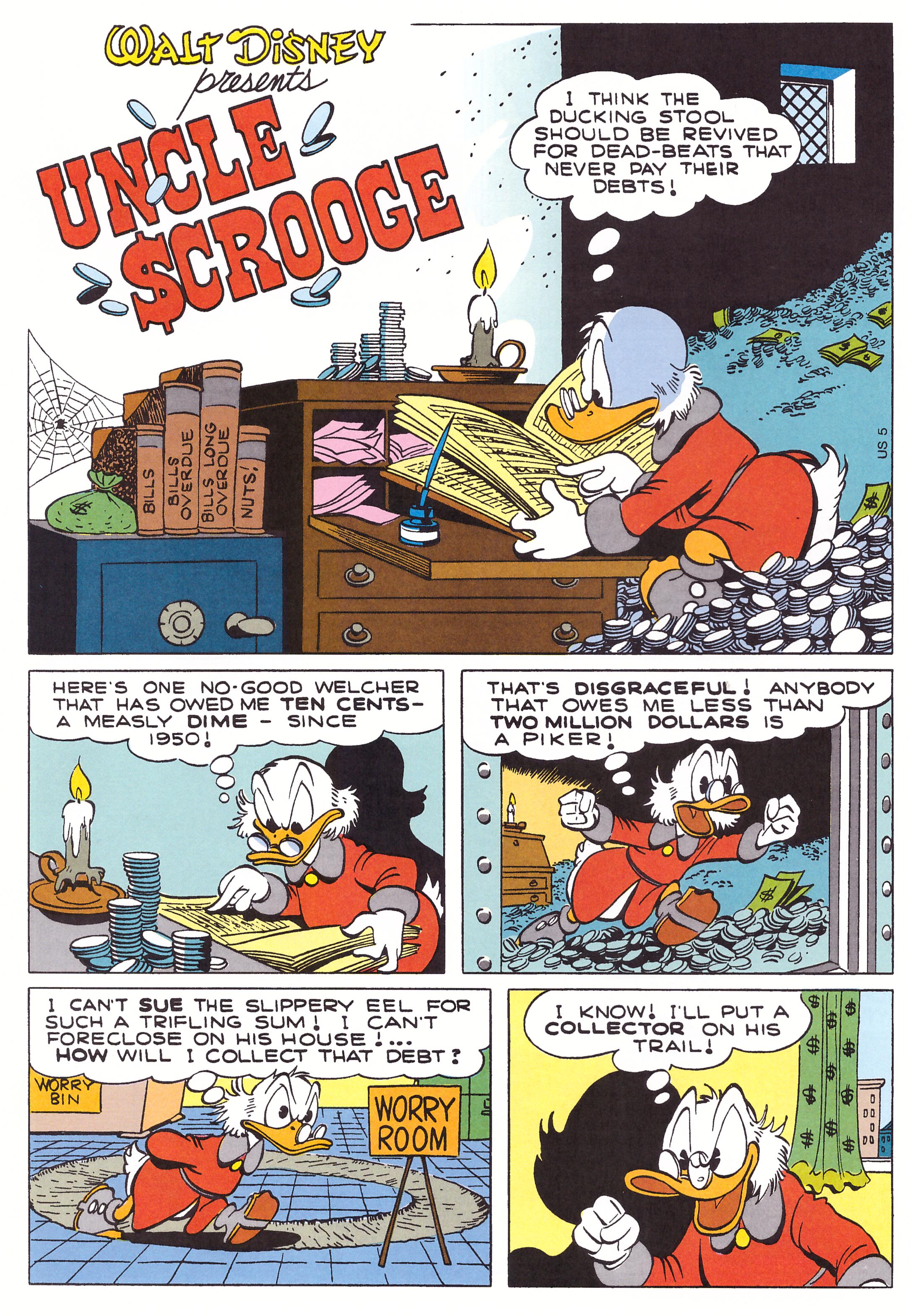 Of all the early full length Uncle Scrooge solo stories ‘The Secret of Atlantis’ (also known as ‘The Sunken City’) is the most disjointed and capricious, which isn’t to say it’s bad. It has the feel of a tale plotted on the fly, perhaps starting life as something intended as ten pages for Carl Barks’ Walt Disney’s Comics & Stories work, as the opening sequence is a tidy gag-packed romp that sets up the remainder, but is also separate from it. Scrooge and his nephews discover the sunken city of Atlantis, but before then we have an old fashioned silent comedy fight in a pie factory, a sequence that appears to be one of Barks’ morality tales of greed and its consequences and a good gag opening with Donald Duck.

The plot is set in motion by Scrooge attempting to create an artificial value for a 1916 dime. His reasoning is that if he buys up every other 1916 dime at double their worth, then destroys the remainder, the single coin he retains will have a value far greater than the sum paid for all the coins he’s destroyed. In the final pages, at the point when everyone had surely forgotten that aspect of the discursive plot, Barks heads back there with a good pay-off. He noted in interviews that a story’s conclusion is what first came to him, and this is surely one of those occasions.

Before we reach the finale Atlantis has been visited, and it continues the theme introduced in the previous ‘Menehune Mystery’, that of the eccentric civilisation unknown to mankind. For all the silliness of the meeting, Barks would refine the idea, and the next volume’s ‘Tralla-La’ is a far better exploration of that and other ideas found here. One interesting aspect is the then fifty year old creator showing people embracing youth music without the humbuggery he brought to the topic on other occasions.

Barks was in particularly whimsical illustrative mode as well. An early page has a thought balloon of Donald considering if Scrooge is senile, while balancing on one leg on a bridge rail over a river as he does so. Other memorable images feature wrestling squids and Scrooge bathing in coins. His Atlantis is rather a visual hotch potch compared with the meticulously researched architecture and landscapes Barks usually produced, but it’s not as if there was any obvious reference.

None of Barks’ 1950s work is coasting, and there’s a lot to admire within ‘The Secret of Atlantis’, but it lacks the cohesion of his best stories. However, he is adding to the mythology that will later prompt story material as this is the first time Huey, Dewey and Louis consult the Junior Woodchuck Guidebook, here referred to as “the book of knowledge”.

It’s possible to locate this as an individual album, along with free trading card, but the story is now better purchased along with several others in the 21st century Fantagraphics collection Only a Poor Old Man. There it’s contextualised and that volume is available at roughly the price this slim album now fetches.