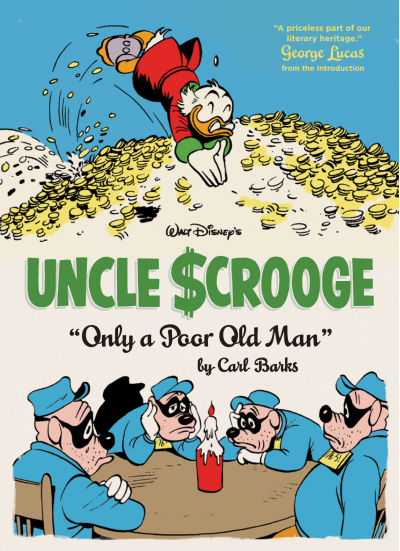 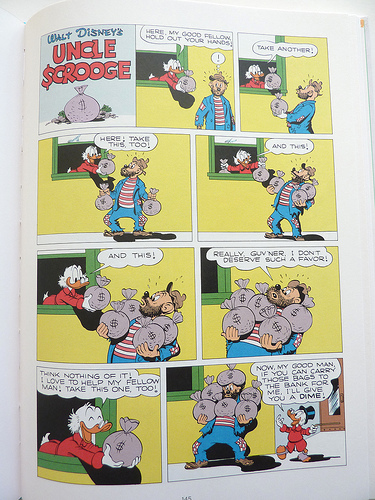 It’s not every creator’s work that can splash George Lucas across the cover claiming that it’s “a priceless part of our literary heritage”. It’s no exaggeration. Little Lulu deserves more than a cursory mention, but the pinnacle of American children’s comics is the exceptional work of Carl Barks on Uncle Scrooge. Such is the complexity, skill and attention to detail that the best of Barks’ Scrooge stories match the best of Asterix or Tintin. Yet while that’s widely conceded across Europe, where his albums are considered timeless and continue to be available at station newsstands, for over fifty years now Barks’ work has been restricted to the collectors market in the USA.

This wonderful compilation encompasses the first six long form Uncle Scrooge stories created by Barks for publication between 1952 and 1954. Four are gems, and the others only sag by Barks’ own high standards. By the time of the first, this collection’s title story, Barks had been working on Disney duck comics for fifteen years, progressing from someone whose animation background was obvious into a master storyteller. He’d introduced Scrooge five years previously as a cantankerous and miserly rich Uncle of Donald Duck, mellowing him slightly when used again, but retaining those essential characteristics. They’re combined with a fearsome work ethic, prodigious perseverance, a love of exploration, particularly if the objective will add to his fortune, and wholesome sense of justice.

For greater detail on the longer stories see individual reviews of earlier editions. All but one can be grouped under themes Barks employed repeatedly through his Uncle Scrooge material, varying the situations to ensure the only repetition was the genre. ‘Only a Poor Old Man’ and ‘The Menehune Mystery’ concern attempts to prevent the Beagle Boys stealing Scrooge’s money, which he keeps in cash in an enormous money bin. ‘The Secret of Atlantis’ and ‘Tralla-La’ are exotic travelogues, and ‘The Horse Radish Treasure’ a dangerous trip required to keep his fortune. ‘Back to the Klondike’ is an anomaly, and one of Barks’ most fondly remembered stories. It’s the only time Barks delves back into Scrooge’s past beyond the odd mention, supplying the foundation of Scrooge’s fortune as gold mining in Alaska, and counterpointing that with what Scrooge sacrificed. It may have been intended for children, but it’s still a heart-rending gem.

The remainder of the book is populated with the single page gag strips and shorter back-up material that filled out every Uncle Scrooge comic. Barks put as much effort into these as he poured into the longer material, and everything still raises a smile. ‘Somethin’ Fishy Here’ starts with Scrooge, too tight to buy a newspaper, locating a discarded one Donald Duck has faked. The headline announces currency has been replaced by fish. After an initial shock Scrooge gets to work, trading for ever larger amounts of fish until the realisation hits that storing them will be a problem. Having restored his fortune, the fun dissipates, and Barks works out a neat finale that pays back Donald for his trickery.

Lucas’ introduction is actually reprinted from the 1981 compilation Uncle Scrooge: His Life and Times, where four of the longer stories can be located, albeit poorly coloured. Alternatively everything’s available over the course of Gladstone’s Uncle Scrooge Adventures albums. The considered presentation, easy availability and accompanying material, though, make this hardcover the superior format. Barks still resonates with younger readers if they’re exposed to his work, so buy a copy for your shelf and one for the kids. You’ll be rewarded with hours of silence. This is timeless all-ages magic. The series continues with The Seven Cities of Gold. 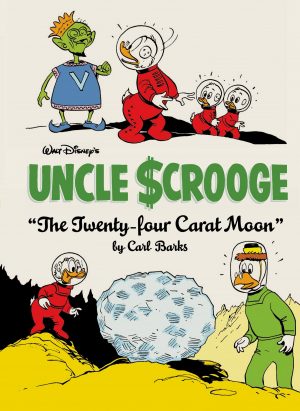