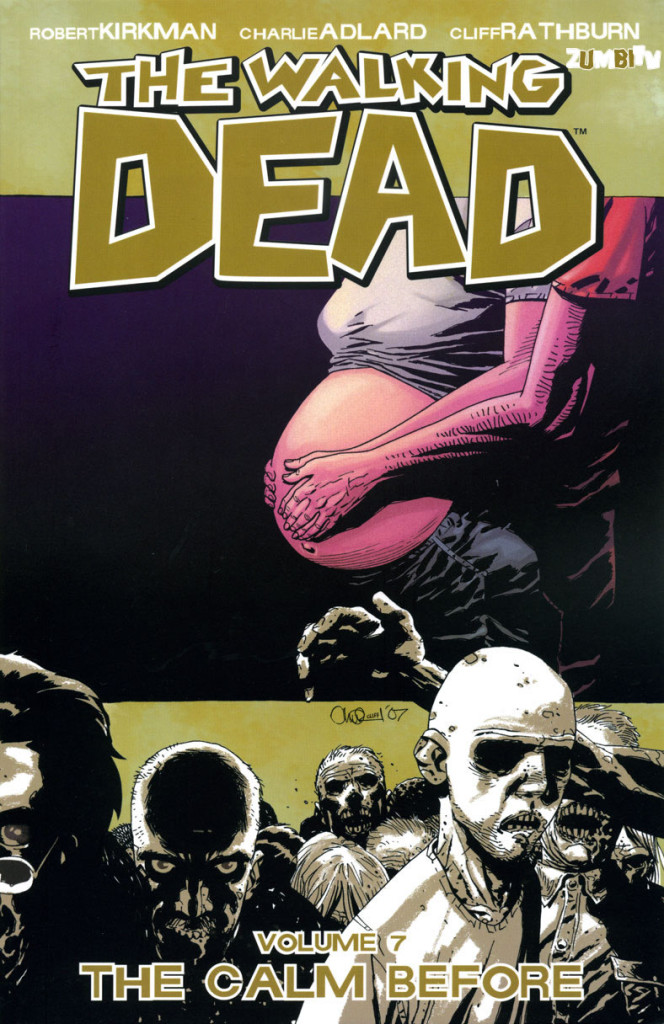 Is there an element of predictability about The Walking Dead, or is it just that Robert Kirkman is so good at fostering continual tension that when the trouble comes the initial response is “I knew it”? Perhaps he just uses subliminal trickery such as titling this volume The Calm Before.

When we left our cast at the end of This Sorrowful Life, some members had endured a pretty torrid time of it, although, to be fair, that’s a statement that could probably be applied to any book in the series. This is pretty well a ‘does what it says on the tin’ book. Kirkman’s strength has always been the character interaction under terrifying circumstances, and, for a while at least, the circumstances have become a little less terrifying. There’s very little zombie action here, with two very telling exceptions. One of them Kirkman uses to dispose of a cast member he’s not managed to portray very convincingly, underlining this by a piece of dialogue referring to stress excusing eccentric conduct: “There’s no guidelines for behaviour in this situation – everything is unknown.”

Elsewhere this has it all: birth, death and marriage, along with the first hope that someone might be able to survive zombie infection. Yet hanging over everything is the less than welcoming community of Woodbury. Michonne’s not been forthcoming about how she left, and they hardly seemed the types to leave well enough alone. An early excursion has the purpose of discovering the National Guard base from which they’ve been acquiring supplies.

Book in, book out Charlie Adlard continues to deliver storytelling clarity over a wide cast whose interaction incorporates considerable requirement for talking heads sequences. He breaks down the events so well, though, that this never becomes dull.

The material here is combined with the next book Made to Suffer for the hardback The Walking Dead Book Four, and with that and the previous six for the massive Walking Dead Compendium. It’s also available with the following two books as the limited edition Walking Dead Deluxe Hardcover.