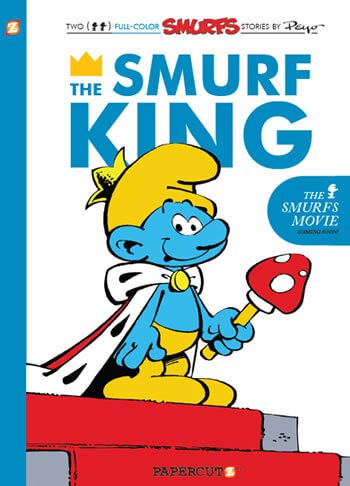 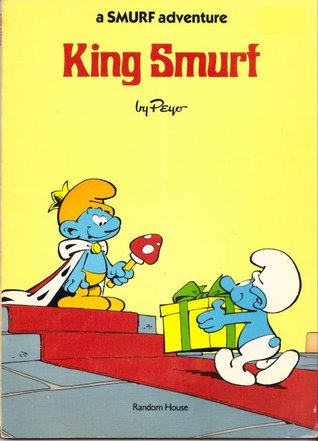 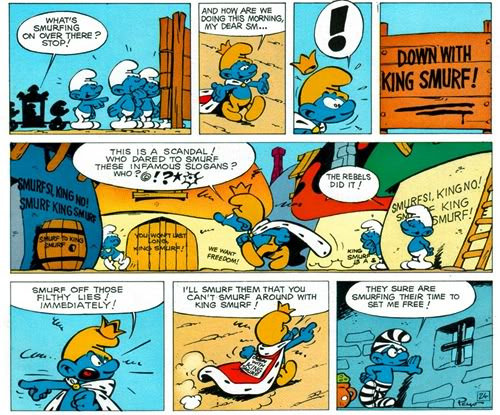 While third in the series, this book actually presents the fourth and fifth Smurfs solo stories, before Peyo had fully committed to album length adventures, and from the days when the Smurfs featured commentary about society in general.

It was written for serialisation in 1964, and intended to satirise Hitler’s rise to power in the 1930s, yet Belgian authors Peyo and Yvan Delporte’s script for the title story features some jaw-dropping parallels with present day USA. Papa Smurf leaves the village to acquire some more euphorbium for one of his potions. Unable to agree on how to spend their time, the Smurfs decide they need a leader to guide them. Brainy Smurf rapidly alienates everyone with his arrogant assumption that it should be him as Papa Smurf has always said he’s the smartest, and a first vote leads to every Smurf voting for themself. A never named Smurf is more ambitious, and by a combination of flattery, manipulation, promises and helping with work persuades the remainder of the community to vote for him. Once in power, however, he’s not so pleasant or obliging.

Peyo’s illustrations are so delightful that they draw the attention away from what an astute political satire ‘The Smurf King’ is. More so than Hitler, it’s extraordinarily difficult to avoid seeing Donald Trump as the Smurf King. He adorns himself with gold, loves the feeling of authority, disdains anyone who questions him, and transforms the Smurf village into an isolated fiefdom. Oh yes, there’s also the small matter of the protective wall… It’s uncanny. Lesser elements that also resonate include calls for abdication, plans that don’t work due to incompetent consideration and an absolute certainty of his own opinions.

Delporte and Peyo may have been making a few points, but their primary objective was to produce a gag-packed adventure, and on this level ‘The Smurf King’ is an unqualified success, beautifully choreographed and Peyo’s busy cartooning a delight. It closes with a great comment on the fate of those who seek power.

After the shock of the title story ‘The Smurfony’ features Gargamel, the evil sorcerer last seen in the opening collection. This is more standard slapstick material with the trumpet playing Smurf not competent enough to play in the Smurfs orchestra and tricked by Gargamel into being the instrument of his revenge. Chase scenes occupy a third of the story and as delightful as the cartooning is, it can’t work magic on an ordinary plot. Although he and his cat would return, the Smurfs work best in their enclosed world without human intrusion.

Don’t concern yourself with the back-up strip. ‘The Smurf King’ was excellent when first published, and today it’s essential, worth the price of the book alone. It can also be found along with the previous two Papercutz collections in the first Smurfs Anthology. While there’s no real order to the series, the next to be published was The Smurfette.