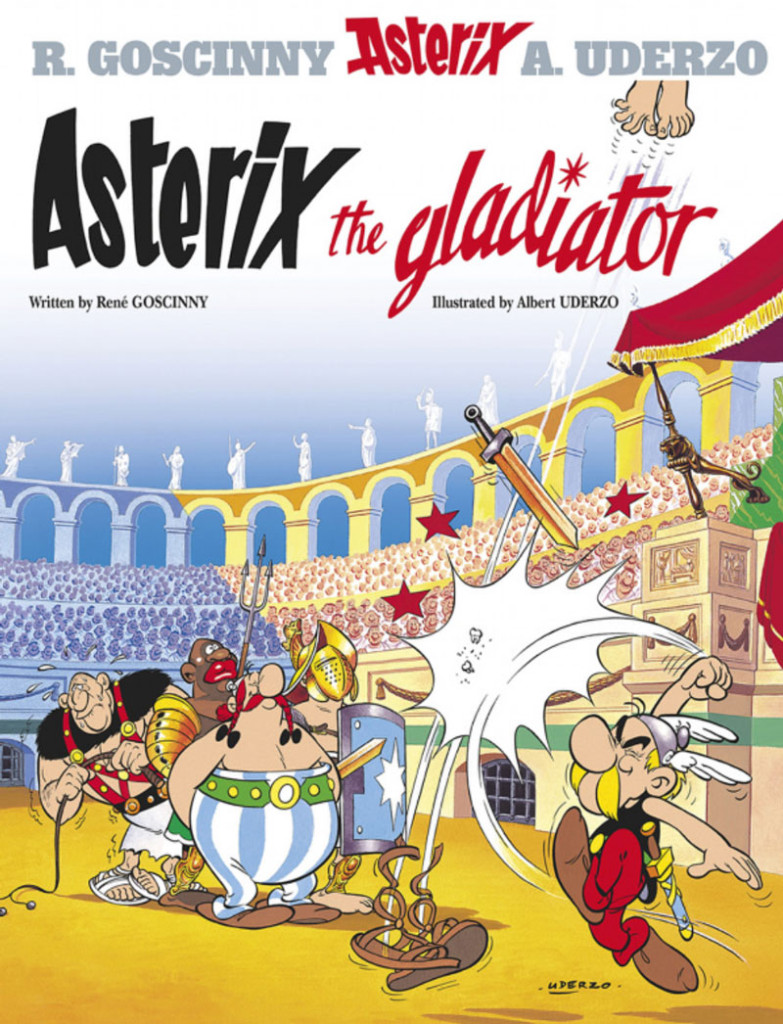 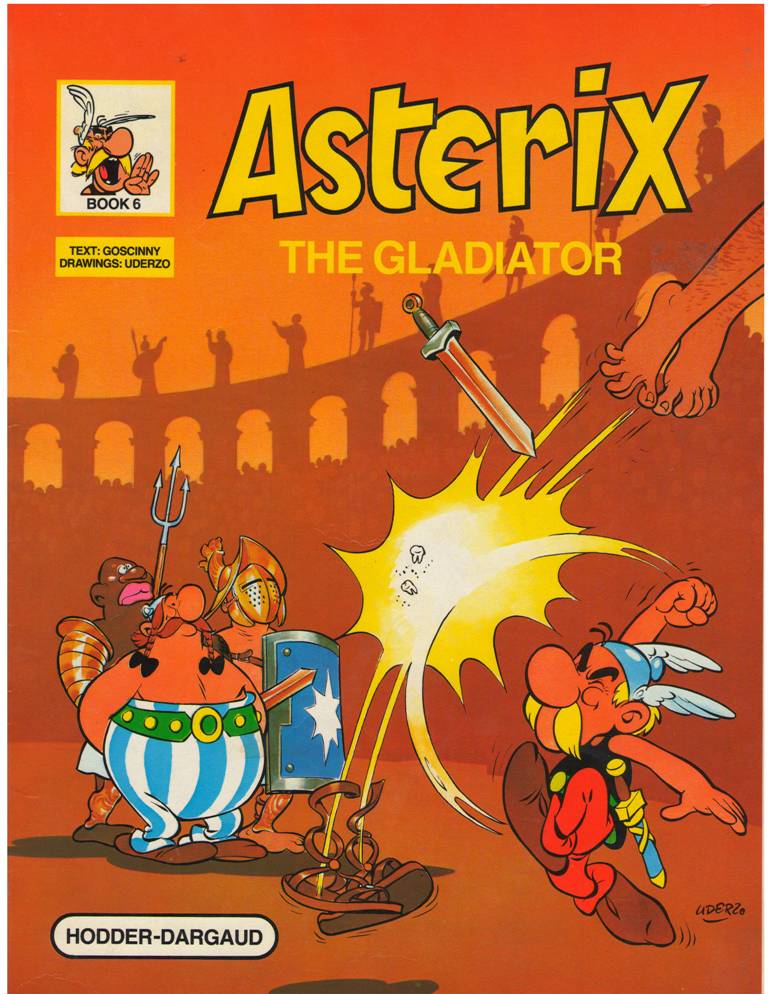 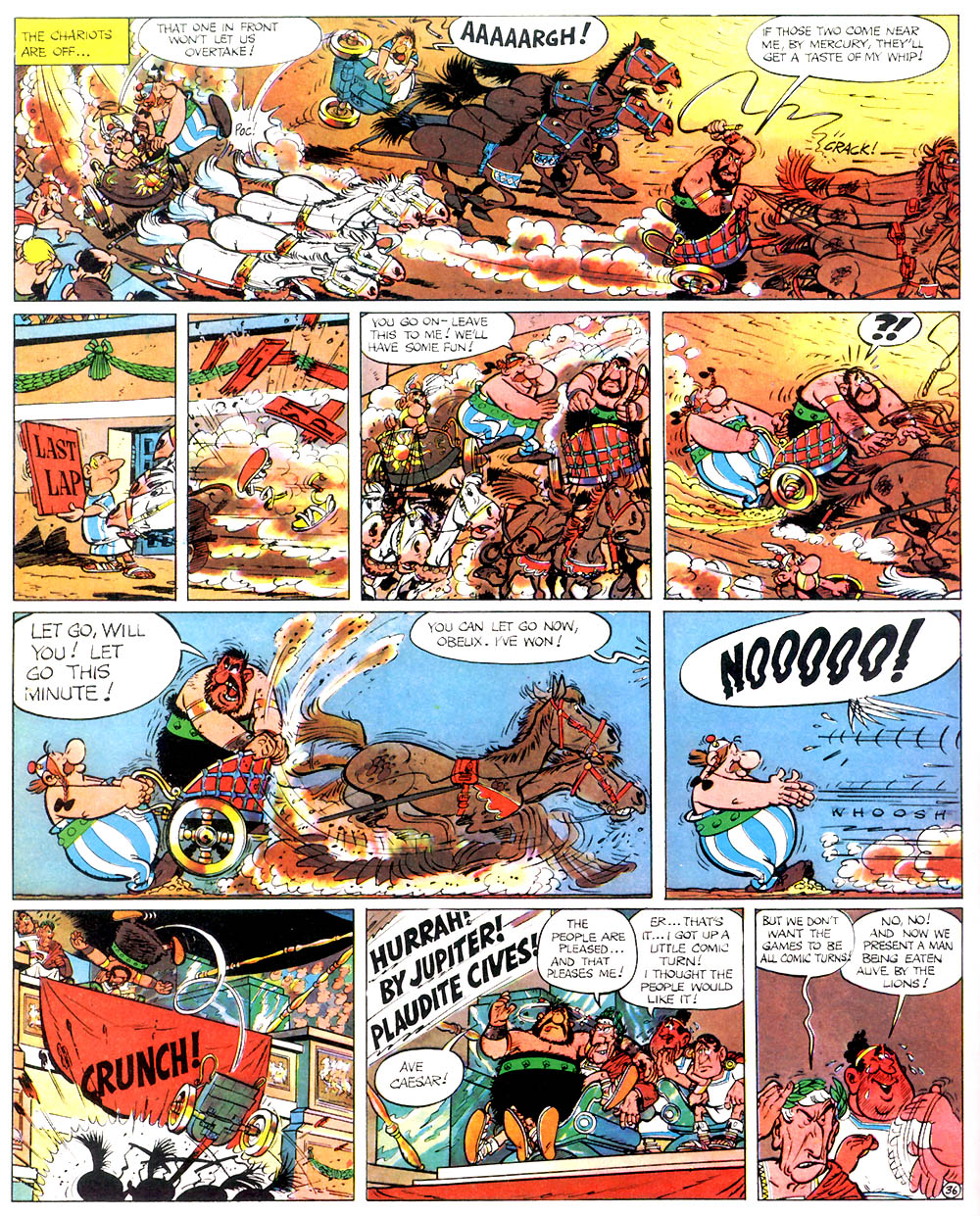 The current Prefect of Gaul, Odius Asparagus, is going on leave to Rome and custom dictates that he present Julius Caesar with a gift. What could be more original than presenting venerable Caesar with a Gaul straight from the indomitable village of Gauls so much the thorn in his side? Well, the Gaulish village won’t be having any of that, even if it is only Cacofonix the Bard the Romans have kidnapped. He might be a lousy bard, but he is their lousy bard. So it’s off to Rome with Asterix and Obelix, to rescue their friend, take in the sights, taste the local food, and become gladiators in the circus before Cacofonix brings the house down. Literally.

Asterix the Gladiator was originally serialised in French magazine Pilote in 1962 before being collected  in 1964. At this point René Goscinny’s writing was still developing, meandering through plot developments and dialogue that is funny, but not always entirely necessary. It is still hilarious, but not as consistently as when Asterix was at its peak. Artistically the difference is also visible, the Gauls lacking their more familiar rounded profiles. Albert Uderzo is just beginning to experiment with more characters in a frame, so those epic battle scenes so gloriously depicted in later volumes are not at their zenith. The protagonists and antagonists alike are very uniform, the familiar figures of blacksmith Fulliautomatix and fishmonger Unhygenix also absent from the fray.

Although this is technically the fourth book in the series, it could be seen as a book of firsts. Among the first appearances are the quite relevantly named Phoenician merchant Ekonomikrisis, the unlucky pirate crew who become a regular feature, the introduction of an as-yet unnamed Geriatrix, the origin of Obelix’s helmet collecting, and also the first time Obelix uses his custom trademark phrase of “These Romans are crazy!” As far as its satire of other countries and ethnic groups go, this reflects more of the French attitudes at the time, some of the portrayals of Arabs and Africans grossly stereotyped. Translators Anthea Bell and Derek Hockridge deserve a mention if only because their naming of Cacofonix’s “greatest hits”, like the magnificent ‘Roman in the Gloamin’ and the genteel ‘Love is a Menhir Splendid Thing’ among others, is a stroke of genius.

Asterix the Gladiator is still far from the standard of some of Goscinny and Uderzo’s later work, but by more general standards it’s very good and remains a favourite. It would later be blended with elements of Asterix the Legionary for animated feature Asterix versus Caesar. An interesting but irrelevant fact is that France’s very own Asterix theme park (Parc Asterix) would open almost exactly 20 years after this book’s translation into English, a sort of monument to the lasting legacy of the indomitable little Gaul and his creators.

The next adventure is Asterix and the Banquet.