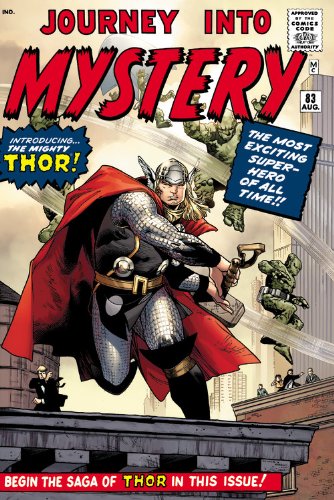 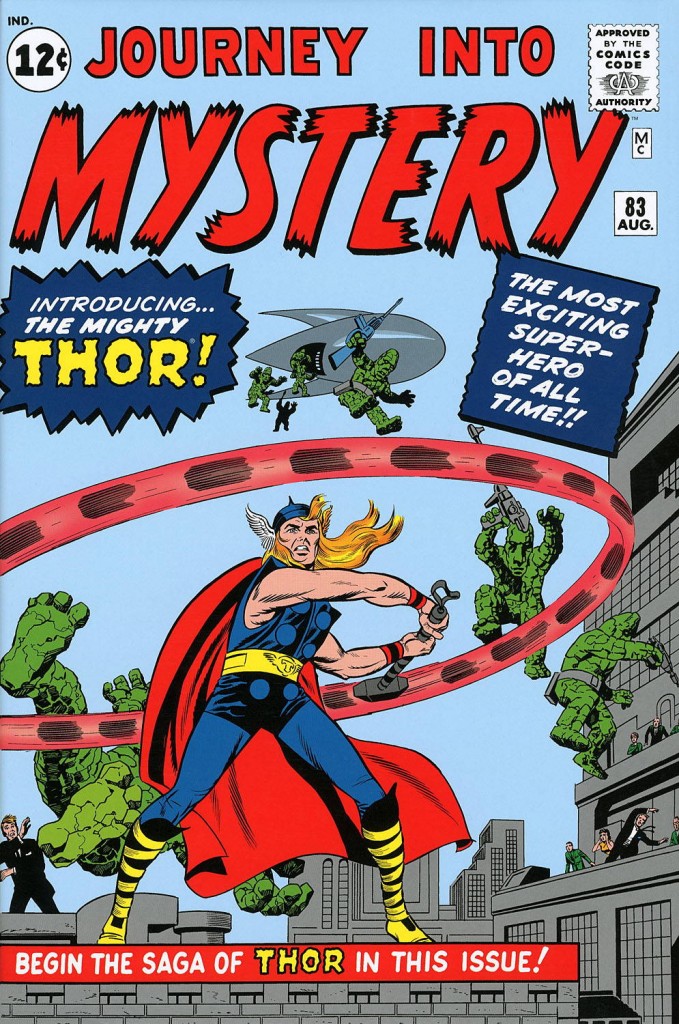 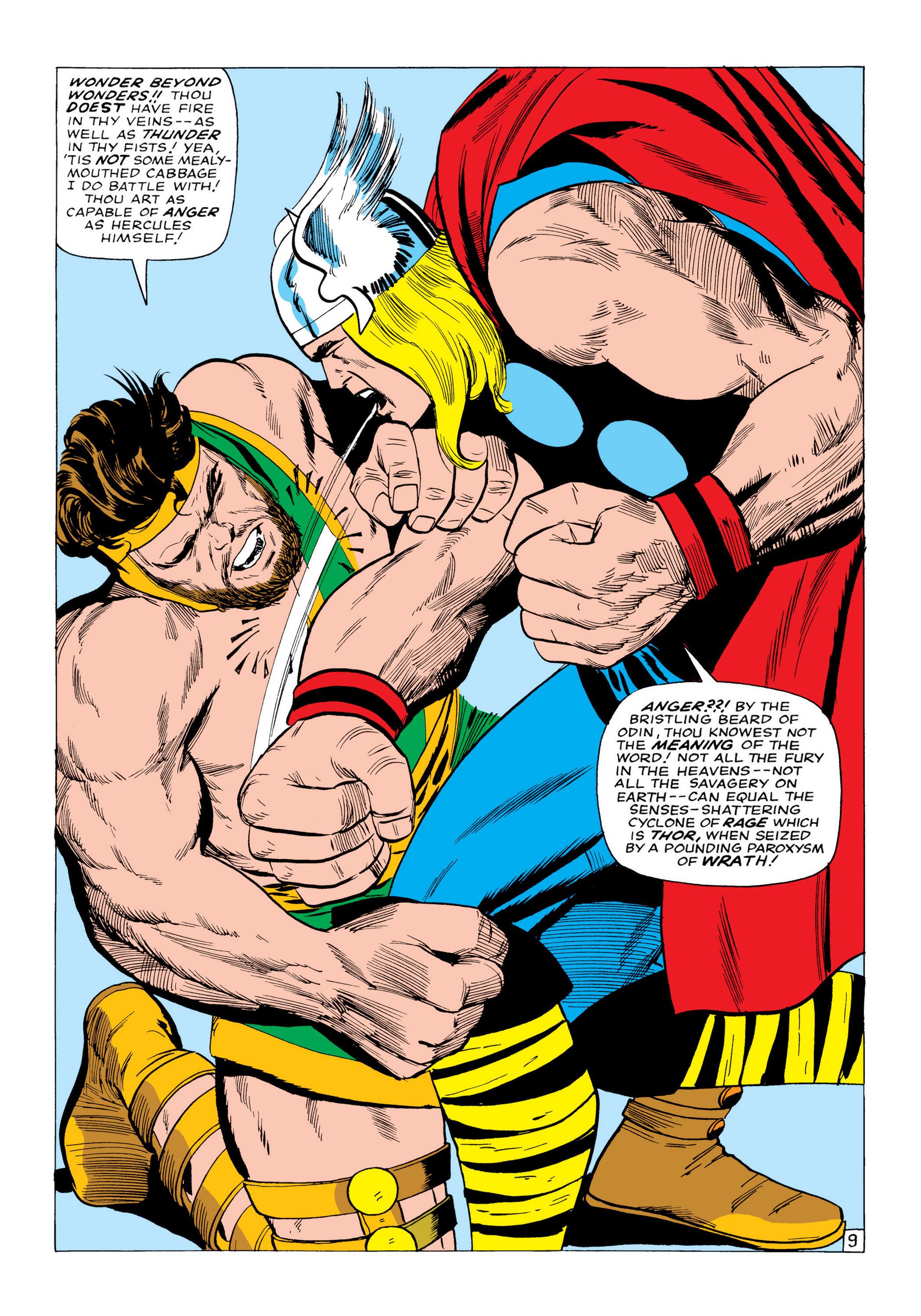 There’s no doubting the production quality of this massive oversized hardcover re-presenting the first three years of Marvel’s Thor strips from his 1962 début until 1965. Would that the story quality matched it. It’s not until the halfway point that the writing reaches competency, although while evolving a style that’s very different on the final pages to those opening the book, Jack Kirby is professional throughout.

Stan Lee plots the first two years of the run before handing them over to Larry Lieber and Robert Bernstein (credited as R. Berns) for dialogue. It’s only when read consecutively rather than from one month to the next as originally published that the paucity of the plots becomes apparent. Time after time the tension concerns the possibility of Thor being separated from his hammer for sixty seconds, at which point he’ll revert back to helpless Don Blake. This is due to an enchantment placed on the hammer by Odin, Thor’s father and ruler of Asgard, home of the Norse Gods. A good choice of direction is to involve the Norse Gods early, although the second most repeated plot concerns Loki’s ill will toward Thor. Also very melodramatic and over-used is Thor loving nurse Jane Foster both as hero and Don Blake, but she favours his heroic identity, spurning the human who disappears at the first sign of trouble. Odin, however, has decreed that Thor shall not love a mortal woman. It’s a plot that long overstays its welcome.

Kirby’s progression is a wonder to behold. The earliest stories pack in the panels per page, and Kirby is an artist who thrives on the big image, so he’s hardly seen at anywhere near his best here as the panel count reduces. He comes up with some nice designs, not least Thor himself, and the Absorbing Man is great. The art is also variable depending on who’s inking. Dick Ayres and Chic Stone do a good job, while Vince Colletta’s finer brushwork is mismatched on Kirby. Even that’s better than other artists Al Hartley and Don Heck, neither of whom can adequately convey Thor’s power.

It’s with the ‘Tales of Asgard’ back-up features that Kirby really shines. They tell of earlier days in Asgard, and despite them only being five pages long Kirby uses larger panels and his imagination really lets loose as he relates myths and supplies much of what would later feed into Thor’s strips. It’s the versions with their original colours used here, rather than the re-coloured strips collected in the Tales of Asgard graphic novel.

Bonus material includes introductions by Lee written for Marvel Masterworks collections featuring this material (Thor vols 1, 2 and 3), and that for the Thor segment in Origins of Marvel Comics, some Kirby pencils and the letters pages from the original comics.

While there has been some restoration to previously less than ideally reproduced pages, unless you’re determined to have every Thor issue in oversized format you’d be better off skipping this and moving straight to volume two, where the real quality starts. If you do want the earlier material how about considering it as printed in the Epic Collections The God of Thunder and When Titans Clash. Purchasing as the first three Marvel Masterworks hardcovers is also a costly exercise, but the paperback versions are good value. Cheaper still are Essential Thor volumes 1 and 2, although in black and white and with some shoddily reproduced pages. 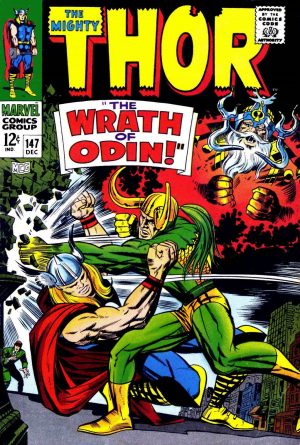 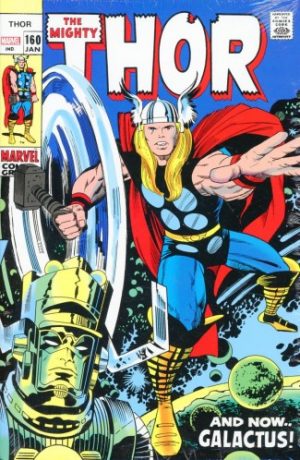