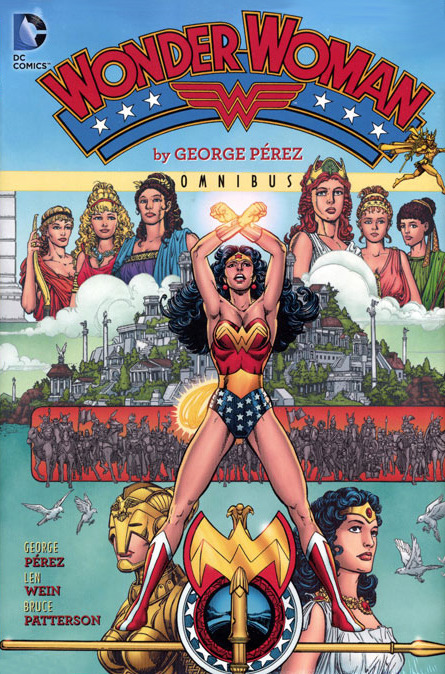 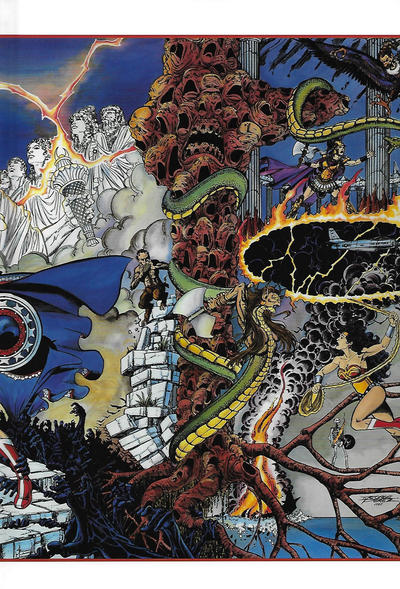 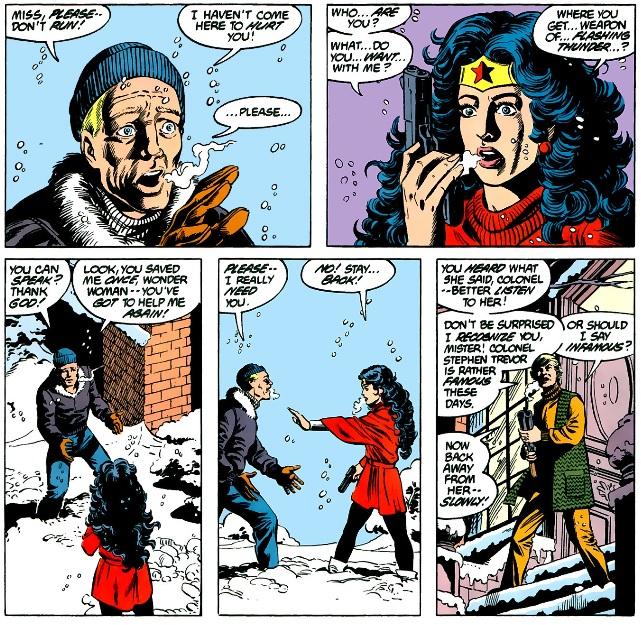 This collection brings together the first two years of George Pérez’s excellent run as writer and artist on Wonder Woman, presenting the material on glossy paper and in hardback.

In 1987, Pérez was a superstar who had worked on Fantastic Four and Avengers for Marvel, and then Justice League of America, New Teen Titans and Crisis on Infinite Earths for DC. He was second only to John Byrne as a fan-favourite, but, unlike Byrne, he had never written and drawn a comic series solo, though he had a strong input into the plotting of Teen Titans. In 1987, he got his chance with a relaunch of Wonder Woman. However, Pérez’s progress to full control was slow. He began writing with Greg Potter, and though Potter rapidly departed, leaving Pérez as sole plotter, Len Wein came on board to put words into Pérez’s characters’ mouths. Only in the second year did Pérez himself take over writing the script.

The first year was previously collected as Gods and Mortals and Challenge of the Gods, and is also available in Wonder Woman by George Pérez, volume one. It’s excellent. Pérez’s reinvention of Wonder Woman brings many new and original elements into play. Greek mythology is much more emphasised, and Pérez steps away from the mish-mash of Greek and Roman names found previously. Steve Trevor is an older man who is not a love interest for Wonder Woman, Etta Candy a USAF officer who becomes a love interest for Trevor. Both characters, however, are eased out in favour of Pérez’s new cast, historian/archaeologist Julia Kapatelis, her daughter Vanessa, and publicist Myndi Mayer. Princess Diana has no secret identity, is an ambassador from Themyscira rather than a crime-fighter, and turns down the opportunity to join the Justice League of America. As well as mythology, Pérez was inspired by feminist readings of Wonder Woman by the likes of Gloria Steinem.

Pérez’s enjoyment of plotting the Amazing Amazon’s adventures is reflected in the amount of effort he put into the artwork (see sample image), which matched anything he’d drawn to that point, and as good as anything being published at the time.

Sadly, the demands of this artwork proved too much, and he was forced to use rather looser pencils in his second year. It’s also apparent that, unlike Walt Simonson on Thor, Pérez wasn’t brimming over with ideas. The second year, previously collected as Beauty and the Beasts and Destiny Calling, definitely has its moments (notably ‘Who Killed Myndi Mayer?’), but it is distinctly less inspired than the first. Slightly oddly this collection leaves out a Superman/Wonder Woman story that Pérez finished over John Byrne’s layouts, and into which he seems to have had some plotting input. The story is terrible, so it’s no loss.

Whatever the weaknesses of the second year, compared to the grimness popularised at the time in Dark Knight Returns and Watchmen, the sunny optimism of Pérez’s Wonder Woman is a breath of fresh air. Unfortunately, after two years, Pérez was unable to continue drawing the series as well as writing it, and chose to concentrate on the latter. A second Omnibus volume covers the next two years of Pérez writing and being illustrated by other artists.