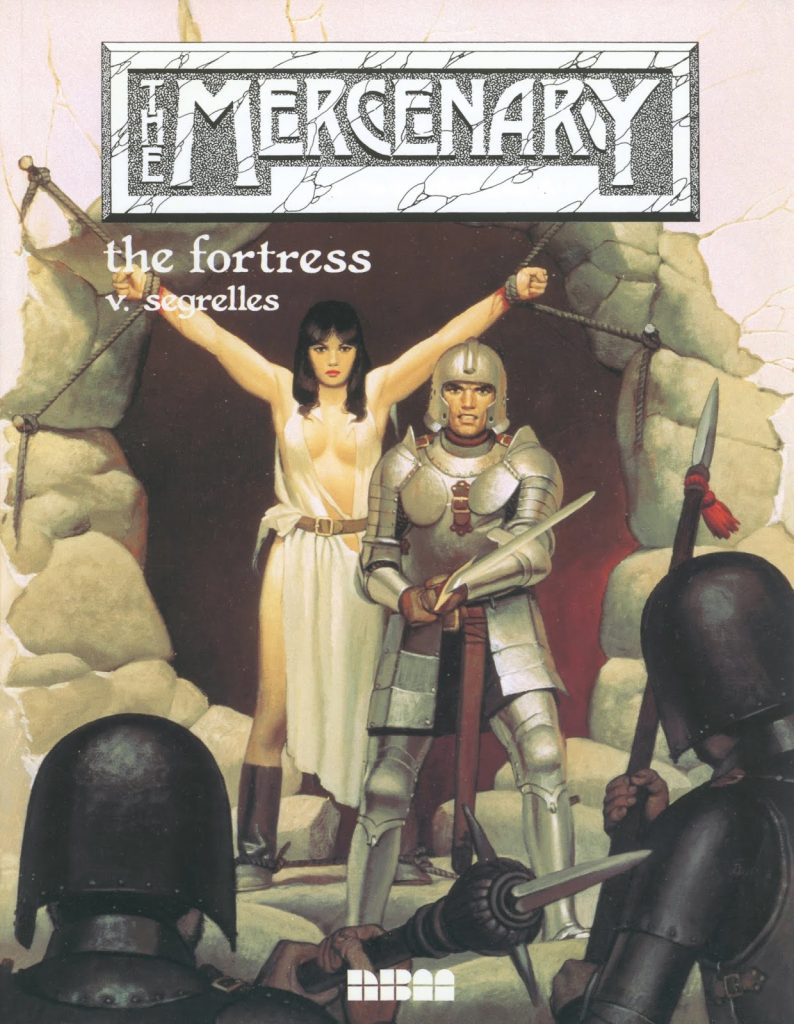 We met Claust in The Formula, an alchemist in need of a bodyguard, and feared by the Monks of the Crater, who we see in the opening sequence discussing how to infiltrate his fortress within which he hoards a vast arms cache. The mere threat of this enables him to intimidate neighbouring states. The monks believe, however, that they’ve found a weakness in Claust’s defences, and now all they need is someone foolish enough to risk their life to exploit that. The Mercenary’s odds are slightly bettered by virtue of the monks having developed a form of cannon.

The Mercenary may fly, and the structures occupied may be ornate and strange, but remove the fantasy trappings and he occupies a world roughly comparable to Earth’s middle ages, with the clothing and decorations reflecting this. Something Vicente Segrelles is excellent at is establishing just how much difference a suit of armour makes, and dealing in scale. Claust’s fortress, for instance is a massive structure, and therefore extremely intimidating when compared to the dwellings of ordinary people.

There are a few exceptions, but Segrelles almost always avoids lettered sound effects in his art, which gives a feeling of quiet and serenity. It’s entirely appropriate when the Mercenary is riding his dragon across the skies, but the lack of sound works against him on occasions such as the foundry scene on the sample art, where it’s equally calm. And in a strange coincidence, the way Segrelles draws the Mercenary in the final panel makes him resemble Dave Gibbons. What can it mean? While we’ve been used to great sky scenes over previous Mercenary volumes, Segrelles here provides equally impressive art showing a great wooden boat sailing at night, and then into the fog. Every panel being an individual, carefully considered painting means there’s little sense of movement, but Segrelles is aware of this and constructs his story requiring as little movement as possible.

If the setting is medieval, then the ending is pure James Bond, and even after just five stories (the opening two volumes combined two apiece) there’s a certain predictability about who’s going to survive to see another day. It’s still grand adventure, though, and both fans of quality painting and fantasy are still going to find much to enjoy in The Fortress. The Black Globe contains the Mercenary’s next adventure.