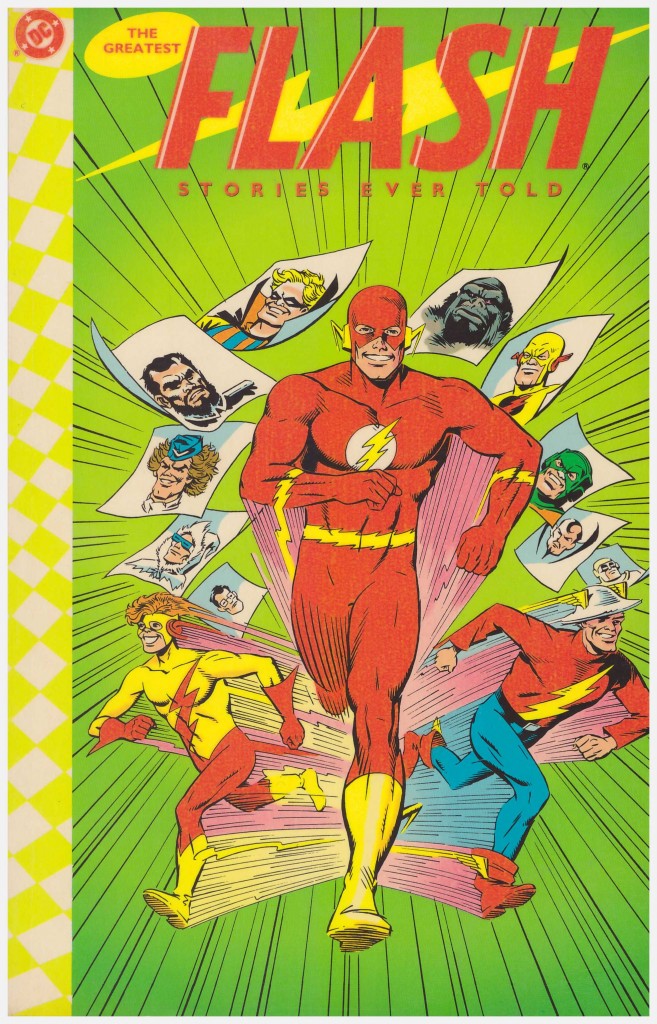 DC were a little slow off the mark in compiling a volume of Flash stories to entice viewers of his 1990 TV show. By the time this collection was released cancellation was imminent. However, in an era long before the widespread reprinting of classic material it was welcomed by comic readers.

Encompassing three separate iterations of the Flash, it’s an interesting selection, not least for the presentation of four stories not seen since the 1940s, and with the exception of Barry Allen’s introduction, deliberately avoiding tales that had been reprinted several times previously. While that might argue against the title, it’s realistic in assuming the largest market would be existing comic fans rather than curious TV viewers, who’d know no difference anyway.

One of the 1940s tales is written by science fiction great Robert Bloch. Sadly, it’s no better than those surrounding it. The 1960s stories now also fall into the category of limited appeal. They’re cleverly written, and the stylish art of Carmine Infantino is preferable to the all-action 1940s work, including a young Joe Kubert, but what dates them is a reliance on mystery and gimmickry rather than any characterisation. It shouldn’t be forgotten, though, that these were stories constructed for young boys, and if the super speed antics of The Flash weren’t enough, the likes of Trickster, Gorilla Grodd, Mirror Master and Captain Boomerang were colourful and engaging villains designed to thrill. There are also team-ups with Elongated Man, Green Lantern, the original Flash, and Kid Flash, but the best John Broome story here features no villains, just a young man’s future hanging in the balance if the Flash can’t locate him in time.

The oddest story in the book is the first Flash story supplied by the woefully under-rated Cary Bates. Hampered more by some ugly hallucinogenic art from Ross Andru than the villain of the piece, the Flash ends up on ‘our’ Earth and is helped on his way home by editor Julie Schwartz. The remainder of the 1970s material is written by Bates, who first mastered the John Broome style plot or gimmick driven tale, then delivered an extended character study over three years. Far too long to reprint in an anthology Bates is handed ten pages to précis the story. Alternatively check Showcase Presents The Trial of the Flash.

It’s fair to say Jackson Guice hadn’t developed into the artist he’d become when handed the task of drawing Wally West inheriting the Flash identity, and while Mike Baron presented some interesting ideas, on any impartial basis none of his Flash material could remotely be considered among the Greatest Flash Stories Ever Told. Still writing the comic series when the book was published earns him inclusion. Mark Waid and Geoff Johns were still in the future.

This is a reasonable collection of stories prioritising classic 1960s material, although well into the 21st century the entire content has dated in one way or another. Infantino’s art, once the very epitome of modern, now has a retro charm, and the plot driven stories are creative, but this is a collection for nostalgists. One caveat is to beware the vivid colouring. A production department not used to producing collections over-compensated somewhere along the way. This was a fault rectified for an updated collection of the same name in 2007.