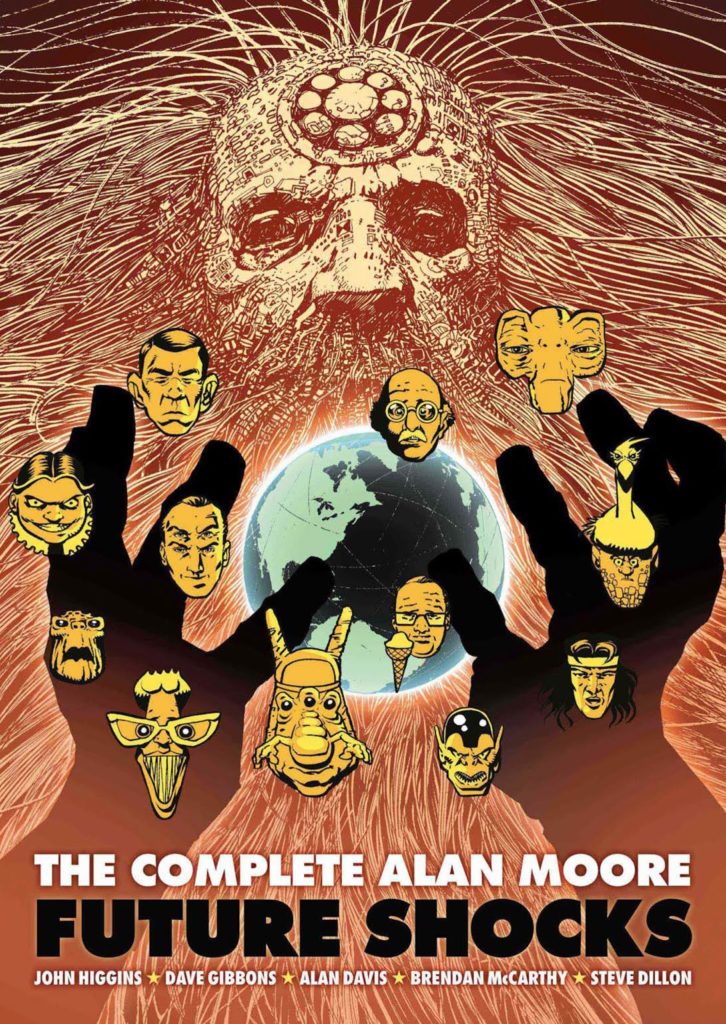 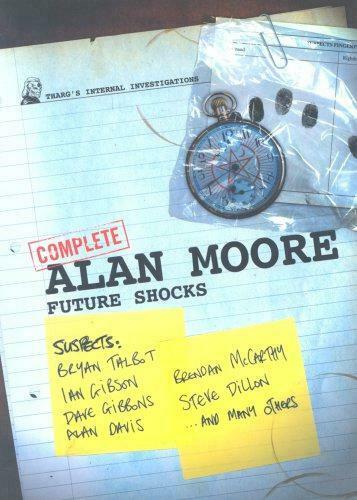 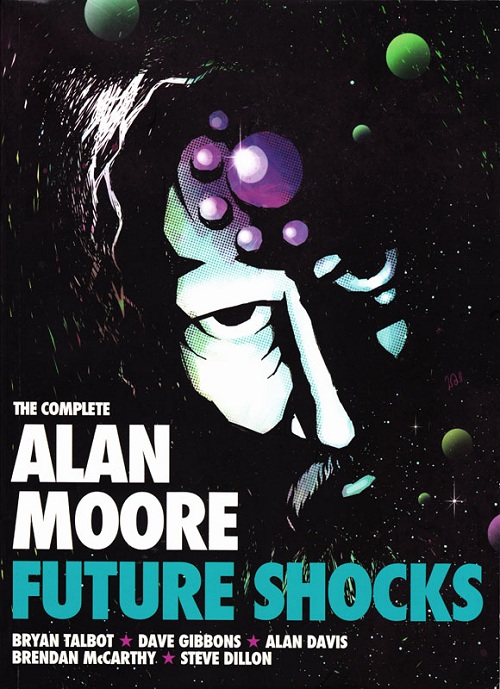 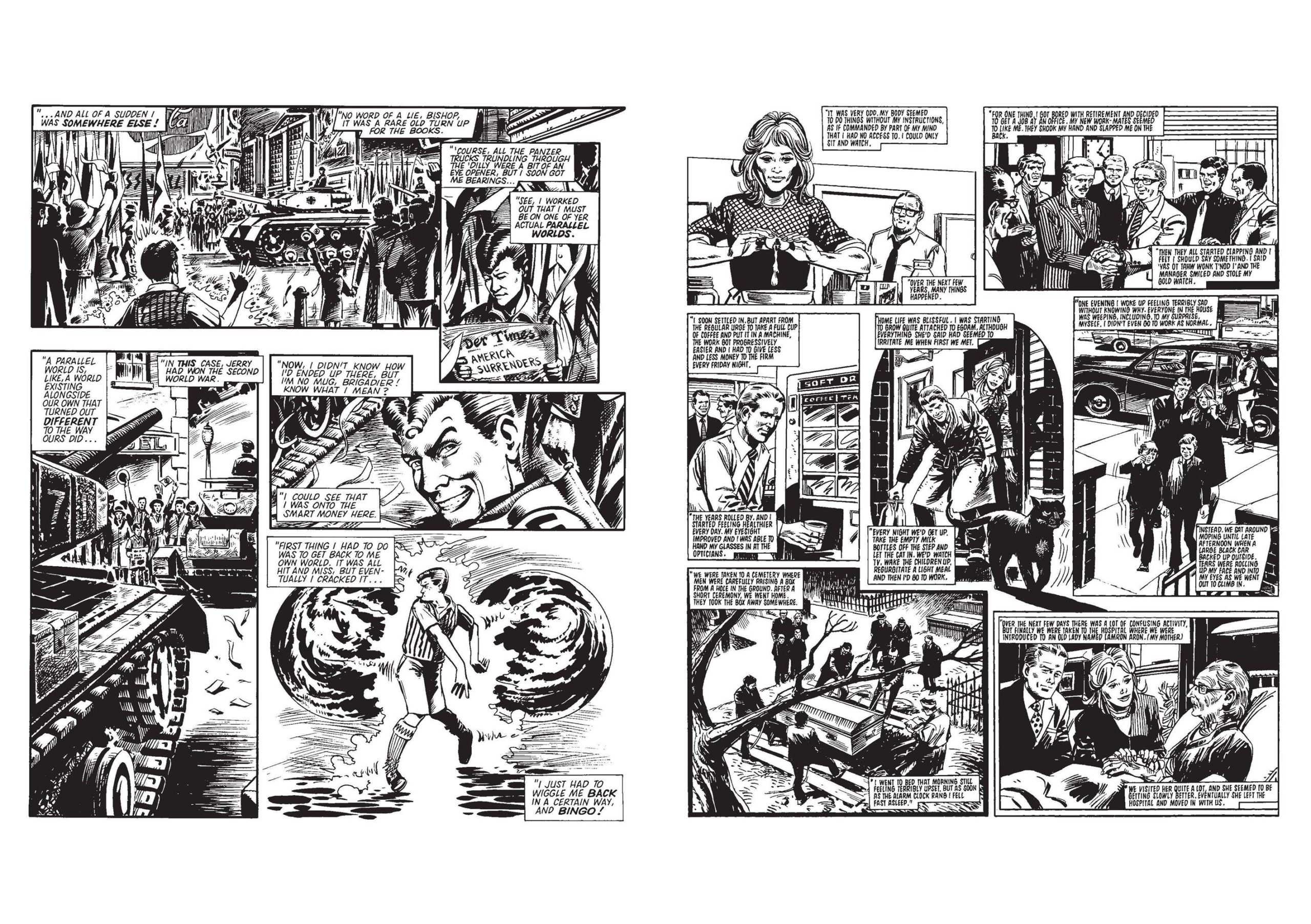 Considering his reputation, it’s perhaps surprising that it took until 2006 before a complete collection of Alan Moore’s short stories for 2000AD was published. In 1986 Titan published companion volumes Alan Moore’s Shocking Futures and Alan Moore’s Twisted Times, Moore introducing his own selections, and noting the compressing of ideas and characters into between two and eight pages was invaluable writing experience. The best of the stories missing from the 1980s volumes is drawn by John Higgins (sample art left) about a spiv who accesses alternate dimensions, using them to make a fortune.

Moore’s work is creative, prioritising humour as much as science fiction or the shock ending, and it’s a rare strip that isn’t very funny alongside the SF trappings. There’s a fair amount of parody, some remaining obvious, others faded with time, and Moore is excellent at establishing a personality from very few lines of dialogue. Despite the Australian speech patterns, the opening strip drawn by Ian Gibson actually parodies the way American tourists were once seen along with a British general, both completely delivered in a couple of panels. Little passing jokes abound, whether dropped into the dialogue or visual, the sight of space hero Rocket Redglare thirty years past his prime being one. For all the jokes involved, one of the most memorable experiences is the matter of fact narrative of ‘The Reversible Man’, Mike White (sample art right) providing the poignancy of an ordinary man living his life backwards. Another notable moment is Jesus Redondo illustrating the bleak moment a guy discovers how to go back through time. It’s closer in tone to Moore’s horror material than the remaining content.

Artists involved combine the best new talents around in the early 1980s along with several whose careers already spanned twenty years and a couple whose careers eventually didn’t involve comics, but whose work doesn’t look out of place. It makes for strange switches between stories, but enables the veteran White to gradually move away from the 1960s traditions. Known names not otherwise mentioned, but all good, are Alan Davis, Garry Leach, Brendan McCarthy, Paul Neary and Bryan Talbot.

The final five pieces all feature Abelard Snazz, the man with the two-storey brain and two pairs of eyes creating a disturbing visual effect. He hasn’t aged as well, the joke being that he’s considered a genius, being his own biggest fan, but anyone consulting him ends up far worse off. It’s a series of farces, the first and best drawn by Steve Dillon, Snazz’s suggestions ludicrous, yet all adopted.

In terms of quality the 1980s Titan selections distilling Moore’s work are better bets. Everything from them is included here, but Moore was aware inspiration didn’t strike every single week, and almost all stories not collected the first time round are either less involving or not as well drawn. This is most obvious when Moore is only allocated two pages, and the surprise endings become more predictable, although Billy the Squid vs the Clone Ranger still raises a smile as drawn by Dave Gibbons, treating it as a serious Western. Alternatively, there’s also a 2017 hardcover edition as part of the 2000AD Ultimate Collection partwork.