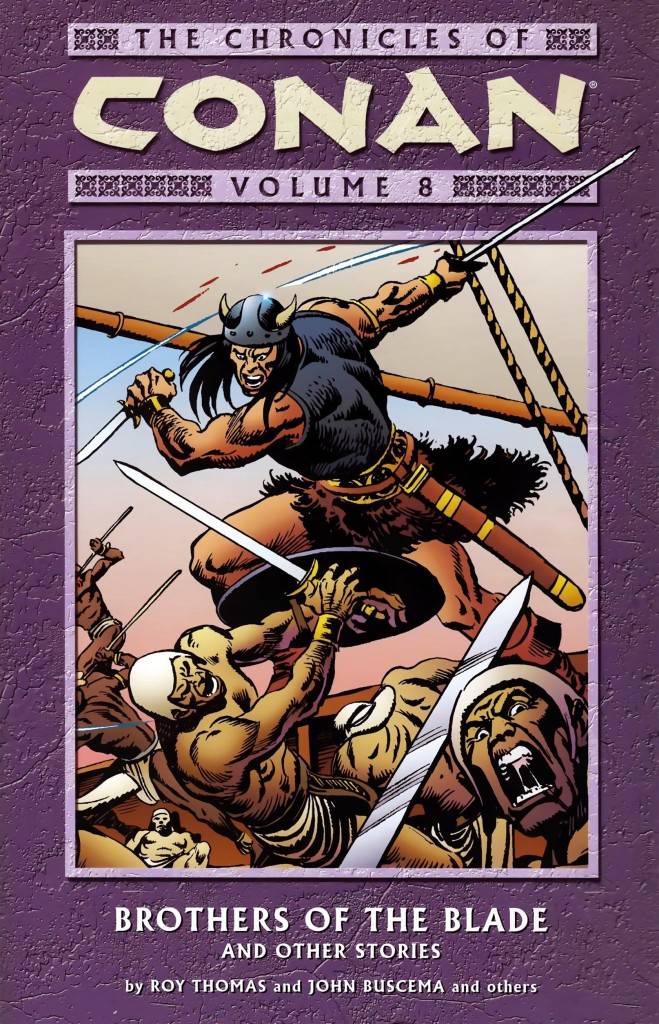 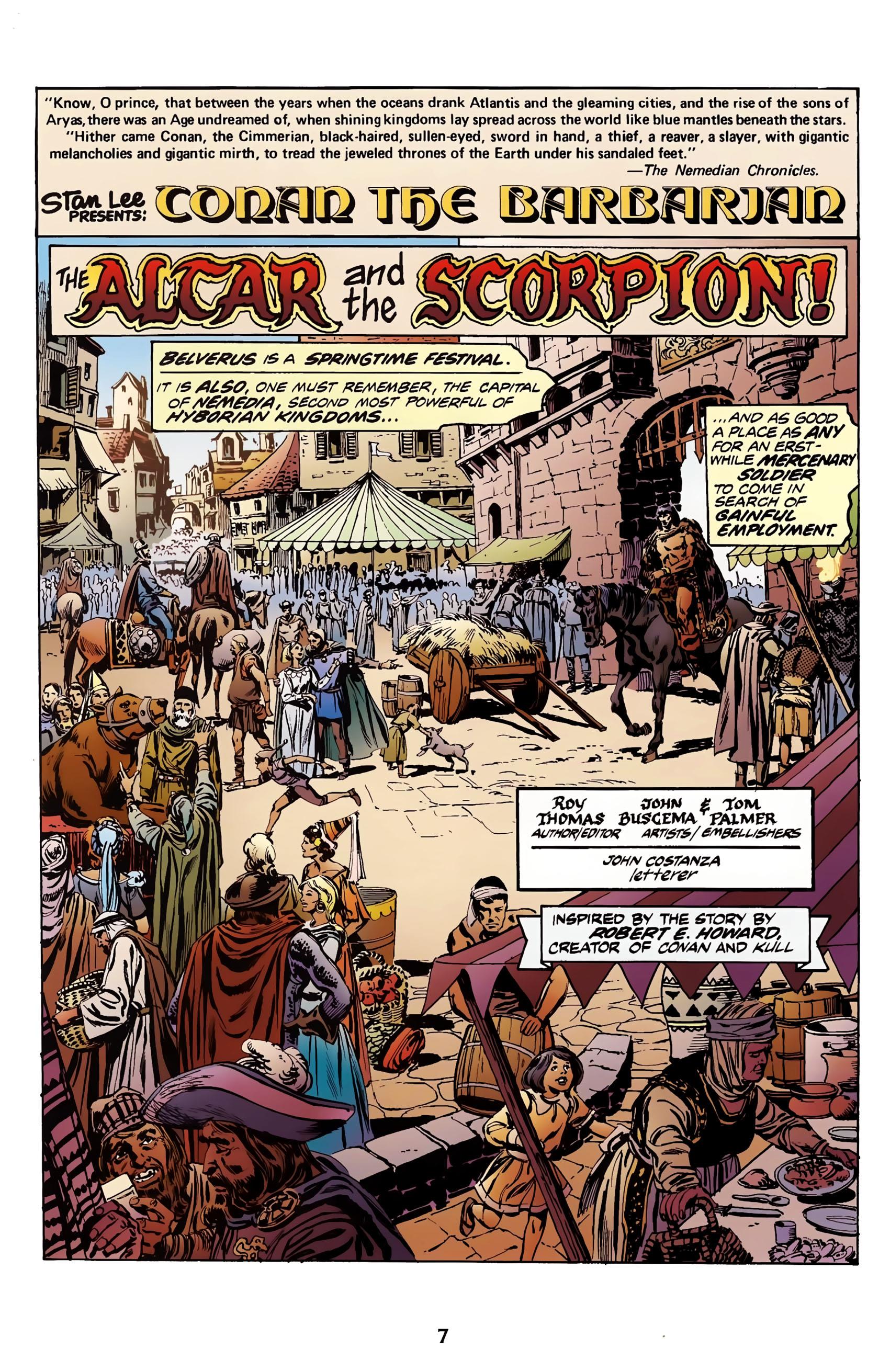 Volume 8 collects Roy Thomas’s and John Buscema’s defining run on Marvel’s Conan the Barbarian during the 1970s and opens with an adaptation of Robert E. Howard’s original story in ‘The Altar and the Scorpion’. Buscema pencils a stunningly detailed opening page that hustles and bustles into panels of exciting action. Conan signs on to the Crimson Company led by exiled noble and previous acquaintance Murilo (Rogues in the House), an acrobatic orphan named Tara assigned as Conan’s squire. There are some excellent homages to Hal Foster’s Prince Valiant as the Company enter an ancient city to find a cursed ring for the Ophirean city-state of Ronocco, at war with its neighbours Cornolla and Pergona and hoping to use the ring and a captive princess to consolidate their power.

In title story ‘Brothers of the Blade!’  it’s the small details of Buscema’s art that count, feelings of rage, fear and shock so evident on even the relatively simple faces. ‘The Oracle of Ophir’ is a rather unsettling storyline that segues into ‘A Shadow on the Land!’ To complete the Crimson Company story Thomas and Buscema channel film effects maestro Ray Harryhausen to give us a classic fantasy story that is scary despite the simplicity of its monster.

Thomas blends inspiration from a HP Lovecraft title with Brigadoon for ‘The Strange High Tower in the Mist’. Conan is travelling to Argos with Tara and former mercenary Yusef, the trio encountering a strange city suddenly arisen from the mist. Buscema works his magic here for a tale in which every element is pure Swords and Sorcery fantasy. Arriving in Messantia the capital of Argos, the trio run into trouble with pirates and crooked city officials (‘Incident in Argos!’). Mike Ploog was guest artist with captivating artwork that really captures the nature of the story.

In ‘Queen of the Black Coast’ Conan leaves Messantia in a hurry onboard  a merchant vessel that runs afoul of The Tigress, a pirate ship skippered by the beautiful Bêlit. Conan aficionados will remember that  Conan met her in the Howard story of the same name, the difference being that Roy Thomas would make Bêlit a mainstay of the series for three years and craft her a legend of her own. Part of the dialogue here was originally censored by the Comics Code Authority but Thomas’s intended dialogue features here. Thomas adds the back-story Bêlit required by having her shaman and mentor N’Yaga narrate it to Conan. It’s thrilling throughout and rounds off this volume superbly, with John Buscema returning after his short breather to give these final stories some vividly striking and highly detailed visuals.

Now that Thomas was relatively free of his duties as editor in chief, he was able to create more of his own Conan stories rather than relying on faithful adaptations of material by Howard and other authors. The difference is far more obvious at the end of this collection than it is at the beginning, as Thomas takes inspiration from family members, the Italian Renaissance and ancient Minoan culture. Conan already had a growing cult following by the time Thomas acquired the rights to adapt the character from the Howard Estate, but would Conan have reached the pop culture status he has now if it wasn’t for Thomas and Buscema? Conan would be around for a good while yet, the adventures continuing in Volume 9: Riders of the River Dragons and Other Stories.