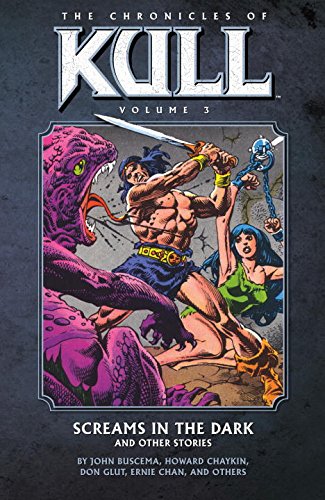 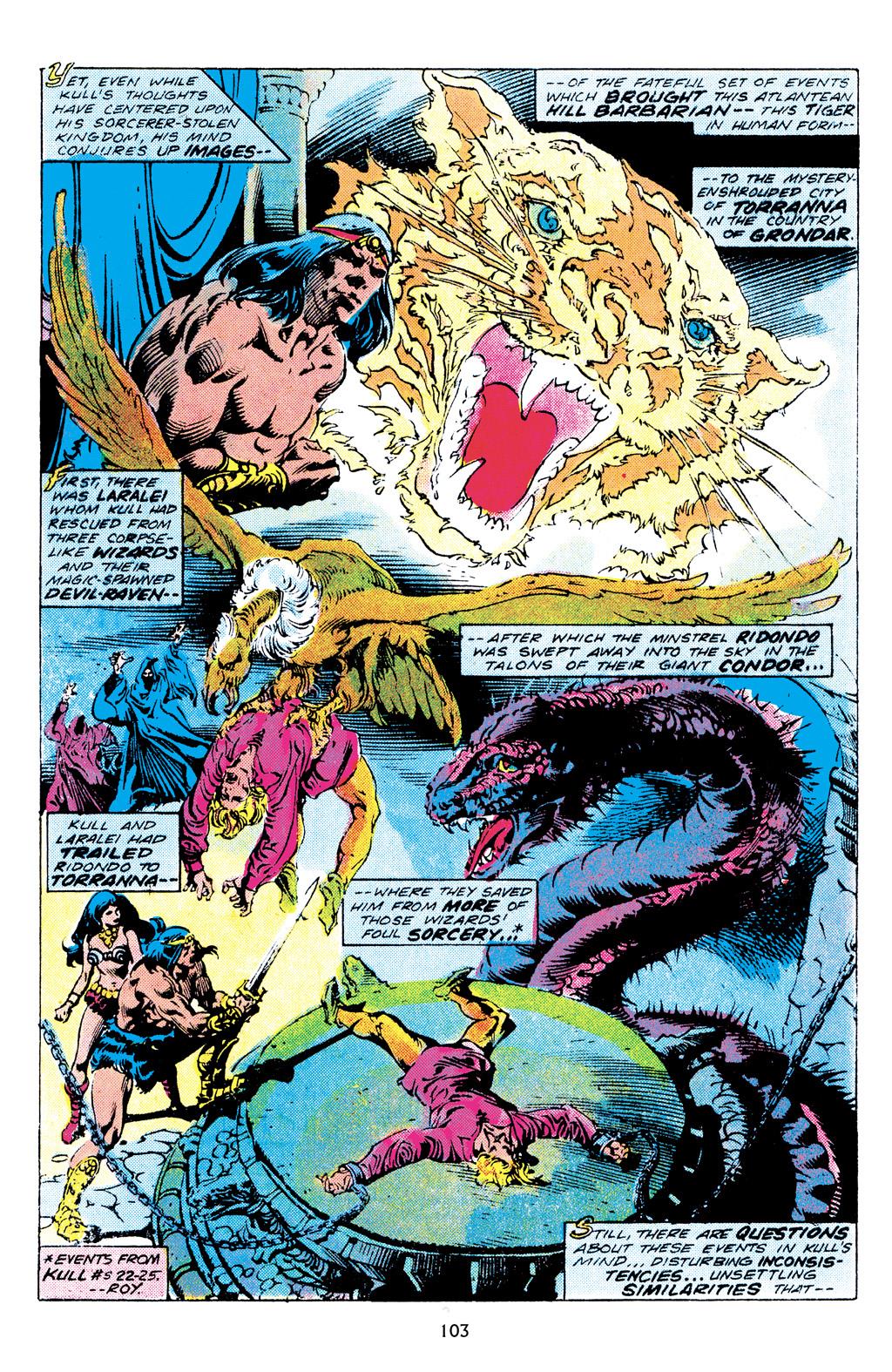 Originally issued by Marvel in the 1970s, their stop/start publication of Robert E. Howard’s Kull was a story of slow decline. Most of their best is to be found in volume one, A King Comes Riding, with one only the opening material of The Hell Beneath Atlantis matching the first volume. The remainder was average. Screams in the Dark makes most of that material look positively polished in comparison.

It’s now Don Glut writing, and it’s odd that the man who brought Kull to comics and wrote his best material, Roy Thomas, who’s now editing, can’t see the deterioration and rectify matters. The dialogue is wretched in places. As the book opens Kull is accompanied by former deadly and conniving enemy turned comic relief, Ridondo, and human ape Lorkar, and they’re later joined by Larelei. Kull still has designs on regaining the throne of Valusia.

Almost all the art is by Ernie Chan, who provides bland and cramped layouts. He only has one way of drawing sword-wielding musclemen, which coupled with Glut’s lack of imagination regarding the foes Kull faces, can’t but prompt comparisons with Conan. This version of Kull comes off very much second class. Chan’s at his best when the inks of Rudy Nebres halfway through the book provide some decorative flourish for a couple of chapters.

Glut is quoted in the introduction noting he had to complete his plots earlier than intended in a single issue, rendering it rushed. It doesn’t seem that way. If anything, it comes across as padded.

Thankfully there are some extras at the back of the book to wash away the bad taste, material gathered from outside the extended tale Glut was telling, and illustrated by better artists. Just two pages of John Buscema’s pencils inked by John Severin top all the art that preceded them, as one of Kull’s old foes turns up to plague Conan, requiring a flashback in that series, reprinted here. After that Thomas and Buscema engineer a three way meeting between Conan, Kull and Red Sonja. It’s spirited and unpredictable, everything lacking in the previous material, and Thomas plays fair by all three of Howard’s characters.

Steve Englehart and Howard Chaykin provide the finale, taking on the task of adapting a tale uncompleted by Howard and eventually finished by Lin Carter, ‘Beast from the Abyss’. It’s a nod of the hat to the stories of Lovecraft, and slight, but, again, better than any of the material by Glut and Chan.

The Chronicles of Kull continue with The Blood of Kings, and a real Kull comic highlight.