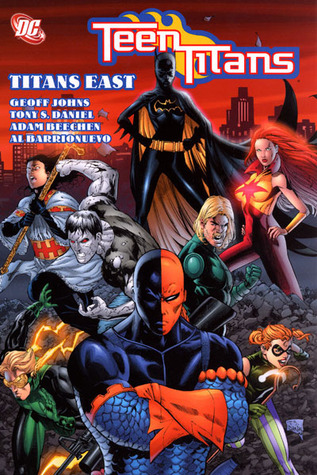 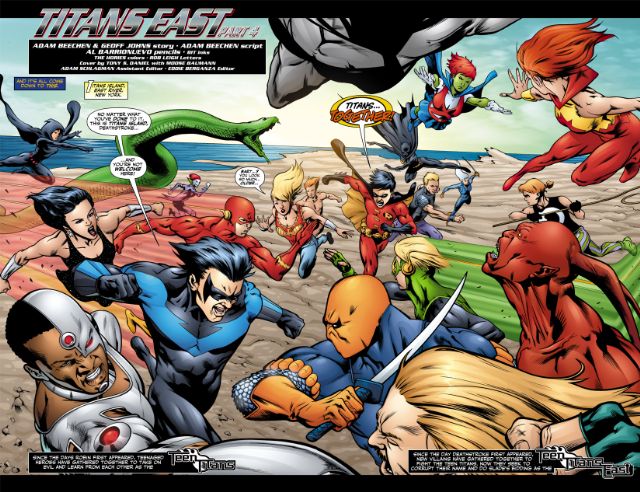 Titans Around the World reconstituted the teenage superhero team in clever fashion, including renewing an unlikely former member for use. Lurking in the background, though, was someone recruiting an alternative team of Teen Titans for their own purposes, in brutal fashion, and revealed on the final page. As Deathstroke is prominent on the cover, it’s hardly any great spoiler to note his participation.

Before that, though, there’s the schism between Kid Devil and Blue Devil to be dealt with, which is drawn in fine fashion by the always reliable Peter Snejbjerg. Why is this man not drawing more books? His page compositions are attractive, he never stints on the backgrounds, and has a way with emotional scenes. There are several here, as Geoff Johns has constructed quite the nasty tale. “I will give you the power you so desperately want”, intones the demon Neron, “but if that trust between you and (Blue Devil) is ever broken then on your twentieth birthday you will leave the world above.”

Johns plots the Titans East story, but it’s scripted by Adam Beechen, who’s the sole credited writer by the final chapter. Whoever’s responsible, originality is at a premium. There are a lot of fist fights, plenty of scenes of Titans being tortured while captive, some plot convenient allegiances, and Tony Daniel obviously having to work at a faster pace than on previous Titans material. He only lasts the single chapter anyway before the less imaginative layouts of Al Barrionuevo conclude matters.

Chris Batista draws the final chapter, a coda in which one of the more inconvenient characters is summarily disposed of, the Titans attempt to discover who’s responsible, and Beechen’s story just wanders to a premature conclusion as the next crossover hits. It’s all very perfunctory and uninspired.

Johns and original artist Mike McKone contribute a brief tale to the next collection, Titans of Tomorrow, but that concludes the involvement of the creators that relaunched the Teen Titans. Johns’ entire run can also be purchased as Teen Titans by Geoff Johns Omnibus.