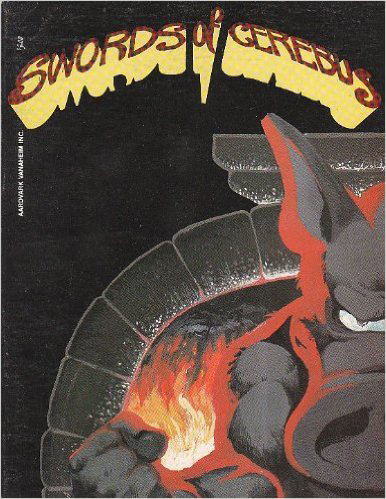 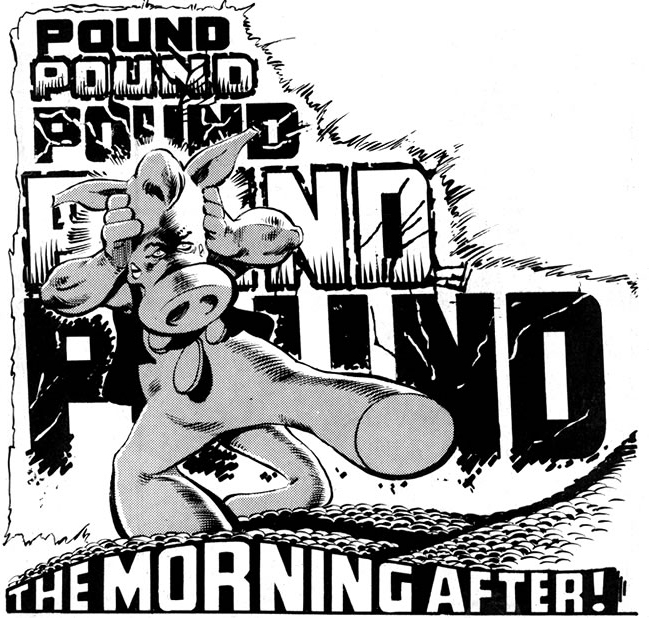 Volume two of the six-part Swords of Cerebus series opens with ‘Demonhorn’, an odd little five-page story that didn’t appear in the comic and doesn’t appear in the later Cerebus collection. It’s written in rhyming couplets. Sim is happy to admit that his tentative foray into poetry was a bad idea, badly executed, and one he would thankfully never repeat.

In his introduction to the first longer story, (originally untitled, but called ‘The Idol’ in the Cerebus collection), Sim admits this was a step sideways in the development and growth of Cerebus, a straightforward adventure that didn’t really move anything forward. From this point onward, after reading and being inspired by a Gil Kane interview, he strove to inject as many literary and mature sensibilities into the title as he could.

‘The Secret’ introduces Jaka, a tavern dancer that a drugged Cerebus falls madly in love with. Once the effect of the drug wears off, Cerebus forgets everything that transpires and abandons the broken-hearted dancer. Like many characters in these early tales, Jaka would return time and again, and would play a pivotal role in the life of our Earth-Pig. In fact, one of the later Cerebus novels, Jaka’s Story, is almost entirely devoted to her.

In his introduction to ‘Black Sun Rising’, Sim relates how this was the first issue in which he felt he was getting away from his attempts to draw everything the way Barry Windsor-Smith would do it, and his style becomes noticeably liberated in the process. The plot is broad farce, with mistaken identities and secret passage galore, and Sim would soon revisit this type of story, which always worked especially well when Lord Julius was around.

‘Day of the Earth-Pig’ sees Cerebus become embroiled with the Conniptins, a warrior race that would also re-appear later in the saga. From this point, every new element was thoughtfully considered and, increasingly, became part of a much more ambitious story than is obvious from these early tales.

As a bonus postscript, we get ‘The Morning After’, an absolutely delightful six-page standalone story written and pencilled by Sim and inked by Joe Rubinstein, in which Cerebus attempts to deal with the hangover from hell. Priceless.

It’s clear even from this early in the series that Sim was trying to stretch himself with each successive issue of his comic, and many characters that one would assume to be throwaways are anything but.  Their appearances here lay the foundations for the elaborately constructed plots that would come later.

The artwork, finally freed from Sim’s attempt to draw like Windsor-Smith, is much improved. It is still rough in many places, and very rough indeed in some, but is already beginning to show a great deal of improvement. The writing also continues to improve, and begins to move somewhat beyond the restrictions placed on it by the original choice of genre, though there were still many Conan touches to come before the title morphed into political satire in High Society.

‘The Morning After’ on its own makes this book a worthwhile addition to any fan’s collection, and there’s no denying that these volumes are nice little packages. The very readable introductory essays provide a valuable insight into the workings of a fledging comic that would go on to become one of the biggest names in self-publishing.