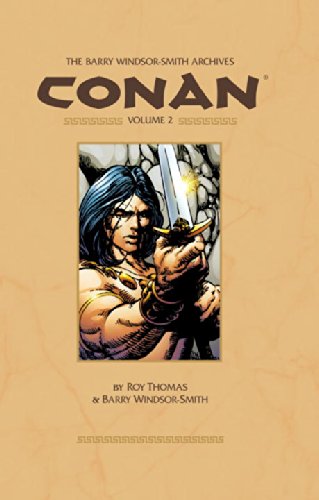 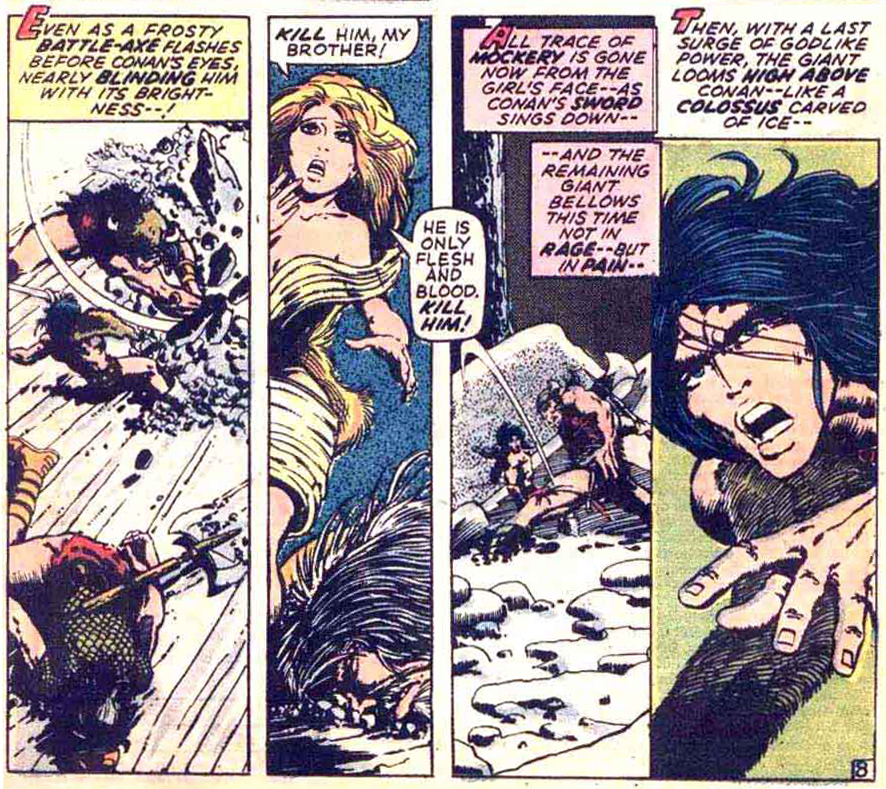 Barry Windsor-Smith is considered by many to be a fine comic artist, whose early work on Marvel’s Conan, alongside youthful and extremely enthusiastic fantasy fan Roy Thomas as writer, represents one of the finest examples, if not the finest example, of sword and sorcery comics.

Volume one of these archives allows you to watch Smith’s development from an artist who had carefully studied the work of American masters such as Jack Kirby to someone much more heavily influenced by the medievalist tradition of 19th century British art movement the Pre-Raphaelite Brotherhood. Ironically the work of the PRB is often characterised by stiffness, an illustrative rather then painterly interpretation when freezing a moment in time, and lack of perspective, which hardly seems suited to someone drawing comics. And as Smith’s work on the title progressed, although his splash pages and individual panels became more and more beautiful, positively dripping with texture and detail, his pacing became increasingly moribund. Never a strong storyteller despite his Kirby leanings, Smith became increasingly distracted by backgrounds and increasingly unable to direct the reader’s eye to the most important elements of the panels, let alone orchestrate what happens between them to move the story along.

There are some also-ran stories here and some which are pretty to look at but rather slight like ‘The Frost Giant’s Daughter’, but there are also some cracking tales: ‘Red Nails’ has just about everything a fantasy story needs, including Conan’s first love, another female freebooter; ‘The Dweller in the Dark’ which features another common sword and sorcery trope when a mad queen has Conan kidnapped to become her concubine; and ‘Web of the Spider God’, where Conan frees a city from the power of an eldritch force with an appetite for human sacrifice.  Additionally the volume collects things like Smith’s covers for the Conan Saga, and as a bonus gives us the ‘Starr the Slayer’ story that Thomas and Smith first worked together on in early 1970. There are some of Thomas’s finest scripts, the story in which he introduced his best-remembered Conan creation, the teasing pirate captain Red Sonja, and a team up with Michael Moorcock and James Hawthorne to produce a crossover with Elric of Melniboné. By this time Smith’s approach to art made him the perfect interpreter of Moorcock’s sardonic, elfin anti-hero.

While the two volumes of The Barry Windsor-Smith Conan Archives do make a very thorough job of collecting all of the artist’s work featuring Conan, because they are focussed on Smith, the miss out some fill-in issues of the regular comic by Gil Kane and John Buscema that were inserted when Smith started having deadline problems part way into his run on the title, so if you want the complete Conan comic you will have to look elsewhere. Such as the slimmer paperback format The Chronicles of Conan volumes 3 and 4. Or the Epic Collection The Coming of Conan, or the Omnibus Original Marvel Years.

The very thing which makes some think Barry Windsor-Smith is the greatest Conan artist ever is the very thing which makes others, even though they think he’s a great illustrator, regard him as a poor comic artist. If you want to decide, this is a fine place to start as Thomas and Smith did have ‘a moment’ on Conan. Their work together gave the franchise a certain freshness and youthful appeal, both were clearly having a great time, Thomas was absolutely in his element and working with Smith spurred him on to produce some lovely Conan illustrated stories… but are they really great comics?